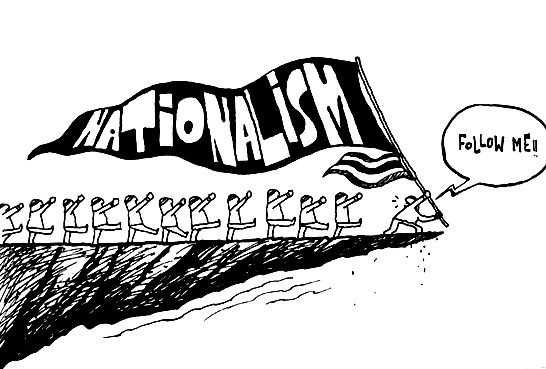 “MY COUNTRY, RIGHT OR WRONG?” – A FRIENDLY CALL TO ACTION

The number two seems to be everywhere in my life. I have lived in two countries, I’m doing two degrees, and I was born on the 2nd of March. Recently, I celebrated two decades of living and wasting my parents’ money. Most importantly, I’ve always felt that I am of two nations. I was born and raised in Indonesia, but my family is Chinese.

I admire my fellow Indonesians, of course assuming that there is one central Indonesian identity. I am proud of our resilience in the face of trials and tribulations, foreign and domestic. I am proud of our boundless optimism and faith in the better future, despite being continuously let down by others and sometimes even letting ourselves down. I love the fact that we were the first people to unshackle ourselves from the yoke of colonialism and to herald in a new age that rose from the ashes of World War II. At the same time, I feel just as proud about my Chinese identity – part of a community that is 1.4 billion strong and 5,000 years old. I remember listening in awe as my grandfather delighted me with tales of the rise and fall of kingdoms and dynasties, of grand fleets and expeditions, and of the unbroken entrepreneurs and wise men.

Indonesians and Chinese are both my people, and I love them equally – a feeling I think is shared by many of my fellow international students, particularly those from Asia. However, to love our history and way of life is one thing; to unflinchingly support a government because of this is another. The nation and the State are not the same. Pride in our history and culture should not blind us to the questions that our government and politicians have raised. Recent events in both Indonesia and China have indeed forced me to grapple with some troubling questions. I am not sure how to feel about politicians refusing to confront religious fundamentalism in Indonesia that threatens to swamp my home with hate and intolerance, with some politicians apparently tacitly approving. It is also a bitter irony that, a century after the last Qing emperor was deposed, China now has the closest thing to an emperor in power, with its government attempting to develop a ‘credit system’ that could deny public goods to millions of ‘untrustworthy’ citizens.

It is beyond my current ability to provide you with an explanation of why it has come to this. However, I have noticed a pattern has emerged in Asia – from India to Japan, from the Philippines to Thailand – of governments tightening control, abridging civil liberties, and stoking nationalist/sectarian sentiment. This pattern has a clear result: increasing authoritarianism. You may think that we do need authoritarians to show us the way in a world that is becoming less certain and more dangerous. But, to paraphrase Yap Thiam Hien, what’s the point of our people’s fight to be free from foreign oppression and dominance if we end up being oppressed by one of our own? For me, it is self-evident that increasing authoritarianism is unacceptable given the sacrifices made by people infinitely braver to free us from exactly that – authoritarians and oppressors.

However, I cannot answer for you. You may very well end up disagreeing with me and I will respect that. But I ask of you, at least reach this conclusion on your own. Do not base your conclusions on mere blind faith or peer-pressure. Do not feel that you have a sense of obligation to support the government unflinchingly simply because you love your people and ways of life. Do not support your government because of nationalism. In fact, don’t be a nationalist at all. Be a patriot! As Timothy Snyder said, a nationalist tells other people their country is the best; a patriot tells their country to be the best it can be. If you are going to base your support on the old adage: “My country, right or wrong”, then at least be aware that it is incomplete. The full version reads: “My country, right or wrong. If it is right, let it remain right. If it is wrong, let it be set right”. We must express our disagreement if we have any, either through demonstrations or the ballot box. For those who feel unable, remember that from little things, big things grow.

For all this talk about the 21st Century being the ‘Asian Century’, we still haven’t addressed the question of what exactly it entails. Will we see our world split, with countries ruled by paternalistic cabals of old men on one hand and countries ruled by holier-than-thous on the other? Or will the century bring something more? Something better? The answer to this greatly hinges on whether we should accept increasingly authoritarian Asia – and we students couldn’t be better placed to formulate the answer. We are fortunate to have access to the ANU’s wealth of tomes, books, journals, and research papers, as well as its academics, so let’s use them! We have, at best, six years and at worst, if you are doing a Master degree, two. I’m pretty sure there are enough days when we are not swamped by essays or exams and can do a bit of reading at Menzies or attend a conference held here on campus. We should also try talking with people from various backgrounds and differing perspectives. Making friends with them will help insulate you from any attempts to demonise certain groups of people, and will in turn insulate them from attempts at demonising you.

Whatever you decide, the worst option is to do nothing. To go home none the wiser about your country and apathetical about the direction the powers are taking it would be a great tragedy. If nothing else, care for the pragmatic reasons: to make sure we are not left to foot the bill for their mistakes.