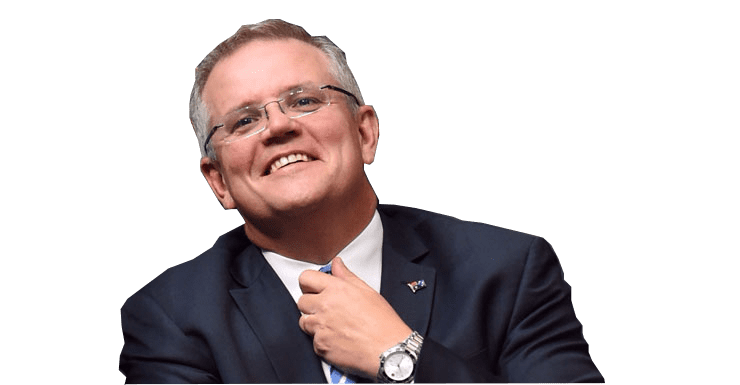 A group of prominent ANU campus activists launched a vocal protest against the government’s proposed changes to university funding at Parliament House on Budget night, just after the treasurer, Scott Morrison, had given his Budget speech.

The protesters also disrupted a Sky News broadcast on the lawns of Parliament House by standing behind the presenters with banners while chanting slogans.

Police confiscated the banners from the group of about 16 protesters when they approached Parliament House, where they continued to chant against the government’s proposals.

‘Education should be free, chuck the Liberals in the sea,’ they chanted.

The group also called for the education minister to come out of the building and meet with them.

‘[The government] want us to pay thousands and thousands of dollars more while giving millions of dollars of tax cuts to Turnbull’s mates at the big end of town – which is just absolutely disgusting,’ one of the protesters told the group, as they stood opposite police protecting the front entrance of Parliament House.

‘And we are here tonight when this Budget is being handed down to say to government, you know, that students are going to fight,’ she said.

She said that students on campuses all over the country had come out to oppose the cuts proposed by the government since they were announced before the Budget.

She described the politicians as ‘filthy, filthy, filthy, disgusting excuses for human beings’, saying that their proposals would be vehemently opposed by students around the country.

‘We are here because we demand, you know, more funding for education.’

Many of the protestors who were at Parliament House on Tuesday night were also part of the group which disrupted Birmingham’s speech at the National Press Club the week before. Birmingham described the protest as ‘side entertainment’ before continuing his address.

The National Union of Students education officer, Anneke Demanuele, said that she supported the protest which disrupted the education minister’s speech at the Press Club in Canberra.

‘Some might see it as destructive. But what’s not destructive about making students pay more for their education?’

‘It’s important for students to directly tell the minister for education what we think,’ she said.

Vanamali Hermans, who was among the group of protesters at Parliament House and the Press Club, told Woroni that she expects student protests against the government’s proposals, which she described as ‘fee deregulation by stealth’, would get bigger.

‘Any time Simon Birmingham or any Liberal MP sets foot on campus and tries to push this agenda they will be met by equal force,’ she said.

Student activists around Australia are gearing up for a national day of action (NDA) on Wednesday, in response to federal government proposals that would see student fees increase, young people potentially face drug testing before receiving welfare payments and scant effort to make housing more affordable.

The coordinated protests, which are being organised by the National Union of Students (NUS) with campus activists and student unions, will see demonstrations take place on campuses across the country. At the ANU, protesters will meet at Union Court at 12.30pm to condemn the federal government’s changes to the higher education funding model.

The ANUSA education officer, Robyn Lewis, said that it would be financially unsustainable for graduates to pay their student loans back when earning a salary a ‘long way below’ the median income.

The federal education minister, Simon Birmingham, said that the changes would amount to a ‘modest’ fee increase. ‘Students will face a small increase that on a weekly basis equates to about $17 for the highest level of fee increase that any student could possibly face,’ he said.

But Lewis urged students to ‘get active on this issue’.

‘Students have fought back successfully against this government before, and we can do so again,’ she told Woroni.

The president of the NUS, Sophie Johnston, said that there was ‘nothing fair about this Budget’ and that it had ‘no sign of opportunity’ for young people.

‘This is war on young people and we’ll be fighting back,’ Johnston told reporters in Canberra on Budget night.

Issues relating to this year’s Budget were discussed at the ANUSA Education Committee meeting on Wednesday, 10 May. The committee has maintained an active presence in Union Court since the release of the Budget, consulting with students.

It is believed that members of the NUS and the National Tertiary Education Union (NTEU), as well as Unions ACT, will be present at the NDA event in Union Court on Wednesday.

The education committee is currently sourcing supplies, such as posters and megaphones, for the event. All previous posters were confiscated by the AFP following similar protests against student funding.

Woroni understands that the ANUSA education officer, Robyn Lewis, had discussed planned student protests with police following the protest at the National Press Club and at Parliament House on Budget night. Of particular concern was the safety of the Chancellery from protest groups in coming weeks.

The NUS is calling on students to a petition against the government’s Budget measures. On Friday evening it sat at 500 signatures short of its 7,000-signature goal.