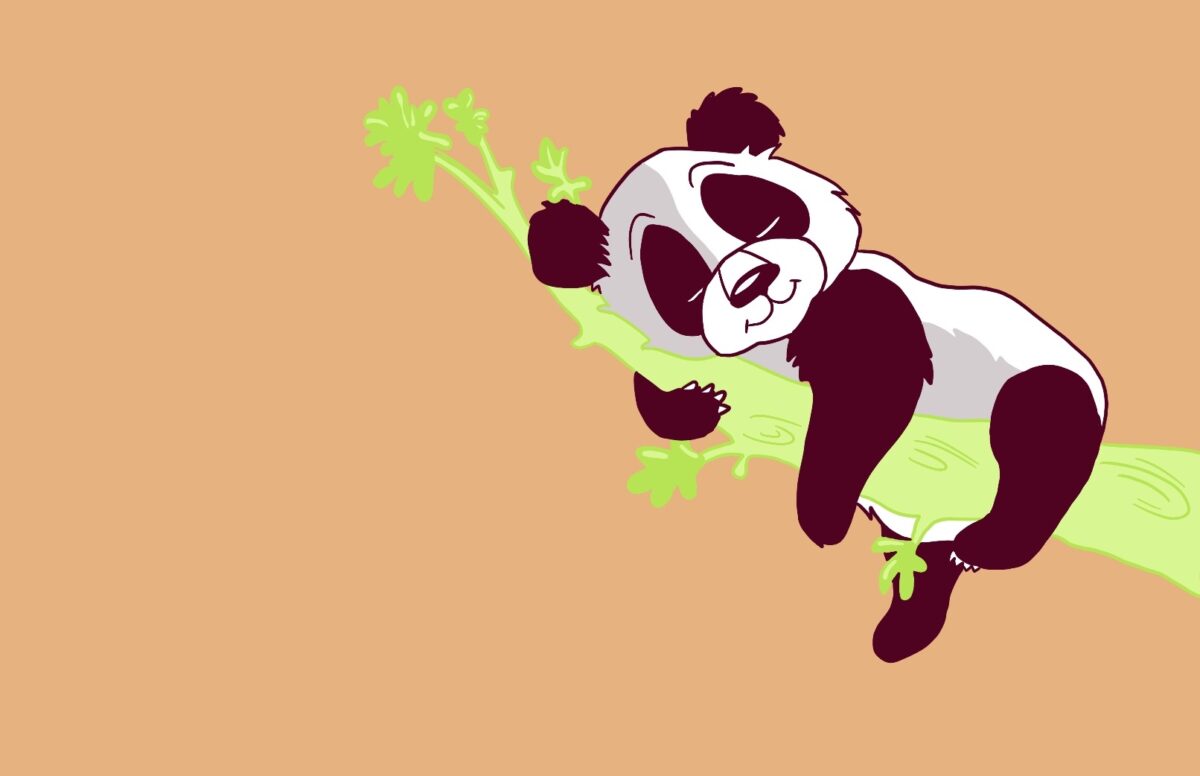 If you search ‘pandas’ on Youtube, you will find hundreds of videos with titles such as AWW SO CUTE!!! BABY PANDAS Playing with Zookeeper or Panda Funny Moment Videos Compilation. Instead of attending to my growing pile of uni work, I like to watch these adorable creatures cause havoc, tumble and roll around, and menace their keepers. They struggle to walk around without tripping on flat grass, are frightened by their own farts, and always inexplicably find a way to fall off literally anything. It’s like they’re trying to go extinct.

It made me wonder – how on earth did evolution fashion one of the most extinction-able animals possible?

The evolutionary biologist, Stephen J Gould, was thinking the same thing. He probably wasn’t watching Youtube in the 1980s but his book, The Panda’s Thumb, was inspired by boyhood trips to the zoo. Gould observed that pandas were capable of deftly stripping the leaves from bamboo stalks with the assistance of an apparently ‘flexible thumb’. This puzzled the young Gould who had learned in school that a supposed hallmark of primate superiority was the development of an opposable thumb. With this, chimps and the like could hold onto things to make the tools that differentiated them from other animals.

Yet the panda wields a seemingly identical structure. Upon closer inspection, the panda’s thumb isn’t actually a thumb at all. When you look at its paw, you would see that it actually has six digits, not five. So did the panda develop an extra finger? Not quite. The panda’s ‘thumb’ is actually an extension of a bone that we also find in humans, namely the radial sesamoid. This pseudo-thumb is also pretty terrible at its job. It is clumsy and characterised by a painfully limited range of movement. A first-year engineering student could have done a better job of designing an alternative.

Yet there are numerous examples of ‘poorly’ designed structures in nature. Gould argues in his book, however, that these embarrassing feats of biological engineering are more compelling evidence for evolution than the perfectly suited structures that are typically used in your biology textbook.

Briefly, evolution, as put forward in Charles Darwin’s seminal work The Origin of the Species, is a process of adaptation by natural selection. In other words, an organism featuring traits that are favourable for its environment is more likely to survive, have many offspring, and pass on its genes.

A common misunderstanding, however, is that an animal chooses to survive better. A cheetah cannot choose to have faster offspring.  More accurately, a mutation, or several, that allow for stronger muscles arises spontaneously in one cub of a litter. That fast, young cheetah is more likely to catch prey and, in turn, more likely to produce offspring which will inherit this mutation and be fast little cheetahs and so on. Organisms, thus, adapt to their environment through almost a process of iterative testing to allow for a specific trait to dominate a population and eventually become a primary characteristic of that species.

Yet within this paradigm we still see so many supposedly poor examples of adaptation. How can we reconcile the panda’s simple pseudo-thumb with the almost divine excellence of the evolutionary process?

We might actually observe that the panda’s pathetic excuse of a thumb fits neatly into Darwin’s theory. A marvellous thumb does not arise spontaneously. Natural selection has to work with what it’s got. In a way it’s in the name –  nature selects traits that are already in a population. At some point in the panda’s ancestry, a hypertrophic radial sesamoid in a random panda turned out to just get the job done and there was no real need for a structure with extra bells and whistles.

We can see examples of poor adaptations in ourselves too. Before we dive into these, it’s first important to understand that evolution is characterised by a never-ending struggle between organism and environment. As the environment changes, the organism tries to catch up. Sometimes there’s a bit of a lag which has led to a number of distinctly modern ailments as humans change their environment with incredible momentum. A clue to these organism-environment mismatches can be seen in conditions whose prevalence is growing with astonishing speed.

As an example, autoimmune conditions such as inflammatory bowel disease, lupus, and arthritis are thought to be increasing in prevalence by a dizzying 3–9% a year. With no obvious changes in our genetic makeup within the past few decades, the culprit seems to be a change in our environment. In this case it might be linked to the consumption of fast-food. This stark jump in the evolutionary timeline from fibre-rich whole foods to burgers containing more sugar than protein is thought to have altered our gut microbiome which might trigger autoimmune diseases. This is just one of a number of examples where the human body and our modern lifestyles appear to be mismatched.

Perhaps our view of the panda’s supposed evolutionary inferiority is conceited. Why would they need an opposable thumb when their little stump will do? Why do they need to drive cars or run around really quickly when they can just look cute and let us bring the food to them? The most convincing argument for evolution is perhaps not the existence of the perfect animal, but rather the many examples of imperfections as a result of working with what they’ve got. Just like that uni assignment you’re supposed to be working on right now, nature sometimes realises that a mediocre job is still a finished job. As they definitely don’t say – while the panda works hard to go extinct, natural selection works harder.

Road to Nowhere - Part I

11.4.2022 by Another Disillusioned Millennial
Read Article