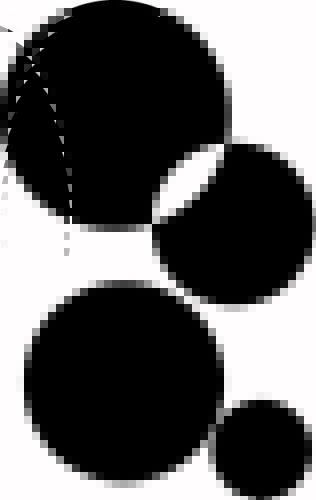 In the 19th and 20th centuries, apocryphal medical claims introduced the idea that men require regular sexual activity for good health. Male sexuality was expected to be active and aggressive, with many fe- male partners and extramarital relations. Female sexuality, on the other hand, was expected to be passive, sterile, monogamous and lesser. This led to the normalisation of male sexual degeneracy.

Male scientists argued that male sexual traits were products of evolutionary instinct and sexual physiology. Promiscuity, virility and sexual domination, they claimed, were within men’s nature.

Without doubt the man has a livelier sexual need than the woman… guided by a powerful natural drive, he is aggressive and stormy in his love-play.

Woman is quite different. If a woman is mentally normally developed and well-raised, then her sensual desire is scant.

Wood: Here an act of grossest indecency occurred. Mr. Wilde used his influence to induce me to consent. He made me nearly drunk. [testimony censored]….Afterwards I lay on the sofa with him. It was a long time, however, before I would allow him to actually do the act of indecency.

Gill: I understand you to say that the evidence given in this case by the witnesses called in support of the prosecution is absolutely untrue?

The spread of STIs – syphilis and gonorrhoea, then HIV and AIDS – symbolised this degeneration. Advances in medical understanding led to a greater awareness of STIs. Syphilis was a sign of sexual de-generation because of its obvious visual stigmata: pustules, rashes and ulcerations. The spread of STIs was seen as a failure of public health.

Men, being sexually promiscuous, became vectors for disease. Men with STIs were corruptive influences on family life, capable of inflicting diseases from extramarital partners onto their wives. Damage could also be passed to offspring: syphilis caused stillbirths, miscarriages and physical deformations.

He examined with minute care, and sometimes a monstrous and terrible delight, the hideous lines that seared the wrinkling forehead, or crawled around the heavy sensual mouth, wondering sometimes which were the more horrible, the signs of sin or the signs of age.

Ennis Del Mar ain’t been in, has he?

AGUIRRE glares at him even harder. The wind hits the trailer like a load of dirt coming off a dump truck, eases, dies, leaves a temporary silence.

You boys sure found a way to make the time pass up there. 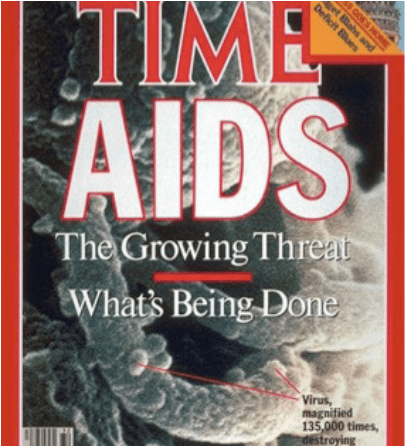 JACK gives him a look, then sees the big binoculars hanging on a nail on the wall behind AGUIRRE’s head.

Twist, you guys wasn’t gettin’ paid to leave the dogs baby-sit the sheep while you stemmed the rose.

…the virus that causes AIDS.

Have you ever used intravenous drugs or had any homosexual –

RON spits out his candy.

Homo? Homo? That’s what you said, right? Shit. You gotta be kidding me. (laughs) I ain’t no faggot, I don’t even know any faggots! Look at me, doc. Come on now, look at me. What do you see? Huh? The god- dam rodeo is what you see. 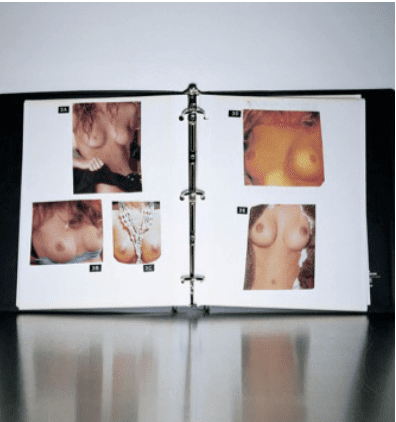 – Cara Phillips, The Boob Book, 2012. From Phillip’s series, Singular Beauty: Technology has enabled us to correct and enhance our bodies with an endless array of procedures that promise to make us younger, thinner, sexier and more beautiful. Plastic surgery is one of many industries that affirms male sexuality as the lens through which women are seen.

The ‘Male Gaze’ doesn’t apply to him. He loves women. He treats women well. He can’t stand that his eyes follow the latest one into the coffee shop, her buttocks squeezing and unsqueezing in black active- wear as she walks to the counter. He will admonish himself later. She’s made her order and walks to the other side of the counter, giving him the opportunity to look at her profile. Her breasts aren’t very big, held tight by a sports bra under a loose-fitting white top.

He turns back to his own coffee. He wouldn’t look for long. He barely even notices himself doing it. Habit? He would scoff if you said it to his face. It’s an atavistic trait, primal even. All men do it. He doesn’t mean it, the guilty, compunctious, delicious, unintended leer. He wonders who she is, the woman caught in his gaze, as if this shred of empathy could save him. He does not hear her name as it is called out by the bearded man behind the coffee machine. Takeaway. This is his cue. He hasn’t intended this either. He gets up and beats her to the door. Really she’s not his type. Bottom-heavy. Frizzy hair struggling to be contained by a bun. But that doesn’t stop him from holding the door open and trying to catch her eye, his grin flashing like the emergence of the bright sunlight through the door.

I was not too crazy about sleeping with girls I didn’t know. It was an easy way to take care of my sex drive of course, and I did enjoy all the holding and touching, but I hated the morning after… the girl would wake up and start groping around for her knickers and while she was putting on her stockings she’d say something like, “I hope you used one last night. It’s the worst day of the month for me”.

Note on the below figure: it is clear here that women have disproportionately experienced dating or partner violence. 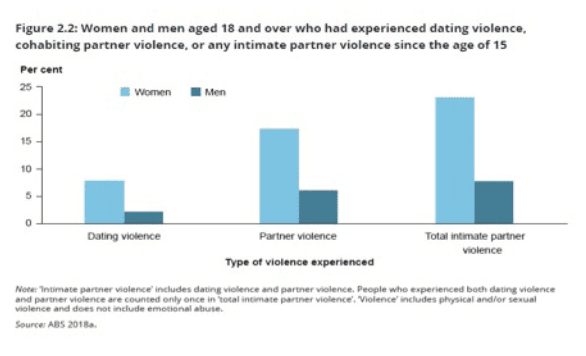 Note on the below figure: 10.8 per cent of men and 5.5 per cent of women have experienced violence in the 12 months before the 2005 survey. This may seem surprising; however, total violence includes violence inflicted on men, by men. Women experienced over double the amount of sexual violence or violence from a partner, committed by, to an enormous extent, men. 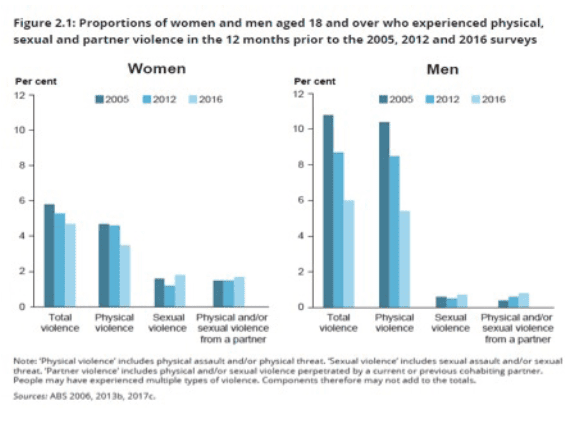 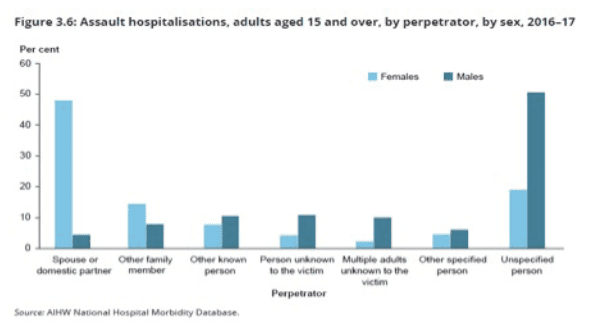 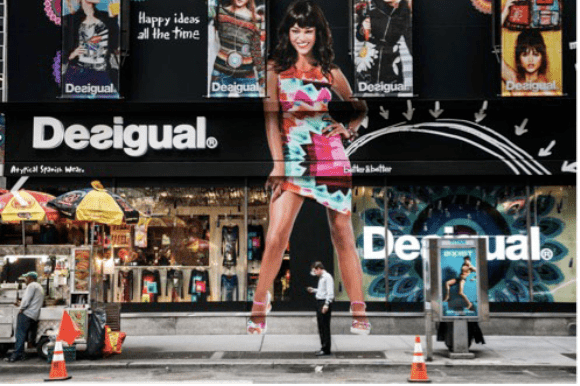 …all part of a grand narrative in which male sexuality is directly responsible for women’s subordination. Women can’t equally compete in economic, political and social systems that privilege individual output because of the demands of pregnancy and childcare. This translates into overall subordination, enabling men to sexually dominate women and force women to service their excessive sexual lust…

Are you in your tote bag? In the plants? In the bad faith sods-stream (Palestinian tears)? In your rug? In the city’s half-assed attempt to recycle? In your tribe? In your kink? In your place of employment? In your wage packet? In the likes? In the rejections? In your documentation? In this sentence?

Note on the below figure: sexual assault rates have risen between 2011 and 2017. Around 60 per cent of women and 50 per cent of men have experienced both inappropriate comments about their body or their sex life, and unwanted touching, grabbing kiss- ing and fondling. I hate the whole ugly circus.

I love fashion but then there’s the smoke-pumping, toxin-burning, forest-shucking stuff. There’s finger- nails holding together the stitching of the new Nike Air Max Flyknit. I bought something yesterday – on- line, of course – and hated it and now the ship will travel right back to where it came from. What are these ships? I think of an overhead shot, the vessel sitting on the clean black slate of the sea, long and straight like an enormous phallus with the bow as the head.

I want to be cool. I spent three hours and three minutes per day on my phone last week. When you’re trapped in a well and all you can see is the small opening far above you, it becomes your whole world. Your view will never be as straight, as uncomplicated as it is then. Who can even say what I did on my phone for three hours? Not me, that’s for sure. I’d throw the thing out but every time I try to the wires come out through the charge port and cut their way into my hand, and at each small puncture a drop of blood seals the deal.

I’m on the bus and my head is rattling around just like everyone else’s, but we’ve all got Airpods in and are calmed by the various things we hear. I’m hungover. I bet there’s some function through which we could all sync our Airpods together to listen to the same thing (if anyone could do it, Apple could! Haven’t you seen their Facetime ads?). We’d all be there, a harmonious little group connected by our bus route and our collective music. But instead we’re all tuned out. At the station, a man is cleaning the floor by the toilets with a huge, wheeled, electronic, ride-on mop, whose loud whirring creates a different aural buffer, encasing him and rendering my Airpods useless.

Instead I sit out the back with the rest of the lot, and yeah I smoke with them, but I don’t say anything, I just sit in the dark like the real world is all inside my head. I don’t even wonder what people are thinking of me like I do every other time of the day. I can barely be seen in the half-light of the candle and the flare of the joint.

I’m in a funk for the rest of the week. I watch people as they do what people do. I see women on TV, on glossy snapshots in the hairdresser windows, on Facebook. I see one standing at a traffic light in a nude-beige skirt and a severe black worktop, mimicking perfectly the stance of a model on a large billboard over the top of the city: a tiny simulacrum.

What smog-filled metropolitan vista will visit me to- morrow? I’ll watch them all again. We’re filled up with the same stuff, it goes into us all: defiled air, social overload, falsity, coercion, blue light, flashing impulses. Here our sex is used against us: every frisson amplified, every thought seized upon, we crowd each other out. I’m one of them: a leech sucking on society, the blood turning black inside, black bile.