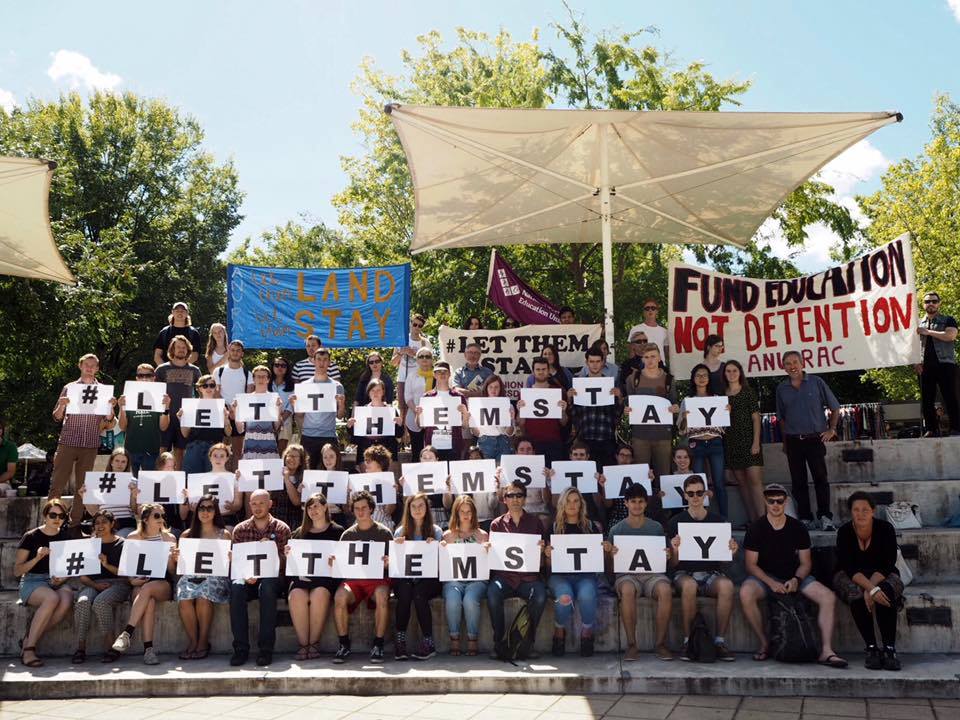 To most ANU students, Dr John Minns is better known for his work in the Centre for Latin American Studies and the College of Arts and Social Sciences than for his involvement in refugee politics. However, an activist for most of his life, John is currently one of the leaders of the Canberra Refugee Action Committee, a component of an Australia-wide organisation that describes itself as working to raise public awareness about the government’s obligations to give refuge to asylum seekers and treat them with dignity and humanity.

In John’s own words, RAC ‘is really a multi-faceted campaign.’ Its primary strength lies in its use of working groups, constituencies within the Canberra community based around similarities and interests, such as Unionists for Refugees or even the Australian National University RAC. For John, organising in this way ‘means you can do some things in the campaign, but you don’t have to do them all.’ Additionally, ‘people are more easily able to relate to and talk to their own constituency.’ John uses the example of the Faith-based working group, which uses parables and Christianity to start conversations about refugees, which John, an atheist, wouldn’t otherwise use.

While we talk about the RAC and the different campaigns John has involved himself in, I’m struck by his focus on the activists themselves. In our conversation, John only briefly mentions the demonstrations he has been a part of, and other aspects of the RAC campaign, but discusses at length the importance of getting more and more people involved.

‘By creating more activists you get a bigger campaign, with more momentum, and then you can put more pressure on the government or at least on one side. You can’t have a strategy to change the government’s mind without the troops. People talk about strategy all the time, but they have nothing to implement the strategy with.’

‘What we are doing in the campaign is trying to get activists who can win over the next lot of people. Activists who are successful are activists that are firm and active on the issue, and live next door to people that can be won over, or are members of their family, or part of their churches, or even their classmates.’

This talk of building campaigns by building numbers is particularly interesting in the university context. It’s no secret that university students have historically had a reputation for being politically active. John himself began his career as an activist as a student in the 1970s Queensland Bjelke-Petersen era, when street marches were banned and John, along with 2000 others, were arrested for protest marching against the ban. But this momentum seems to drop off with graduation, and many organisations struggle to retain activists in the long term. According to John, this is explained by the fact that ‘any social movement, any campaign, has a social turnover. It’s not like having a job.’

Again, he comes back to the importance of recruitment in activism. ‘You need people coming in the front door because it is inevitable given the nature of life that people will be moving out the back door. You can’t expect people to maintain the same level of activism throughout their whole life, in a way you have to accept that there is no magic that is going to keep people in activism forever.’

But John follows this up by emphasising the ‘little bit of magic you can use; you can keep activism not only relevant and useful but also interesting.’ He uses a metaphor of oxygen masks on planes to explain his point, ‘you need to look after the wellbeing of activists before you can recruit anybody else. If people are going to the same things over and over again it’s not that they get physically tired of doing it, but they sense a certain futility with it.’

I ask John what he thinks is the biggest obstacle to activism in general. Part of me expects him to talk about time constraints or a lack of interest. But he doesn’t miss a beat.

‘I think the biggest obstacle is disillusionment with the political system to the extent that people think that they can’t change it. That you can’t really effect any change because nothing you do will make any difference. But that’s a broader and justified disillusionment with what you might call democracy.’

But, perhaps surprisingly, this doesn’t mean that John is pessimistic about affecting change. For him, ‘the answer is that what people are seeing as politics is the formal system. Seismic shifts in society do not usually begin there. They might be completed there, but they usually start with people who are talking about what they can do to get an activist campaign going. If you go back to the end of slavery, or votes for women, or labour rights, or gay law reform, or anything like that, I can guarantee you that not a single one of them began in a chamber of parliament. But that doesn’t mean they didn’t eventually happen.’

‘Instead of looking at what hasn’t changed, look at what has, and how.’

On that note, I ask John what advice he would give to young people looking to get involved in activism. With a laugh, he immediately talks about getting involved with RAC, and you can see how passionate he is about his work. More seriously, he adds that from his experience, what is most important is to get a structure. Referencing his international relations roots, he quotes, ‘the amateurs talk about strategy, the professionals talk logistics.’ For John, ‘doing politics like this isn’t about moving pieces around on a chessboard and thinking about clever ways you can talk to a parliamentarian to get them to change their minds. It’s about having thousands of people out on the street. And some money to do things with. Prozaac things like having people to do things with, who have skills and who have time.’

Some answers are edited for clarity.

The Complex Nature of Conformity

My Assimilation into Australia