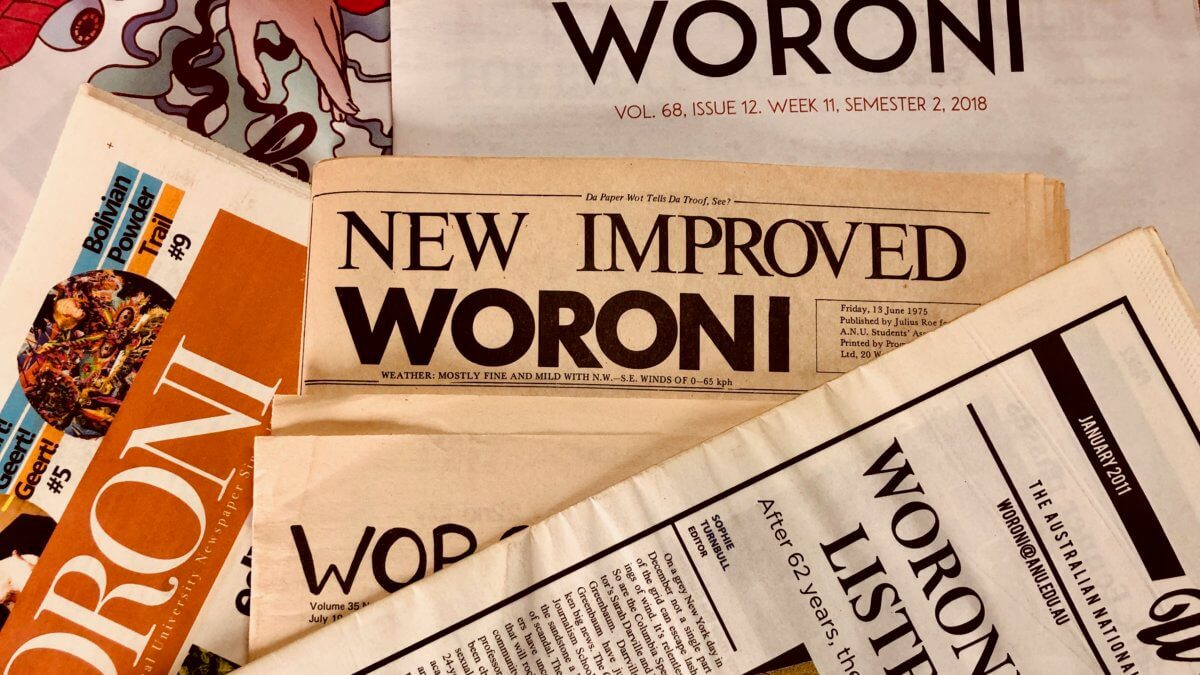 Woroni has a proud history of being the ANU’s student media outlet since 1950. This organisation, now in its late sixties, has constantly succeeded in its goal of promoting open public dialogue and debate in the university community. We produce interesting, entertaining, informative, recognised and regular content, as per the goals enshrined in the association’s constitution. The diversity of opinions, stories and authors published within the pages of the paper has grown and changed to reflect that of the student body and the changing times and makeup of Australia. Social values, accepted norms and cultural understandings have moved forward in over half a century and likewise Woroni today is not what it was, it is a product of its time to be viewed as context for the fabric of student society. But we cannot stagnate and hold on to tradition for the sake of tradition alone, nor is the continuing development a bad thing. And so, we are moving forward, but don’t fear ANU Students – we’ll still be your Woroni who you know and love. So we’re moving! Not just to a new office; at the beginning of next year our print publication will become a monthly magazine. All of the things you love about the content we produce, the art we showcase and the stories we share will be the same, they will just be printed on different paper. We will still work to discover and develop the creative talents of students at the University in journalism and the media arts, even without a dedicated degree in journalism at the ANU. We will still provide events, professional development and a platform for your voices, we are just going to be doing it better. We’ll have more time to work with you on your pieces, more ability to showcase your art, news delivered to you faster, and more capacity to support you when you work with the organisation.

And Woroni remains a growing organisation. With the addition of Woroni Radio in 2012, and Woroni TV in 2017 ANU Student Media remains the only successful multi-platform, independent student media organisation in Australia. Woroni maintains a team of 70 regularly engaged volunteers across our platforms, nearly 100 radio presenters and literally thousands of contributors to the paper.

The newspaper has been the cornerstone of the organisation since its inception, and an icon for many generations of ANU students. Nonetheless, the media landscape is now changing and evolving to reflect the interests of the community and adapt to new ways in which people interact with news and media. Across the country, newspapers have edited their production processes and formats to respond to these changes. Student publications too have responded by transforming their printed format from the tabloid newspapers to producing magazines and emphasising creative content, leaving Woroni as one of the last student newspapers in Australia. We should take pride in what the newspaper has achieved and how far it has come. We should take pride as ANU students that our student media organisation has for almost 70 years reported on, and held accountable the university, the government, and student groups for their actions. News reporting is an integral part of what we do, and it’s not going away any time soon. But to continue bringing you effective reporting, we need to ensure our news is timely. To this end, we are going to enhance our news platform by focussing on online news.

Give Me Liberty or Give Me Death

Woroni is more than just a news-paper or the content that is created, it documents the evolution of the Australian National University from its inception in the early 1950s to the leading university in Australia and ranked in the top 20 in the World. The oldest Woroni in the Trove online at the National Library of Australia is from June 14, 1950, only six pages long, and under the masthead, “Journal of the Canberra University College Students Club.” By 1961 under a new masthead reads “The newspaper of the ANU Students Association,” and thus Woroni was incorporated into ANUSA until 2011 when it became fully independent. Independence has been a process of figuring out where Woroni’s place is as the student newspaper, how we engage with students and has resulted in the multimedia platform we have today.

With growth and change comes challenges, and structures and practices must be revisited. Woroni has gone from an eight-page paper disseminated before the internet, to a major fortnightly publication focussed on amplifying student voices. We are going to create timeless publications, with greater relevance for longer. Which won’t yellow and age in only a year. Which won’t be known for the events of the time, but instead will give a snapshot of the student body’s thoughts, values and challenges being faced. We won’t shy away from controversy. We won’t hesitate to draw the line. And we won’t be going away any time soon. But we will be moving with the times. And we will still at our heart be Australian National University Student Media.

I’ll end by giving thanks to the thousands of writers, editors, artists, designers, contributors and, most importantly, students who have been part of the creation of hundreds of newspapers over the years. We commit to continuing the legacy of print as we move into the next chapter of Woroni’s history.