News is constantly flooding in about the latest medical and technology breakthroughs, and it is easy to get lost amidst all the noise. However, one advancement has risen above the rest and in 2017, CRISPR took centre stage in the technological revolution.

CRISPR has garnered a great deal of attention in the media, but why are we so interested?

I am glad you asked!

CRISPR (pronounced ‘crisper’) stands for Clustered Regularly Interspaced Short Palindromic Repeat… and that is why we use the acronym!

It is a simple and incredibly effective way to edit sections of DNA (the building blocks of life) by either adding, removing or altering the DNA sequence.  Where CRISPR excels compared to other similar techniques is its way of targeting specific regions in the DNA sequence, which you want to manipulate. Instead of wishing for the right outcome, we can control it!

CRISPR achieves this accuracy by consisting of two key elements: an enzyme that causes a cut on both strands of DNA, and a guide that allows it to target specific sections of the genome.

Most DNA is double stranded, and CRISPR makes sure that both DNA strands are accurately edited. We can also ensure that every time it is replicated, the new strands will be stably inherited making the edited DNA a long-lasting change to the organism’s genetic makeup. Not only that, but one of the most exciting features of technology is the ability to create gene-drives out of CRISPR. This means that every mutation we create has a biased inheritance. Instead of having approximately a 50 per cent chance of inheriting a certain mutation, it now has close to a 100 per cent inheritance rate. This is called gene-drive inheritance, and this feature is going to revolutionise the way we tackle problems. It’s super effective!

Because of the immense capabilities of this technology, the possibilities are limitless.

Why this technology is important

With our increasing population, our current lifestyle is not sustainable. Food will become scarce, medical resources finite, and pure water sources less and less attainable. Diseases will evolve as quickly as our means of treating them. This is where gene-editing and CRISPR can play a major role in curbing nasty side-effects of a booming population.

CRISPR allows for the alteration of the genetics of crops such that they can grow under harsher conditions and with fewer resources needed to keep the plants alive. Scientists could also pack the plants with nutrients or change their growth behaviour so that they could potentially grow larger, faster and all year round.

Mosquito-borne diseases, such as malaria, cause millions of preventable deaths worldwide each year. CRISPR could potentially save millions each year by altering the DNA of the mosquito to make the mosquito unable to carry the parasites, viruses or bacteria, which cause disease. Research into this is already well underway and has had promising results so far.

Most importantly, because of CRISPR’s accuracy and effectiveness, human gene editing (also known as human gene therapy) is no longer in the realm of science fiction but is poised to be the next medical breakthrough of this century.

Imagine a world where cancer could be cured by a simple procedure without the need for chemotherapy. A world where infections could no longer take hold, where inheritable diseases such as diabetes could be prevented and where disabilities such as blindness were unheard of. This and much more is increasingly possible, all because of CRISPR.

But why stop there? Humans always want to improve themselves. Gene-editing may one day be used as a tool to allow people to enhance themselves, whether it be to increase athletic ability, intellectual capability or cosmetically (changing eye colour, for example). It is an exciting time to be alive!

However, with these immense capabilities come ethical concerns.

Human gene therapy hasn’t always been this promising. It has a shady past.

The first volunteer human experiments took place in the mid to late 20th century. Public fears of the risks posed by this new therapy were high, and for good reason. A mixture of ambition, shortcuts, blind faith and little supporting science meant that the first 40 years from its inception in 1960 were unsuccessful and, arguably, morally dubious.

This culminated in the preventable death of Jesse Gelsinger in 1999, an 18 year old with a metabolism deficiency, which was kept in check by a modified diet and enzyme supplements. As part of a human gene therapy trial, viral vectors were used to insert a new DNA sequence in an attempt to cure his metabolism deficiency. This caused multiple organ failures and his eventual death four days after he participated in the trial, sparking outrage in the public and scientific community.

Gelsinger’s case was the first where a death could be directly linked to gene therapy treatment. As a consequence, and with further investigation by the United States Food and Drug Administration, the researchers were found guilty of misconduct. Gelsinger was not properly informed of the risks imposed by this procedure: under similar treatment, laboratory monkeys had died and fellow patients had suffered from serious side effects.

For a time after, human gene therapy took a backseat.

Nowadays, human gene therapy is tightly regulated and in Australia and the gene-editing of embryos is forbidden. This is due to ethical concerns based on religious and moral standings. Many people still feel uncomfortable about the thought of ‘designer babies’ and consent of the procedure. Yet despite all its history, the public seem cautiously optimistic about its potential.

People should have their say

CRISPR has the power to revolutionise the medical industry. But with great power comes great responsibility. People must be fully informed and allowed to have their say as to what the future may hold for this research. Key ethical questions must be answered and integrated into policy and regulation to ensure that CRISPR and human gene therapy doesn’t revert to its unscrupulous past.

Is the ability to enhance ones intellect or strength a personal choice? Or one that should be decided by all? What if some couldn’t afford to use this technology and only the rich had access to it? More importantly: if we enhance ourselves, do we become less human? Is that a good thing? Can we reverse it? Humans are always evolving, but is it wise to meddle with nature?

These and many more questions are raised by the prospects provided by CRISPR. It is now, as we stand on the precipice of a new era that we must decide, as a nation, on the extent of our willingness to use human gene therapy. We do not want to find ourselves in a position like Dr Ian Malcom from Jurassic Park: 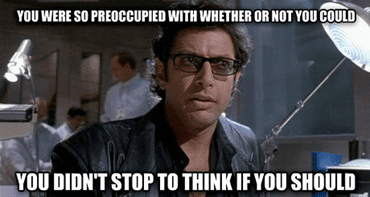 The Centre for the Public Awareness of Science at the ANU is conducting a survey to figure out where Australians will ethically draw the line between human gene editing as a way to cure disease or to enhance our abilities or appearance. Have your say! Click or type in the URL to let us know what you think human gene-editing: https://www.surveymonkey.com/r/STFS9K7