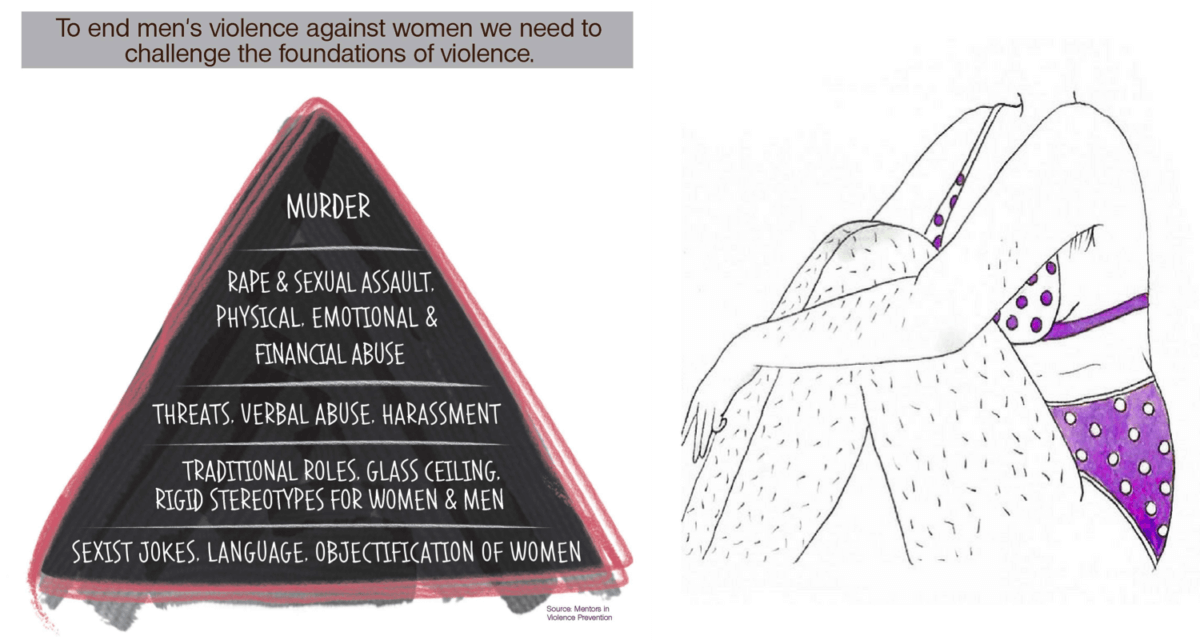 What’s Hair Got To Do With It?

Throughout the month of February, women across the country will be growing out their body hair to raise money for domestic violence services. But what does body hair have to do with violence against women?

Violence against women can be visualised as a triangle. The most serious forms of violence (sexual assault, rape, and murder) are at the top. These are supported by harassment, threats and emotional abuse, which in turn are normalised by the objectification of women, sexist jokes, derogatory language and rigid gender roles. Policing of women’s bodies and denial of women’s bodily autonomy are crucial to the continuance of acute violence against women. Body hair may seem like a small issue, but it is important because it is a visual marker of women’s inequality. Through the policing of women’s body hair, we can see the double standard women are held to by society.

If a man does not shave, it is considered perfectly normal; he is not harangued in the street by strangers demanding to know why he has body hair. He does not receive verbal abuse for choosing to leave his natural body hair intact. This is the reality for women who do not conform to the expectation of female hairlessness. Women with body hair experience verbal abuse, scrutiny and isolation. Our society is uncomfortable with a visual manifestation of a woman’s autonomy.

Both men and women grow hair as a natural part of our bodily functioning. It wasn’t until 1915 that women’s hair removal products emerged. Until then, women’s body hair was seen as perfectly normal. The market for women’s hair removal products emerged as the major hair removal product companies of the day wanted to increase their business and profits. A targeted advertising campaign described women’s body hair as ‘unnatural’, ‘unclean’, and ‘unsightly’. Within 10 years, the number of women removing their body hair increased by 16 per cent. Today, over 97 per cent of women in Australia remove their leg and underarm hair. Women who dislike body hair are more likely to feel disgusted by their own body. This is reinforced by societal perceptions – women with body hair are described as less intelligent, more aggressive, and less friendly than women without body hair. There is big money to be made by the beauty industry in enforcing the norm of female hairlessness. The worldwide hair removal industry is worth over $882 million and is expected to grow to $1.35 billion by the end of 2022. The role of capitalism in policing women’s bodies, and reinforcing stringent and unequal gender roles, is evident.

When the policing of women’s bodies is normalised and ingrained in society, it naturalises men’s objectification and control over women and allows violence against women to flourish. In Australia, one in three women experience gendered violence in their lifetimes, and one woman dies every week because of gendered violence. Women are more likely to be killed by their own partner in their own home than in any other place by anyone else. Every year, between 80 and 100 women die at the hands of their male partners. In 2016, 73 women died in Australia at the hands of an intimate partner. This is more deaths than terrorism has claimed in Australia in the last several decades combined and yet government spending on terrorism prevention continues to increase, while funding for domestic violence services is repeatedly cut.

Part of drawing attention to the huge and unacceptable rates of violence against women is making inequality visible. Hair is a powerful way to challenge the normalised double standards imposed on women and draw attention to the oppression we face every day. Growing out your natural body hair can be a challenging experience, because it can feel scary to break away from what we are socially conditioned to accept as normal. But it can also be a liberating and freeing experience. To experience your body in its full and natural state is an exercise in self-love. And in a world that profits from our insecurities, learning to love yourself is a radical act of resistance.

Feminist advocacy of the 1970s-80s focused on trying to achieve equality for women through ensuring that legislation didn’t contain explicitly sexist provisions and enshrined equal pay for equal work. The hope was that by ensuring procedural equality, substantive equality must naturally follow. Looking at the statistics of violence against women today, this has sadly not succeeded. This is why we must deconstruct every foundational norm, including female hairlessness, that entrenches societal inequality to end violence against women. This is one small step, but it is something you can actively do to help change our society for the better.

If you have experienced sexual or domestic violence, or found anything in this article triggering, you can contact 1800 RESPECT or the Canberra Rape Crisis Centre on 6247 2525.