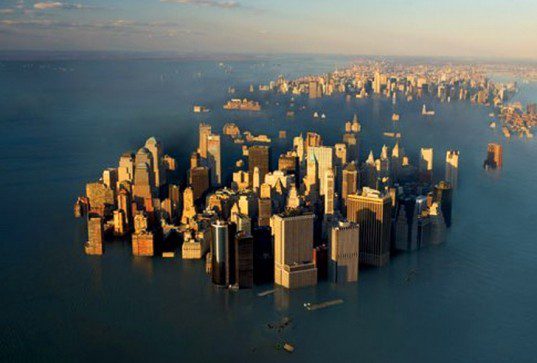 If the Greenland and Antarctic ice sheets were to both completely melt, the water input into the oceans would result in about 66 meters of sea level rise. This sea level rise would drown coastal cities, destroy fertile land, contaminate fresh water supplies and render electricity networks inoperable. How do we track these sea level changes? We use some satellites known as GRACE.

You may have read or heard about the trillion-tonne iceberg that broke off the Larson C ice-shelf on the east coast of the Antarctic peninsula in early July. Some reports even mention that this huge event would have an impact on sea level, causing it to rise. When reading this news, it is easy to get the impression that all Antarctic ice will affect sea levels.

However, the reality is that these types of events will not directly cause sea level to rise. According to the Australian Antarctic Division, it will be years before we feel the effects (if any) of this event.

To understand why, it is important to make a distinction between land-ice and sea-ice and how one contributes to sea level rise while the other one remains negligible. Think of a glass of water with ice in it: as the ice melts, the water level does not rise because nothing is being added or removed. Ice is simply melting to liquid water. However, if you were to add extra ice to the glass, the water level would increase. The same principle applies to ice and our oceans.

Land-ice comprises ice sheets and glaciers that are on land and not directly in contact with the ocean. It is this ice that contributes to sea level rise – the stuff yet to be added to the oceans. Ice-shelves, on the other hand, float on the ocean and act as a kind of cork for glaciers flowing into the sea, therefore slowing their flow down. Ice-shelves follow Archimedes’ principle, and like the glass of water example, this ice is already contributing to sea level. Simply breaking off a piece of an ice-shelf to form an iceberg will therefore not result in a change in sea level.

Antarctica has lost almost 2,000 gigatonnes of land-ice since 2002, while Greenland has lost more than 4,000 gigatonnes. Land-ice situated on Antarctica and Greenland is constantly being melted at alarming rates according to NASA. Though the thermal expansion of the oceans and the changing salinity are other contributors to sea level rise, melting land-ice remains a major component. In the last 20 years alone, the global oceans have risen by more than two inches. This may seem insignificant, but the rate of the rise is roughly twice that of the preceding 80 years.

But how do scientists determine these numbers? They get help from a pair of satellites, known affectionally as GRACE (Gravity Recovery and Climate Experiment).

GRACE consists of two identical spacecraft which fly about 220 km apart from each other in orbit about 400 km from Earth. The GRACE mission had its launch in 2002, with the purpose of mapping the Earth’s gravity field. By observing changes in Earth’s gravity field, scientists can gather data about how and where mass is flowing on Earth. GRACE can track the transport of water on Earth in rivers, lakes, glaciers, ice-sheets and also soil moisture. Importantly, GRACE provides data on the exchange between ice sheets and the oceans – that which affects sea level rise.

Dr Paul Tregoning is a lecturer and researcher at the Research School of Earth Sciences at the ANU. He and his team have helped develop software to generate new estimates of mass redistribution using data from GRACE. By redistributing the mass, we can make inferences about how much land-ice may be contributing to sea level.

‘GRACE provides a measure of changes in total water storage, and there is no other mission that is able to provide that information. It’s a revolutionary observation of the Earth system.’

GRACE was indeed a revolutionary mission: aside from sea level rise, it helped scientists show that the oceans were warming, whereas previous data suggested they were cooling. GRACE was still acquiring quality data in 2017 for which Dr Tregoning remarked was ‘not bad for a five-year mission’, highlighting its longevity and value.

A GRACE follow-on mission is set to be launched at the end of the year which will enable even more precise data collection into the future. You can head to https://gracefo.jpl.nasa.gov/ to see the countdown to the launch of this next mission!

Scientists are still trying to identify the causes of melting ice sheets, but it is clear that GRACE provides invaluable data on the contribution of melting land-ice to sea level rise. It is imperative that we understand the Earth system so that we can make positive changes and resolve our global issues. GRACE is just one of many NASA earth observation missions which is helping scientists to understand better the dynamics of Earth, and the ANU is one of the institutions at the forefront of this research. Through this work, we are better able to understand what happened to the Larson-C ice-shelf and how sea level may change in the future.