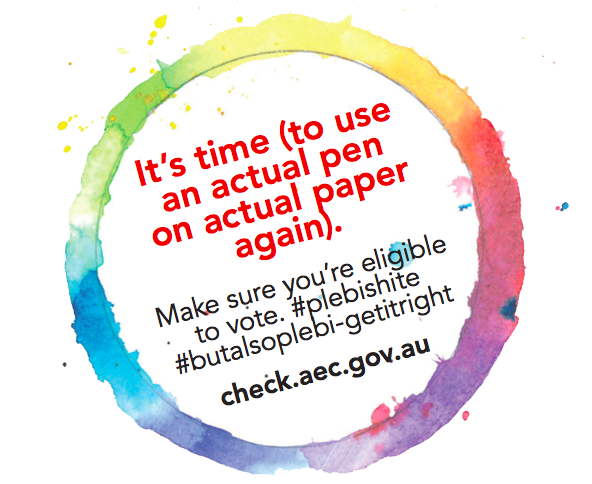 The Postal Survey: An Unideal Path to Marriage Equality

When I was 16 years of age, I wrote a letter to my local federal MP, a coalition minister. It was a rather emotional appeal to the conservative for changes to the government’s position on marriage equality. At the time, I was closeted and extremely anxious that this letter could somehow expose my sexuality to my family and friends when I wasn’t ready for it. But I sent the letter anyway, sharing with this influential figure a testimony about my situation and precisely what the practical and symbolic importance of marriage equality was (and still is) to me. A few weeks later I received a reply in the post. Rather than responding to my heartfelt story with support, they did so with rudeness. The person whose job it is to listen and represent instead chose to disregard the story of a closeted 16-year-old – crushing my spirit in the process.

This was undoubtedly a product of intolerance, party politics and homophobia – the stains of which remain in the fabric of the Coalition. Indeed, the postal survey represents the hostility and little regard the government holds towards the LGBTQIA* community; it not only provides a platform to be bigoted, but it places an already vulnerable group in a position where their mental health will be at risk.

The manner in which marriage equality is being dealt with is disappointing, to put it mildly. Nothing breaks my heart more than to think of the thousands of kids around the country who are watching this debate unfold, the occurrence of which reinforces the idea that queer* people are somehow different. As someone who has been out and active within this community for a while, I will often get messages from people, some of which I’ve never met, reaching out for support as they struggle to come to terms with their sexuality. The challenges that these people face is enormous, and I do fear that these discussions will affect the self-worth of these young LGBTQIA* people.

Given what is unfolding, I think it’s essential to stress what an awkward position this postal plebiscite puts the queer* community in. I was recently speaking to a close friend of mine on the subject when he remarked, ‘You know, at least we finally have a viable avenue to pursue marriage equality – at least, in all likelihood, we’re going to make it happen.’ This is so easy to sympathise with. As one of those tens of thousands of people all over the country who have pushed for marriage equality so hard for too long, at times, it feels hopeless and exhausting. This postal plebiscite is very promising in its likely outcome. Yet, here I make an important distinction: I’m not just some activist pushing an interest for marriage equality. Rather, I am a member of the queer* community and I, instead, care more about the state, morale and well-being of the people within it. Therefore, I can’t be grateful for this postal survey because it’s unarguably destructive for the lives LGBTQIA* Australians.

There can come a point when the avenue to achieve the desired change that you have been fighting for comes at an unfavourable and/or unnecessary cost. In these instances, conviction of principle and care of those you’re fighting for must always take precedence. This is why I am fundamentally opposed to this plebiscite. Unfortunately, our hands could be forced. With some legal advice indicating the legitimacy of the postal survey, it could very well go ahead. In which case, I intend to give the campaign everything I’ve got. While boycotting might seem like a reasonable corollary to my disapproval to the survey, I say this: acknowledge that the postal survey is far from ideal, prioritise looking out for and building up the people around you while working hard to win so that at least there is some return from this nightmare of a plebiscite. So, while we continue to rally against the survey while we can, know that the yes campaign is armed and ready and should the survey be permitted, by hell, we will win it.