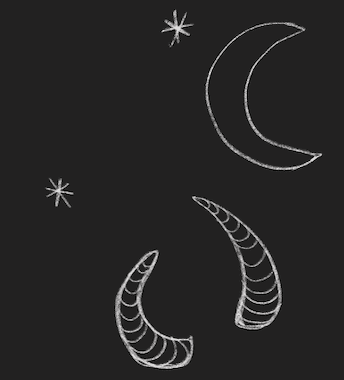 13.8.2020 by A. Banfield-Powell
Artwork: Eliza Williams
Edits by Rachel Chopping

Away from the battle I fled in great haste,

Fearing for my life and the weight of my sin.

The scent of death in my mouth I did taste,

And wonder of the coffin they’d bury me in.

When at once I did notice, my surrounds,

A fearful and decrepit place quite rotten.

A swamp, once a grave yard, peppered with mounds,

Holding the bones of the dead long forgotten.

Behind piled tomb stones I made myself masked,

My pursuers clothed in the pale moon’s light.

Gleefully talking of what had been tasked,

They searched as an owl may search for its prey,

Upon them time seemed not to weigh,

Determined they were to vouchsafe my penance.

When at last my hunters found

My corner of this most ghastly hell,

I shivered in darkness near burial mound,

With a stench of fear they surely did smell.

I closed my eyes and waited still,

To pay my unearthly debt and bill,

The price to be my immortal soul.

But death’s cold touch, I did not embrace,

In this world of gloom and mist I remained.

Huddled in fear in that foul place,

As if to my tomb I were already chained.

When all at once I realised,

A stillness in the cold night air.

As though my chasers were paralysed,

The wolves no longer sought the hare.

They stood stock still and statuesque,

Mannequins in a department store.

Frozen there, they seemed grotesque,

Not an inch they moved, not one, no more.

With them fixed in place, I arose from pray,

Wondering at their current condition.

Forgetting not for a moment they,

Realisation now filled me with dread,

I knew I was no longer alone.

Slowly I turned and looked ahead,

To see him sitting upon tombed stone.

The man near spectral in the mist,

Resting his cheek upon his fist,

With a gaze that did not stir nor falter.

“From where have you come?” he asked me with ease,

Startled as I was at the breaking of this hush.

Thinking what could I say, his question to appease,

And of what did this strange presence discuss.

“I have run from a battle. But, to whom am I speaking?”

I asked in earnest but with fear in my voice.

“I have many names, all of them quite unforgiving,

Mephistopheles, Lucifer, I leave you the choice.”

Could it be that before me stood the father of lies,

The fallen angel cast from heaven, I meet?

The one all religious texts do despise,

Given license to roam with unheavenly feet?

“What do you want?” I asked with composure,

Assuming this, of course, was some kind of a hoax.

“What could Satan gain from this sort of exposure?”

An answer from him I surely would coax.

“Exposure? What tripe!” He said with a smile,

“This sort of thing is merely routine.

You simply haven’t seen me at work for a while,

The job is quite real, just vastly unseen.”

“What do you want of me, evil creature you are?

Although I extend you great thanks for halting my foes,

Why, pray tell, this tremendous seminar?

A well needed holiday from the abyss, I suppose?”

His face became solemn and his eyes grew blood red.

He stood from his spot and put hat into hand.

Revealing curved ram’s horns that grew from his head,

As any shadow of doubt from my mind did disband.

“If you stay your course and do nothing to change,

Your memory will be damned to the dark and decrepit.

This fate awaits all cowards who will not exchange,

Their dishonour in the face of the hell they inherit.”

I now saw the grave upon which he stood,

The tombstone crumbled and decayed by the ages.

Through the tangled weeds and overgrown wood,

I sought the engraving, heedless of dangers.

I scrambled and clawed at the wretched vines,

Great in number and woven so thick.

Why had this grave among so many shrines,

Gone neglected by all in a way so horrific?

There at the last, the name stood revealed,

The greatest shock I ever have witnessed.

The name that was hidden, now unconcealed,

Was none but my own as true meaning surfaced.

“The penance you’ll pay for the way you behave,

The woe of your acts and deeds so unworthy,

Is written as plain as the name on this grave,

If you do nothing to avert such causality.”

These were the words of this agent of fate,

The one who fell from such glory on high.

Seeing to it that I not repeat his mistake,

All regret and compunction I did damnify.

I saw now what this spirit sought to show,

Filled with cowardice and paved with sorrow,

With no direction but further on into darkness.

“From this moment on, my life will be changed,

A coward and deserter no more!” I did cry.

“No regret shall I hold lest I be deranged,

My immortal soul, I will make you deny.”

Again my angel smiled, a smirk of satisfaction,

Replaced his hat and set forth into the mist.

Had he expected from me such violent reaction?

It was now that I woke, on the eve of a storm,

The battle I fled, returned to me anew.

Better to face my demons on fields of red,

Than the mists that from foul cemetery blew.

Gathering sense and with courage new-found,

I go to whatever fate awaits a soul such as I.

Whether toward damnation or restfulness bound,

My mistakes fall to none but me to justify.