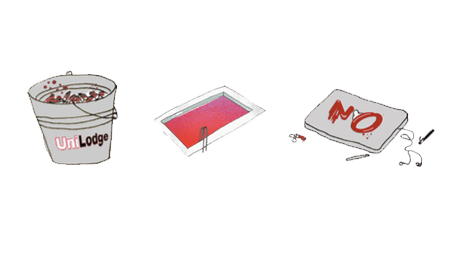 Fun DIY Ways to Dispose of your Used Tampons on Campus

Hey menstruators! Have you recently noticed a certain delightful smell wafting through a number of bathrooms on campus? Do you have a moment of terror every time you force the lid shut on the sanitary waste disposal bin because you half-expect it to explode all over you? Have you started genuinely wondering whether that weird satanic black substance that drips from the door next to the dojo room is actually period blood, which has seeped into the very walls of our campus?

Yes, it seems that menstruators at the ANU, if they are lucky enough to find a bathroom that provides a sanitary waste disposal bins, are being forced to do their business while surrounded by human waste. Even when raised on Schmidtposting back in March did it fail to resolve. That’s right, your university cares less about you than the soulless, unfeeling behemoth that is Boost Juice.

Well, grab your glue gun, friends! Because, unless you’re willing to risk toxic shock syndrome and just let your sanitary aids marinate in your underwear, you’re going to have to get creative. Here are some fun and easy ways to hygienically dispose of your pads and tampons.

Convert them into a trendy new clubbing outfit.

The weather is cooling down. So, you will need some warm, yet fashion-forward, clothes to wear on your nights out in Civic. An outfit constructed entirely from bloody tampons and pads is perfect. It will absorb any drinks you spill on yourself. It will ooze brown goo if some guy gropes you without your consent. It’ll be a staple of your wardrobe in no time.

Dump them on the belongings of those who leave their stuff in Chifley for hours at a time.

There are some interesting categories at the ANU. Some people post links to articles with titles like ‘Genocide: Is it that bad?’ on Schmidtposting during exams. Some people creatively park in the already-full carpark next to the corpse of Bruce Hall, blocking others from leaving in the process. Then, at the bottom of the pile, some people lay claim to desks in Chifley by abandoning some food and a book and then wandering away. Who would protest if these cretins were discouraged from their actions, while menstruators were simultaneously able to enjoy the luxury of a bathroom that isn’t a health hazard?

Collect them all in a bucket and leave it somewhere in at UniLodge.

The university’s service providers don’t care much about basic cleanliness. You know who does? UniLodge. UniLodge cares very, very much. It cares if your carpet is not sufficiently vacuumed. It cares if you forgot to wipe down your microwave. And it is most definitely going to care if inexplicable buckets of used feminine hygiene products start appearing in its common areas as if they are haunted by the ghosts of all the students ruthlessly thrown out in their second year. They’ll have your products disposed of post-haste ­ – even if the cost does come out of the pockets of those poor souls residing there.

Wring them all out into the ANU pool.

Nothing says ‘why are you spending money on a pool when our bathrooms are actual cesspits’ like rendering said pool just as disgusting until the problem can be fixed.

And there you have it! No more watching the bloodied little towers accumulate in the Law Library bathrooms like some sick game of Tampon Jenga. No more attempts to simultaneously hold your breath, take a fifteen second dump and speculate about what would happen if certain other demographics were asked to put up with these conditions. With the help of these useful little life hacks all your worries (and your risk of toxic shock syndrome induced kidney failure) will disappear. Good luck!