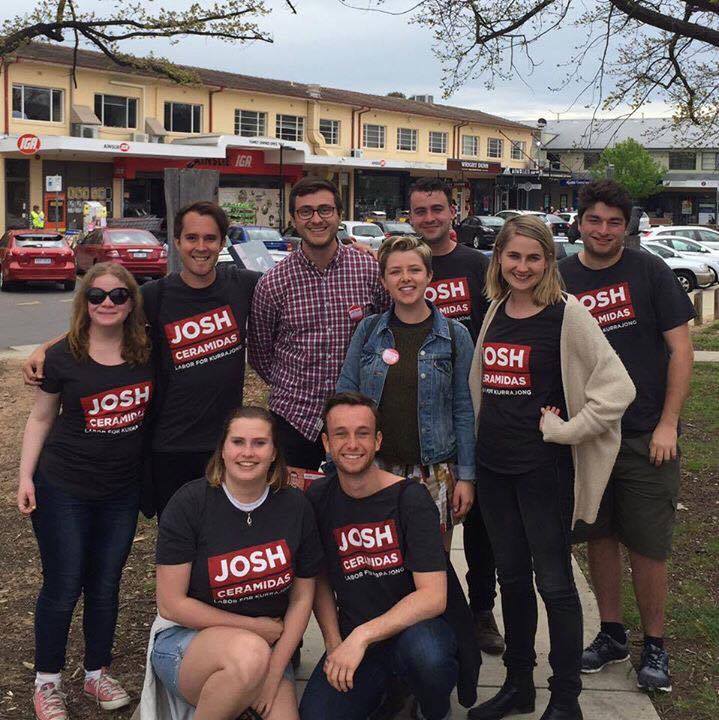 My best friend once told me that I was a shit guy, but good for humanity – I have a big enough ego and a good enough dirty look that I had to agree with her. So, consider this column a space where I can air my grievances, confront cultural cringes and try to tackle issues – all at once. I want to instigate discussion and tear friendships apart. Well, maybe not… but you get the idea. Thanks for joining me.

My skin’s a little burnt. There’s a hole in my boots that goes all the way through to my foot, and I’m even further behind in my Uni work then I was before.

Today, I’ve walked the streets of Canberra for the ACT Labor party candidate, Josh Ceramidas. Josh is an incredible candidate. He was homeless in his twenties, and has since dedicated his life to making housing more accessible, the union movement stronger, and is the fiercest male ally for queers and women I’ve ever met. He is who the ANU community should vote for, and the sort of person I joined the Labor party for.

That being said, Julia Gillard was my main motivation. Watching her Misogyny Speech at age 15 gave me the courage to fight back against the guys who’d make gagging noises when I spoke in class, and called me “fag” in the corridor. It inspired me to call Labor, and it’s the reason I got passionate about politics.

Now, my wallet contains a four-year-old membership card, I’m President of the Labor Left, and I do my best to bring more young people into the movement, so that they can become the sorts of activists we all need.

I am not saying this to for the prestige. In fact, being public about your Labor affiliation at the ANU ensures you the opposite. From my experiences, there is an undercurrent at the ANU, which all too often marginalises students involved with the Labor Party. Irrespective of the cause they are advocating for, or their identities as queer, women, PoC, or students from low SES regional backgrounds – they’re tainted, discredited and de-legitimised because “they’re Labor”.

Indeed, our student association has a reputation for it amongst other universities.

As Gen-Rep I’ve had people say “but you would do that”, discounting the work I’ve done on refugee rights, campus assault policy and NUS. They have suggested it’s part of an agenda, and remained mistrusting of my intentions.

I’ve struggled to reconcile how a woman from a regional and low SES background could be asked, “how many ANU Labor Left and Young Labor meetings have you been to” when applying for a position. I’ve had to console someone who’d been rejected from an ANUSA ticket out of “concern for [their] involvement with Labor.” And I’ve been in meetings where people have been forced to disclose their political affiliation.

Entertain this: a woman is blocked from a ticket for being a woman, or a gay person is forced to disclose their sexuality in a meeting. Of course, we would never stand for that. But the moment they have a Labor membership, it’s free game to name, shame and discount them. This isn’t the experience of everyone, nor is it a culture every ANU student indulges in. It is, however, a practice that rejects people’s experiences and activism because of their political affiliation. It’s stupid at best, and prejudicial at worst.

It’s political discrimination feigning as “independence”, and is something ANU students should object to.

This is not to say that some ‘Labor kids’ on campus haven’t done shit things, or behaved inappropriately. They have. But that’s not because they’re Labor or because of a culture within the party. It’s because there will always be shit people.

We need to look past the colour of one and other’s tee-shirts and recognise that the student movement is strongest when it is pluralistic. Moreover, our causes and our associations are bigger than each and every one of us.

Political discrimination is discrimination, irrespective of your politics. We’re so much better than that. So, if anybody thinks they’re entitled to lock people out of it, expect to have that called out for what it is: sheer and utter arrogance.