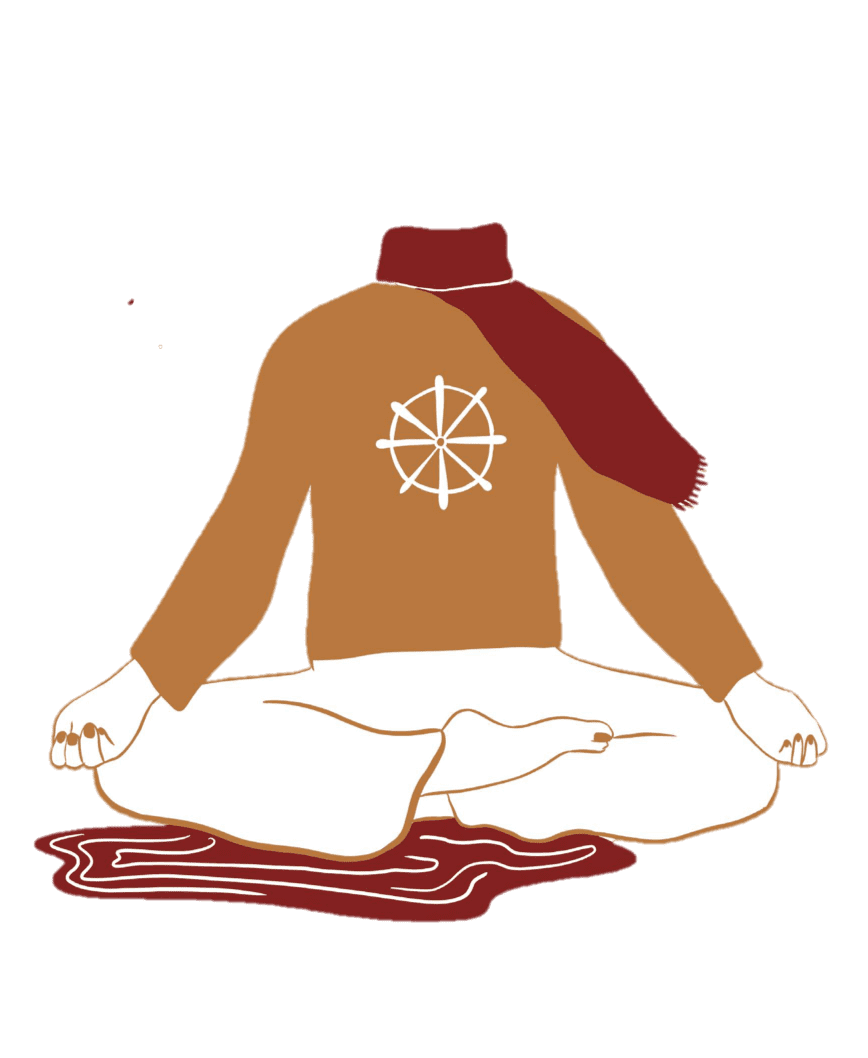 After a grueling semester in which I was confronted by a ton of assessments, the Silent Winter Retreat was very timely. I had made the very last-minute decision to sign up. It turned out to be a decision I will always be grateful for. Held two weeks after the close of the first semester, the retreat allowed me to step back and reflect on my academic achievements, as well as channel some focus to my spiritual well-being. Those of us who attended turned to silence after the noise of academic demands, and were able to reset our minds in preparation for the coming semester.

A calm, resounding silence welcomed us upon arrival. Sunnataram Forest Monastery is a fair trek from the nearest town, and thus remains untouched by the city’s light pollution. The grounds were beautiful, and at night we were treated to a clear view of the Milky Way dust clouds. During our first night, all were gathered in the temple where the chants and meditation were to be done. We were briefed on etiquette, such as the proper way of bowing and sitting towards the Triple Gems of Buddhism – the Buddha (teacher), the Dhamma (teachings), and the Sangha (disciples). Bowing three times to the Triple Gems is similar to the Catholic practice of doing the sign of the cross at the beginning of every prayer as a sign of respect to, and invocation of, the Holy Trinity.

Joining this winter retreat, which was co-hosted by the ANU Buddhist Association, forced me out of my comfort zone. Born and raised as a Catholic, I was hesitant to bow at first, wondering if it might conflict with my religious views. Nonetheless, I was there to learn and had to pay my respects using their customary terms. I came to realise that many of the values which are central to Christianity, such as love and compassion, are also fundamental in Buddhism. This is made extremely apparent in The Book of Joy, co-authored by the Dalai Lama and Archbishop Desmond Tutu, which beautifully blends the values of Buddhism and Catholicism. In the book, the Dalai Lama highlights Buddhist values of compassion and sympathetic joy. These values turned out to comprise some of the principle teachings of the retreat.

Mindfulness was the core of the retreat. Phra Mana Viriyarampo, the Abbot of the Sunnataram Forest Monastery, taught us to be mindful in everything we do. This meant being conscious of simply when we breathe, to how we eat, walk, talk, feel, and think. Mindfulness takes us to the present moment, and frees us from worry about past and future events. What is important is the present – we appreciate its beauty and focus on making the most of each moment. Phra Mana trained us with breathing meditation using loving-kindness. This entails visualising yourself as the giver or receiver of unconditional love, especially to or from those who are dear to us. This kind of meditation not only relaxes the mind, but also aids in maintaining consistency of breathing. He emphasised that breath is used as an anchor to the present moment, and provides freedom from negative thoughts. For a beginner like me, meditation was not an easy task.

We went on to learn insight meditation, in which we reflected on our feelings and were taught of their impermanence. We lack a permanent identity, and thus we should not attach ourselves too much to physical or mental entities. We were taught that an ability to detach will allow one to greatly avoid suffering. I found it interesting that attachment to what makes us happy is more problematic than attachment to that which does not. When we believe something makes us happy (people, power, money, material things, etc.), we often sacrifice in the present to attain it. This can include paying a price with our own values, which creates suffering both to ourselves and to others. To end suffering before it starts, it is then our duty to lessen our attachment by reminding ourselves that everything is ephemeral.

The entire retreat was a way to reflect and learn more about myself. It also allowed me to better understand the teachings of Buddhism through my own experience. Despite having entirely different origins from that of the Catholic faith, I can say that Buddhism shares many identical moral and ethical values. Personally, I feel that the Buddhist practices I learned on the retreat complement my Christian foundations by providing tools for self-reflection, meditation, and mindfulness. It was a powerful mental and spiritual preparation for the new academic term. The challenge for us now is to continue applying these every day. When we do, we will achieve greater perspective, self-awareness and presence, all of which will enrich our lives and make us more compassionate beings.

I would like to end by sharing with you a verse I learned from the retreat, from the Radiation of Loving-Kindness (Mettā Gāthā) :

May all beings be well, happy and peaceful, free from enmity and suffering.

Whatever merits we have done, may these merits be shared by all.

[Sādhu means ‘all is well’ in Pāli, and can be likened to the Christian ‘Amen’.]