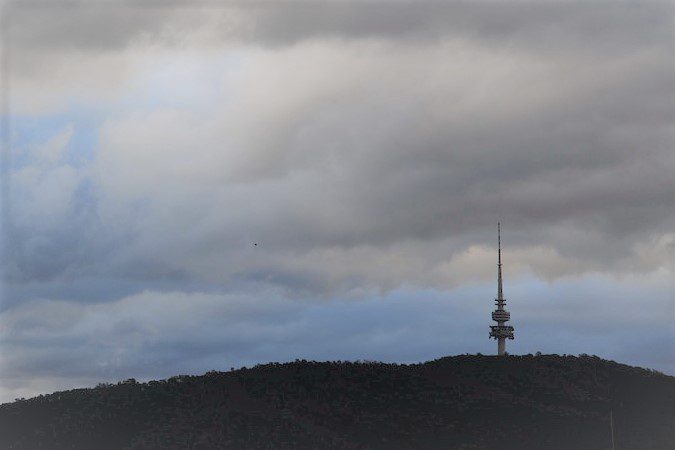 By now we can only hope that Barnaby Joyce has slipped off into what passes here for ancient political history: a couple of weeks ago.

Despite having a reputation which some might say is more tarnished than your grandparent’s silver, that hasn’t been used since their wedding day in 1956, Joyce didn’t rule out a return to the front bench or the leadership.

And of course he wouldn’t. Politics is a strange place. Anything could happen, even when it probably won’t.

Speaking after a game of political football (no, really – the politicians do actually get together to play touch football at Parliament House), Joyce told the conveniently assembled televisual journalists: “I don’t expect to return, but I will always do the very best job I possibly can in any role given to me.”

Would he be like Tony Abbott? The man whose famous statement after losing the prime ministership that there would be “no wrecking, no undermining, no sniping” was clearly meant to be taken sarcastically. No, he said. “I will be Barnaby,” he said.

Conservatives in Australia are often accused of wanting to return to the 1950s. As prime minister, Paul Keating got stuck into John Howard across the despatch box: “[Howard said the 1950s were] a very, very good period, a golden age. That was the period when gross domestic product per head was half what it is now; when commodities occupied 85 percent of our exports; when …” You get the idea.

Ream after ream has been dedicated to whether The Daily Telegraph should have splashed their front page with a photo of Vikki Campion, Joyce’s former media advisor and the woman with whom he is now expecting a child.

The answer is clearly no.

Should Barnaby Joyce’s affair have been exposed earlier? “Oh, I don’t know anything about that, Sir,” the schoolboys all lining up to participate in the cathartic act of denial would say. I’d heard about it though, and you have to wonder if the political columnist at Woroni is aware, who else might be…

Hypocrisy is a quick way to wreck your own political fortunes in Australia. Joyce, the country conservative sticking up for family values while leaving his wife of two decades and his four daughters for his younger media advisors, had clearly trodden the path. We cringed as we looked on.

However, in the old days of parliamentary Canberra (as much steeped in mythology as misogyny), this would never have got out. It was all hush hush, for those blokes parked out in that Parliament sheep paddock, a town of only 6,000 fellow Canberrans nearby.

Now, a media advisor can find themselves in hot water for sending out a meme that showed a picture of Joyce and Abbott sitting next to each other in Parliament with the caption, “When you get in trouble in class and get sat next to the weird kid no one likes.”

With more witnesses, participants and technological intervention comes more a sophisticated rumour mill and greater scrutiny. The standards the voting public demand may or may not be any higher than they ever were, but it’s much clearer now when they aren’t being met.

You can see why Barnaby, from his back bench vantage, might be irritated with the modern world. The new Nationals leader and deputy prime minister, Michael McCormack, is probably quite happy with the arrangement: more opportunities to claim travel allowances to his wife’s property in Kingston.

Once upon a time, Malcolm Turnbull was incredibly popular. Now, in his diminished state, he’s left make sure the government doesn’t look like a total disaster. “Yeah, but he’s better than Tony Abbott,” is, in many cases, the foundation of his political support.

With a trip to the US planned while Joyce was scheduled to take personal leave, Turnbull left the finance minister, Mathias Cormann, in charge. He was fourth in line.

And with Turnbull out of the country, the man who is touted as the next Liberal prime minister, Peter Dutton, took to some pontification at the National Press Club.

“In my view, there is a place for the pledge in a broader rejuvenated civics effort with school-aged children, regardless of their background,” he said, noting that new citizens already pledge allegiance to Australian laws, liberties, rights and the nation itself.

A textbook example in how to make a headline. “Home Affairs Minister Peter Dutton calls for US-style pledge of allegiance for Australian school children,” said The West Australian. Well not quite, but close enough.

And then acting prime minister Cormann backed it. “I think it’s quite important for all Australians to be aware and conscious of our history, our culture and values,” he said. Never mind we constantly struggle to have any productive conversation about that history, culture or values.

Australians, on the whole, don’t like to make a song and dance about their national pride (if they have any), so this sort of stuff will often sound a bit naff. But for Dutton, a person for whom the leadership speculation must have gone to his head, it’s a clear signal of the sort of Australia he’d lead. And the kind of campaign he’d run. And that he’s prepared to do it.

His approach to immigration is hard line and cruel, Australians will be patriotic – or else, and he’ll be tough and will revel in the opportunity to demonstrate it.

Which is exactly the kind of political leadership that the world is overloaded with. Toughness in spades, thoughtfulness in limited quantities.

When’s Turnbull’s downfall? Does Bill Shorten actually play any part in it? Will Peter Dutton be PM?

But for now, teetering on the edge, Turnbull holds on. Still the best option in the eyes of his party – and never mind the voters who haven’t had a chance to have a say yet.

No wonder Turnbull looks pleased to be putting his thumb up next to Donald Trump’s, which he did when he visited Washington last week. He’s still in the game, even if it has us cringing culturally on the world stage.