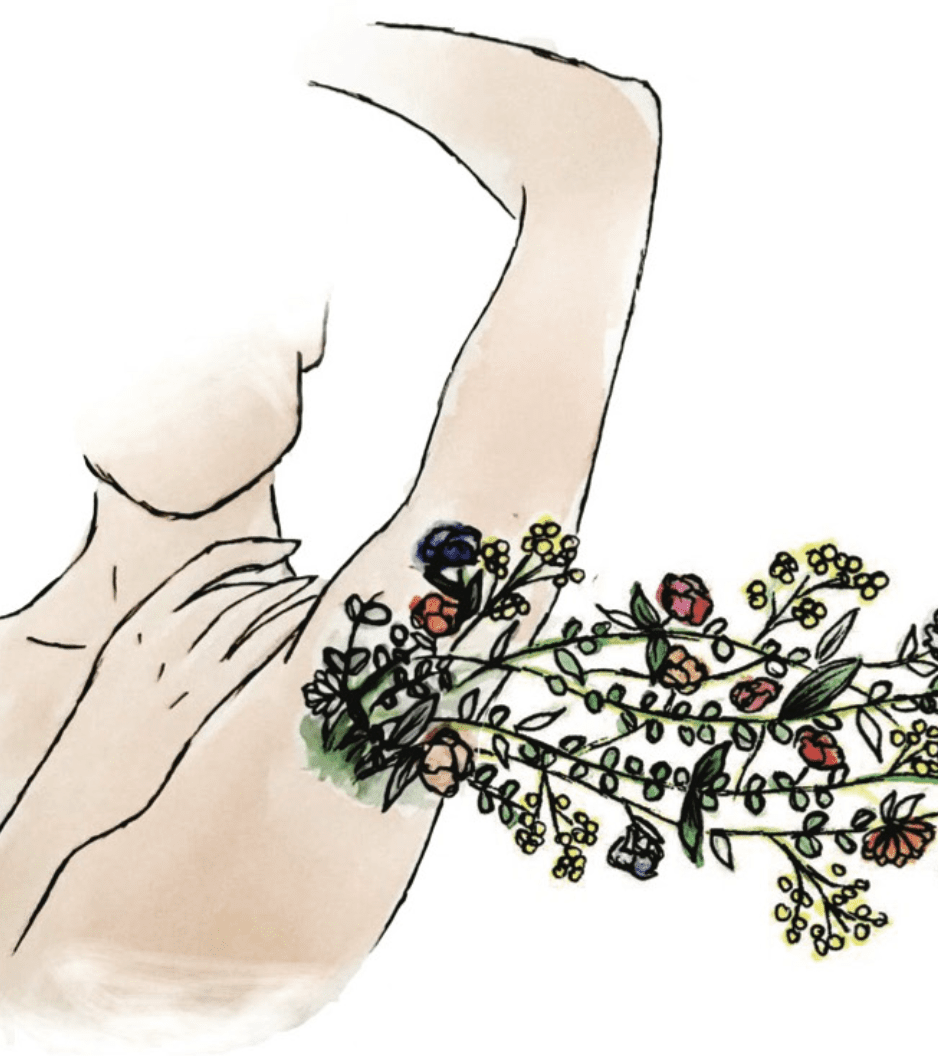 My attitude, however, was this: I gave them full under- standing and support, but when it comes to myself, there’s no way I’m doing it.

Due to my principle of ‘peaceful coexistence’, we lived in harmony with each other all winter. Then, summer came and I appeared in front of them in sun- dresses. The armpit hair I kept was exposed, wittingly or unwittingly, to my mum, which ultimately irritated her.

“As a girl, your underarm hair is so unsightly and dis- graceful. Let’s get it done by the laser removal.”

“I don’t care,” I refused immediately. “I won’t do it because it’s not an issue to me.”

In fact, as an ordinary girl, I do shave my underarm hair every summer for sleeveless summer clothes, but I just don’t like it and I never remove my hair from the root. And sometimes I don’t shave and am indifferent to whether the armpit hair is visible or not. In a nut- shell, I never feel ashamed of my armpit hair. Maybe that’s because I’ve had thicker body hair than other girls since childhood and have long been used to the reactions of others.

I’ve always had thick arm hair. In primary school, there was a boy, one of my closest friends, who in jest nick- named me ‘gorilla’. I reacted angrily, but was never truly bothered by it because I knew that he didn’t mean any offence. That’s the environment in which I grew up: people freely talked, or even joked, about my body hair without any malice. Yet at the same time, they sometimes said as a consolation that girls with hairy arms would become beautiful after they grew up.

I myself was never worried that my body hair would cause any impairment of my beauty or do any harm to my personal image. All I knew was that body hair was an indivisible part of my body and a native part of myself as a ‘being’ – for me, to hate my hair is to hate myself. But I cherished the ‘being’ of myself so much that I was willing to accept all of its inborn defects. As for the opinions of others, what’s the point of befriending someone who can’t even accept a little body hair of yours? And if they are not a friend, what’s the point of caring so much about how they judge you? Ultimately, for me, the meaning of body hair de- pends on how I see myself, but not how others see me. For this reason, I sometimes made fun of my arm hair but had never thought about removing it.

Not until my armpit hair grew.

I finally yielded to the popular aesthetic standard that keeping and exposing underarm hair is disgraceful, and even vulgar. As all of the girls started shaving armpit hair, I had my first try too.

I will never forget when I tried to remove my under- arm hair for the first time. After I spread the depilatory cream over my armpit, those little black things soon fell down on the skin faintly and groggily in a puddle. I thought of the corpse of some kind of animal. If armpit hair has its own life, then these are its corps- es. I was the murderer of my own armpit hair, who shared the same life with me. Thinking about this, I scraped off all the hair just like removing hundreds of thousands of dead bodies from the battlefield, with my stomach churning and teardrops uncontrollably falling.

Afterwards, I gradually got used to it and became a cold-blooded murderer of hair. The vivid impression of my very first experience of hair removal, however, has long stayed alive in my mind. Generally speaking, I’m not a conservative person. The strong aversion to hair removal comes from my guilty conscience for what I’ve done to my own body.

The Korean film Love Fiction has an interesting take on how society views women’s armpit hair. The protagonist, novelist Goo Joo-wol, falls in love with photographer Hee-jin, but is shocked by her armpit hair. A famous and warm scene from the movie is Joo-wol’s apology to Hee-jin’s underarm hair. He says,

“I don’t mind your armpit hair because I love fluffy stuff. The most important thing is that it is a part of my lover Hee-jin. So, little cute armpit hair, I like you and I would like to meet you every day.” He even writes a novel named Madame Armpit Hair based on her.

Ironically, however, Joo-wol takes it as a lover’s privilege that he and he alone can see Hee-jin’s armpit hair. When he finds out that Hee-jin never avoided showing her armpit hair in public, he imagines her as a slut and his love for her falters. Despite the happy ending in which the couple reunite, the film brands Hee-jin’s armpit hair solely as a result of Alaskan cultural influence. Joo-wol’s determination to be with her never dispels the rumors and bias which depicts women with armpit hair as unchaste. Overshadowed by the male chauvinism of East Asia, armpit hair is endowed with a social meaning of female chastity and objectification. The most that is asked of men, on the other hand, is to concede to a woman’s dis- solute past.

Every time I shave, I can’t help asking why girls, to varying degrees, should be forced by society to do something with their body even when they are not willing to. Because, in mainstream aesthetic and popular culture, men are not usually worried about show- ing their body and armpit hair, and society as a whole is more tolerant towards the male body and its appearance. Admittedly, there is an increasing number of men who shave their armpit and other body hair, and there are arguments for the benefits of hair removal out of aesthetic, hygienic, religious and various personal reasons. Yet, in light of seemingly ‘scientific’ hygienic consideration, it’s worth noting that removing hair is not the only way to keep hygienic and get rid of body odor. Instead, keeping body hair has its own advantage in health.

Here, I’m not speaking for feminism or arguing for stopping hair removal. What I really want to say is, re- spect personal choice regarding people’s bodies and their body hair. Whether they shave or not, take them as you would if they had a different hairstyle. After all, every Madame Armpit Hair deserves to be loved and respected.