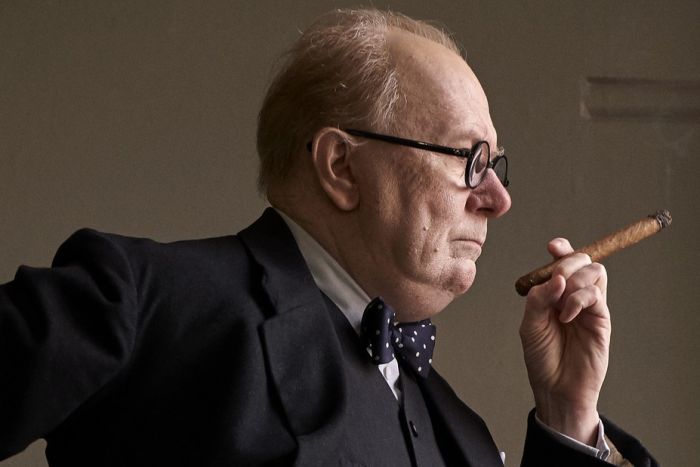 Darkest Hour is yet another ‘Oscar-bait’ film documenting events of the Second World War. This take focuses on Winston Churchill rising to the Prime Minister’s office during the most hopeless stage in the Allied resistance against Nazi forces. The film details Churchill’s defiant stance for victory rather than negotiations, as well as following Operation Dynamo, the same conflict captured in fellow best picture nominee Dunkirk. The Academy can never resist nominating a historical biopic that involves accents, war and prosthetics, which I think can be the only explanation for its nomination alongside these superior films. And yet, I am still somewhat surprised that Darkest Hour secured a best picture nomination in the place of more original films from this year such as I, Tonya.

That is not to say I didn’t enjoy the film. I did. But there was nothing particularly compelling about the structure or storytelling, and it went on far too long with no satisfying climax or resolution. The choice to focus almost exclusively on Churchill lost the opportunity to feel the emotional weight of what was at stake with each decision he made and the supporting characters where painfully underdeveloped.

Less surprising however, is Gary Oldman’s best actor win. He is excellent in this role, and embodies this character brilliantly. A character such as Churchill has always given actors ample opportunity to show off: his accent, quirkiness, stature, humour, and inspiring speeches all lend to critically acclaimed performances. Oldman’s sweep of award seasons wins sees him join a bevy of actors who have won critical acclaim for portraying Churchill (See Albert Finney in The Gathering Storm, Brendan Gleeson in Into the Storm and John Lithgow in The Crown). This does not deduce from his likely win, but it does make it unsurprising that this is the role for which the long underappreciated actor will finally (most likely) receive an academy award.

Darkest Hour, like most Oscar nominated films, is still worth the price of entry, but beyond Oldman’s performance there isn’t anything fresh to get out of this re-telling.  While you may be entertained, it is likely you will have forgotten the film within hours of leaving the theatre.