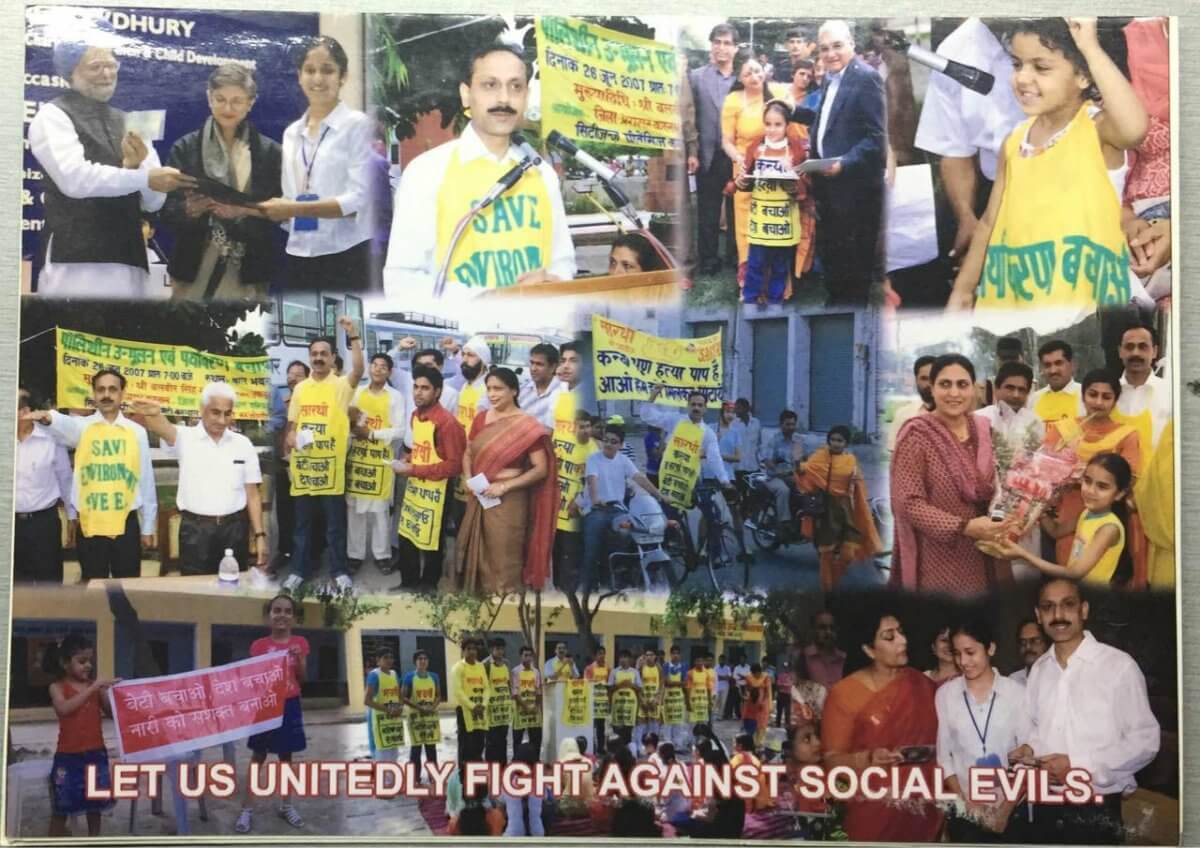 Photo: A glimpse of Sanjoli and her father's NGO in action.

(Cry of an unborn daughter from her mother’s womb):
I cry, I beg, I beseech

From the womb of my mother.

O papa! Bring me to your world

The one you talk about to mumma.

Where daughters are considered Goddesses

And the bearers of human life.

Let me grow into a beautiful doll

And swing in the cradle of your love.

Let me be a flower in your garden

Spare me a chance to live.

I’ll live on whatever you give

I shall not snatch my sister’s toys nor shall I ask for any comforts.

Just spare me a chance to live.

To come out not in fragments but with body and soul

Do not bury me in the hospital’s backyard

Let not doctors kill me for a few coins.

After all, I belong to you, papa!

I dream of decorating your room

Just accede to the prayer of mine

Spare me. Don’t kill me. Bring me to your world.

From the womb of my mother.

This world has been patriarchal. History is full of women’s movements demanding equal rights as their male counterparts. Right from her birth, rather before her birth, a woman has to bear unacceptance and trauma in many countries, especially in India where selective abortions are carried out, thus killing thousands of female fetuses every year. And even if they are born into this world, many of them are soon abandoned. So, their fundamental right to life is denied. How can the world be so tyrannous?

There exists a strong desire to have a son who is perceived to be an asset and an investment, whereas a daughter is considered a liability. In the Indian society, parents often consider a daughter to be a financial burden since she will have to be educated and, later on, married off with a huge dowry. Moreover, safety of the daughter always remains a concern for the parents in the wake of rising crime against women.

Why does this mindset exist even in the 21st century, when women have left no stone unturned to prove their mettle?

Surprisingly, not many people realise the long-term implications of this malpractice and crime. It must be understood that it will have lasting social as well as economic repercussions and this can cause a total imbalance in the society.

It might not be easy to stand up against traditional practices and to challenge societal norms, but it is definitely important. It is crucial to influence positive change, and that has been the mission of my life.

I was hardly five when my younger sister was about to be born. Our relatives were pretty upset to know that my parents were going to have their second daughter, which according to them was an ill-luck. While my mother was being pressured to have an abortion, my dad was being brainwashed. The episodes surrounding her birth were very disturbing for my parents, but the pressure from all corners failed to deter their grit. Although my mother gave birth against all odds, my parents still seemed perturbed. When I asked them the reason, they told me/ laid out the reality of how rampant female feticide was, especially in North India where the female sex ratio once was as low as around 650 girls to 1000 boys. When I learnt what the concept of female feticide actually was, I was shaken to the core.

My sister’s birth was an awakening for us and, in a couple of days, we all started campaigning against female feticide. Gradually, it became a mass movement and a nationwide campaign. The national dailies splashed this news, sensitizing masses. We organized various peaceful protests, cycle rallies, street plays, talks and seminars in universities and colleges to change society’s mindset. Also, we started working at the grass-roots level, thereby, visiting people, especially in villages where the female sex ratio was very low. We would talk to women, listen to their problems and counsel them telling that there was no difference between boys and girls and that girls were no less. When we saw our efforts bear fruit with more and more people understanding the concern and the female sex ratio gradually rising, we never looked back. My efforts were acknowledged and, subsequently, the state government honored me when I was just seven, making me one of the youngest social activists in India. This cause gave me meaning and a purpose in life. Soon, I became the voice of millions of unborn daughters appealing a lease of life for them. My father and I directed a documentary film called ‘Beti’ (Hindi translation of daughter).

In 2015, we wrote a letter to the current Prime Minister of India, Mr Narendra Modi, with 14 pragmatic suggestions to curb female feticide. It is worth mentioning that the Indian Government has adopted five of those solutions and is considering the other nine. We feel strengthened to see that this issue is a national concern now with many Indian celebrities and political leaders talking about it.

Hopefully, one day, people will discern that girls are assets and possess an infinite potential to do wonders. They deserve equality and empowerment through education. We all need to stand up against female foeticide, the dowry system, illiteracy among women, domestic violence, sexual assault and harassment. Let us join hands to create a world where mind is without fear and everyone’s head is held high.