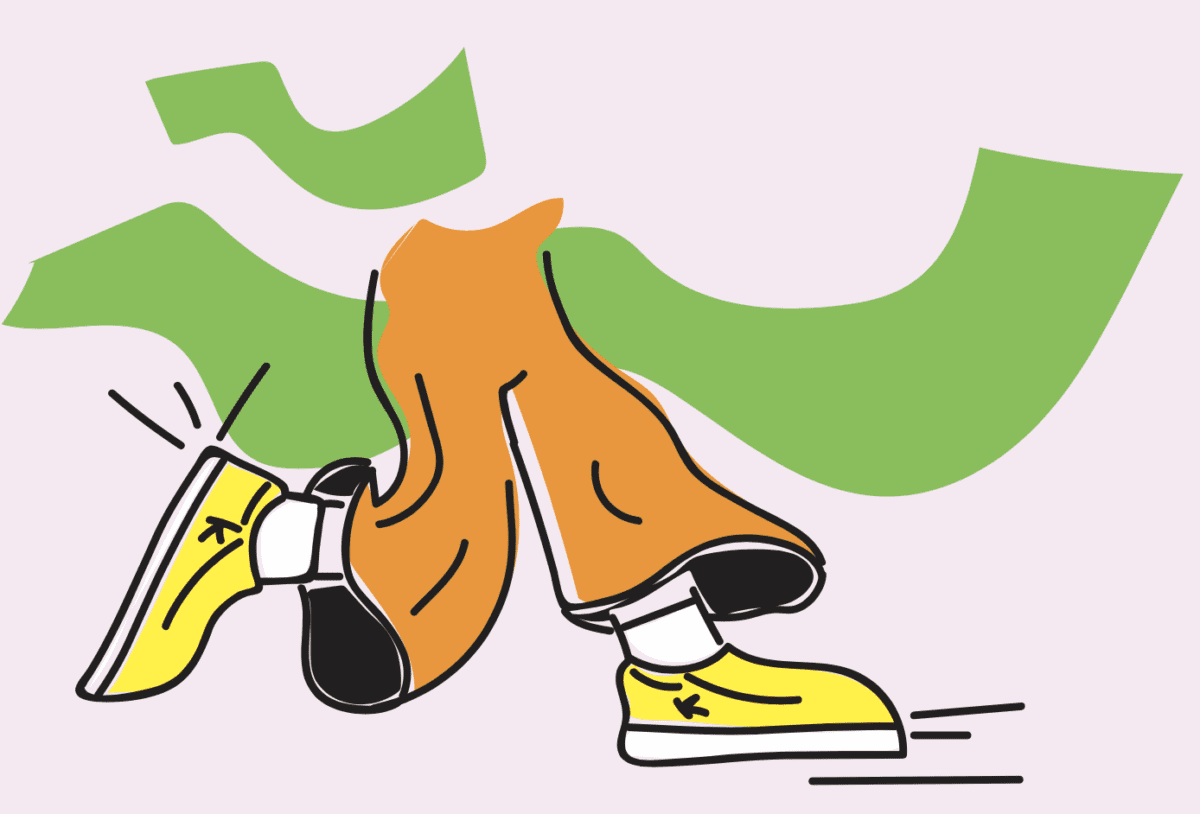 It’s 3am, and I’ve decided to go for a stroll. It’s a really nice night. I got these cool new kickers that I’ve been wanting to wear all damn day, but I was too busy listening to this cool dude. His name is Yellow Days. He’s neat. As a matter of fact, I’m listening to him right now, as I walk; in my new kickers. Is there anything in the entire world better than new kickers? Maybe dancing in my new kickers.

I brought my dog Stanley here too. He’s old. I think he’d be a hundred if he was a human, so I treat him how I’d imagine treating a grandparent: I forgive him when he poops himself. Our walks are quite slow. He smells like a fossil, but I love him. He’s got plenty of things wrong with him – he’s a bit blind – and a bit deaf –but he still enjoys his treats – and when I dance with him. I once made a promise to Stanley that when he dies, I’ll die too. I’m not so sure I’ll do that now that I have these new kickers, but we’ll see. I hope he’s not scared of dying.

I rarely feel confident, but right now; at 3am in my brand new kickers, I feel like a king. Of course, nothing matters, not in my world. It shouldn’t in yours either, but that’s just my opinion, and that’s okay if you think you’re important. I don’t think I’m important, I’m average at most things, but damn, these new kickers are really sweet, so I guess I’m good at buying new kickers? Have you ever bought new kickers and just stared at them for hours? No? Just me?

It’s upsetting knowing people are asleep right now – they can’t see me looking and feeling cool and all. Worst of all…they can’t see Stanley! I suppose they’re lucky they can’t smell him. They’re dreaming about some envisioned reality, like maybe heaven – or hell. I’m Herbert Franklin, I think it’s a kinda neat name, like my kickers and Yellow Days; at 3am, super neat. I haven’t met another Herbert, or Franklin for that matter. I do know a Frank; he’s a janitor, but he’s nice. I once talked to him about fishing. I’m not too fond of fishing, but he told me he once caught a Loch Ness monster. I think he was joking, because he was laughing, but I think he might’ve been laughing at how cool it would have felt to catch a Loch Ness monster.

The air is cold, but in a pleasant way – it’s that pre-winter air that’s sharp but not so cold that I really notice it. I hate feeling like pants aren’t enough, that’s when it’s too cold for me. Luckily, I’m just wearing boxers and my legs are feeling fine. I’ve always wondered how girls don’t get cold without leg-hair, and then I think how hot Stanley must be. I also wonder how he puts up with the smell of fossil. Onions would be better. I do like the night-time though, the moon brings out a kind of feeling in me, one that the sun just can’t compete with.

I can smell frying onions. I don’t think Stanley can, I’m not so sure Stanley knows what’s going on. I don’t know who would be frying onions at 3am in the morning – while I’m wearing my new kickers – but hey, I think it’s neat that someone might fry onions at this hour. It’s tempting to go in and have some fried onions, but I’m okay with knowing that someone out there is enjoying some.

“Herbert!” I hear. Oh wow, someone else is here at 3am. This is cool. I can show them my new kickers. I turn around. It’s Donald, he’s 2 feet tall and is holding fried onions.

“Hi Donald! So you’re the source of those delicious scented onions!” Donald smiles, and offers me some onions. I gladly accept. “Those are really good fried onions, Donald,” I say. “Hey, have you ever listened to “Yellow Days?”

Donald, with onions still in-and-out of his mouth replies, “Yeah, isn’t he the one that sounds like Ray Charles?”

I eat onions with Donald until 3:32. I even give Stanley some. The air feels warmer, but I think maybe that’s just the fried onions giving off a fiery aura around us.

“Do you like my new kickers, Donald?” Donald silently nods, then looks down at his bare feet. He looks upset. Maybe I should give him my kickers. Dang, I just got them, but he gave me his fried onions, and they were pretty neat, so I unlace my new kickers, and offer them.

“Try them on, I don’t know if they’ll fit though.”

“I can’t accept them…” Donald says, as he accepts them. Somehow, they seem to fit his little feet. “Thanks, Herbert, I won’t forget this,” Donald says, with a smile befitting of my new kickers. As we continue to eat onions, I decide to ask if he’d like to listen to Yellow Days with me. He politely declines.

At 4am, I walk home in my socks. The ground feels pretty solid under me and Stanley and I are OK. I might give him a wash when we get home.

What I Think About When I Can’t Sleep

Desire of a Truant Morning