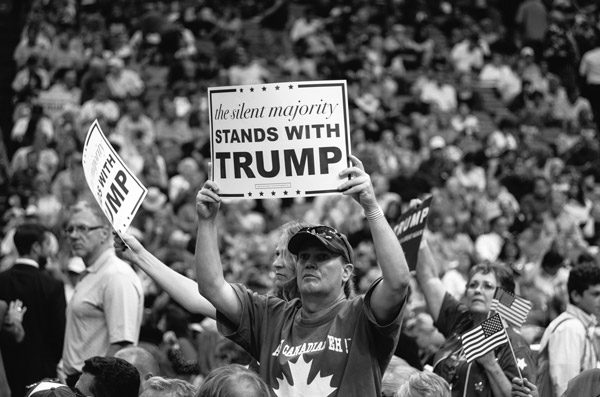 How did he win?

It’s the question on everybody’s mind. And since assertions have apparently been ratified as a legitimate contribution to public discourse, boy, do I have one for you.

Donald Trump won because of shame. Shame is not just an emotion – it’s a prepossession of character. Merriam-Webster, America’s foremost dictionary, offers us a description of shame: “a painful emotion caused by consciousness of guilt, shortcoming or impropriety.”

And by gosh is shame the logical follow-through from bruised pride, you just have to put yourself in the mind of the average American white man to see it …

We white dudes could have it all, back in the day. Back when we lived in Reagan’s “shining city on a hill” the privilege of America was enormous, and to be privileged in America was the stuff of dreams.

It shatters you to the core to have your entitlements ripped away. If Americans worked hard, why couldn’t they have it all? Well as the then-Governor Mario Cuomo identified in 1984 at his convention speech, America was more “a tale of two cities.”

Reagan’s shining city of privilege was enjoyed by those in it, but the city’s lustre had been torn from the grasp of those outside the city walls. The white man could stand tall, while his podium’s arms and legs would quiver, spine buckling underfoot.

Sure, we were okay with fuelling our lives with disadvantage, as long as we couldn’t see it. Never mind that Reagan left office having trebled the national debt that Jimmy Carter left him. The golden years of Reagan were not to last, but somehow that became the minimum standard that white guys would accept.

The audacity of this woman, to come and tell us she had ideas – when man is the one whose fate is at stake, when man’s pride hangs in the balance, and when the mind of a man is the only one who could really appreciate the depths to which we’ve fallen from those lofty heights we once inhabited – it is an audacity that must be punished. And throw in Obama’s “Audacity of Hope” while we’re at it.

We don’t need hope. This is a zero sum game. Black people took our safety. Brown people took our jobs. Women devalued our jobs. Leaders took our balls. The intelligencia took our voices. We need to take it back, not to hope it back. We restore ourselves by degrading the groups who detract from us. We didn’t even necessarily need to win the election. If need be, some of us would have tried to take it by force.

Like a beaten dog cowering in a corner, we were ashamed that we had lost our way. And we were ashamed that so many of us couldn’t say out loud that it’s all your fault. And that, to me, is the kicker. It’s why the results came in as they did, and why the polling didn’t predict it.

Liberals had, for some reason, decried me as a racist and a sexist. It wasn’t that I hated other races. I didn’t hate women. I knew there were others who did, and that was really disappointing. For me it was that I was so completely consumed by desperation. I was ashamed that I had been socio-economically neutered. A woman could not restore me.

I was so hungry for a return to the days where I felt like I could scrounge out even one skerrick of happiness from the bleakness of the universe. But I didn’t have to be sad. I could rally. As women and people of colour had tried to profit by harvesting my rightful place, I had to push the pendulum back.

I didn’t want to hurt those groups. But maybe there just wasn’t enough money to go around, and I wanted to get as much as I could – to hell with the others. Donald Trump would bring my money back from China.

We all knew he knew that women really weren’t cut out for work, but he maintained a visage that “nobody has more respect for women than [him].” Yes, he knew that we had been wronged by African-Americans, but contended “I have a great relationship with the blacks.” We all knew he would help us screw Mexicans, but then he ate that taco bowl and said “I love Hispanics!”

He was just like me. He knew we were getting screwed by people that weren’t white guys. And it wasn’t their fault – they were only taking what they could get. But Donald Trump took everything he could get, and wouldn’t be shamed by liberals like the rest of us. He really was “smart” with his taxes, because if you could get away with taking something, who was anyone else to expect you to leave it?

He tells me I can “take our country back.” That’s when I know we’re on the same level. I am sad and ashamed about what we’ve become. And Donald Trump is my pride resurgent.

It is mine to live in that shining city on a hill. And it is for others to share in “its splendor [sic] and glory.” I’m sorry that there isn’t room for you here. While I find you annoying and inaccessible, I don’t actively want bad things for you. Please just accept that you need to be ignored.

I hate having to do this to you. For what it’s worth, I’m looking away as I jam the pillow in your face. But I’m tired of having to fight, and he gives me energy. He lets me know that it isn’t my fault. The experiment of equality flew too close to the sun, and it is time for the proper order of things to return.

Minorities, please let me stop straining. Please leave while I get back to the business of America. I genuinely don’t hate you – I’m pretty sure. I just can’t let you win because I am so sick of losing.

Donald Trump is a guy like me. And for him to win would be such a validation for the self of which I have become ashamed. I am ashamed that I am too craven to let you share in America, but I’ve stopped believing in life jackets and you’re my flotation device. It is because I am guilty about my benign hatred, and because America has fallen so short. I am ashamed because in amongst all of that I am expected to be proper? Fuck you.

Political correctness isn’t about being forced to alter my language in an inconvenient way. Political correctness genuinely does silence me. Stop telling me my views are invalid. I understand that they might be unappealing to some inner city liberal who isn’t being challenged, but hard truths must come out. Donald Trump speaks them. Why shouldn’t I hate the best explanation I can muster for why everything went so wrong?

He thinks the way I do, so I follow him. He lacks the shame that smothers me and my brothers in arms when we want to speak our minds, and so he is my idol.

I am in the “silent majority”. I am the “voiceless” to which he will give a voice. I’m not secretly a racist, I just care more about me than them. I just want to go back to being put first, please. The average citizen has it pretty terrible, and I refuse to be told that it’s “wrong” that I’d like to sit on top. I know my views aren’t moral, but I no longer have to be sorry in telling you that I don’t care.