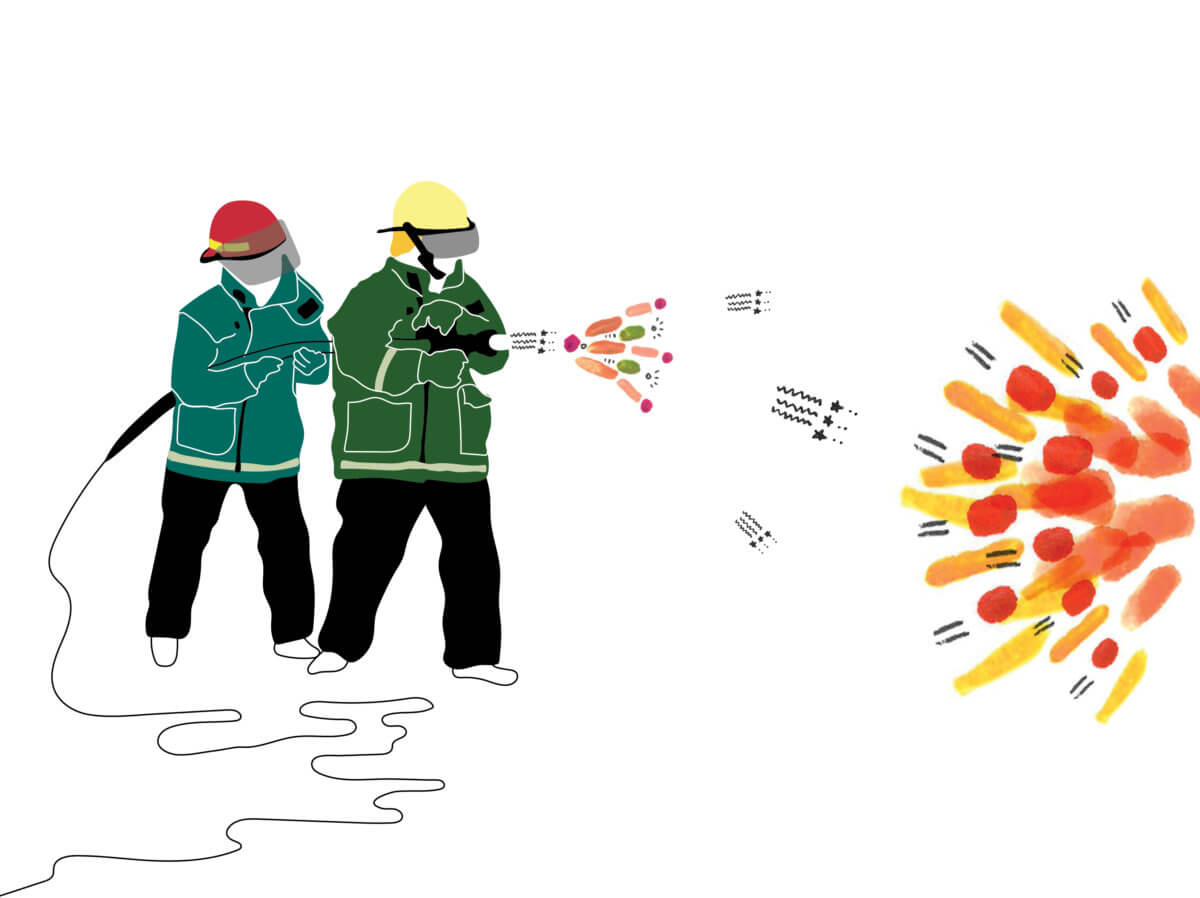 Like many issues in contemporary science, fighting Australia’s ever-increasing bushfires is as much a scientific issue as it is a social and political one. We know that the First Australians used fire and back burning for millennia as a way of managing their land. What could both history and design teach us about our attitudes towards natural disasters? And could we use it to fight Australia’s bushfires?

When listening to emergency dispatch tapes from large fires, you often hear people reporting houses that have been set alight before the fire front has even reached their neighbourhood! Generally, such houses don’t burn because a wall of fire has raced through the community.  They burn because of something else: the embers.

The embers accumulate in crevices around dry wood shingles in the roof and set fire to the houses from above. Highly-flammable iron-bark wooden roofs were particularly common in 1950s rural Australia, and were responsible for much of the damage caused by bushfires in the 1970s.

While the idea that ‘wooden roofs catch on fire easily’ may not sound like a huge revelation, it actually helps us reanalyse our wildfire problem as a design issue rather than an inevitable natural disaster. Our homes and communities are designed to burn.

Australia’s firefighting services have long been prevalent. Victoria’s Country Fire Authority was established in 1945 and the NSW Rural Fire Service has been around since 1896. Collectively the two organisations employ around 95,000 people and have an annual budget of $850 million – providing us with high tech planes, helicopters, and kitted fire crews designed to fight fires better than ever before. And for a while, these mechanisms seemed to work. Fires were put out, lives and buildings were saved. But the better we got at fighting fires, the stronger they became.

By preventing fires, you also encourage tree regrowth and the accumulation of undergrowth and dead vegetation, making bushland denser. This means that when bushland does catch on fire, there’s more material to burn; fires burn bigger and hotter than ever before.

In the late 1990s, a researcher from the US Forest Service, Dr Jack Cohen, conducted a series of full forest fire experiments – sectioning off blocks of boreal forest in Canada and setting it alight to observe its behaviour. What he found in his experiments was that while an entire forest could be on fire, a building standing 10 metres away from it could be left unscathed if designed effectively.

Most ember fires can be stopped with some simple design solutions. For one, replacing your wood roof is an obvious answer. Smaller-scale, more nuanced ones include ensuring your garage door has a tight, concrete seal to prevent embers from entering the house and removing flammable items and undergrowth within 30 meters of your house. These design improvements mean that we can let more bushfires burn natural, and finally break free from the vicious cycle of fire suppression that leads to the largest infernos.

But there are many barriers to implementing these solutions. For one, it’s expensive to structurally alter your house, like replacing your roof. You may not even have 30 metres of land around your house to clear, and if you’re a renter, you probably don’t even have the authority to make any changes at all!

Although design changes will lessen the effect of bushfires, we also still heavily rely on our fire services. The NSW RFS ethos is to “[protect] infrastructure and environmental, economic, cultural, agricultural and community assets from damage arising from fires”. After all, when there is a fire, people demand an immediate and heavy response. We, the public, expect to see dramatic shots of helicopters flying over raging fires, dropping water over thousands of hectares of burnt bushland.

Because of climate change, the fire season is only getting longer. But instead of resigning to fatalism that ‘nothing else can be done’, we instead need to recognise that indeed, there is plenty to do.  We need to ensure that our policies reflect the efforts we are making to effectively prevent bushfires. To do so, our attitudes towards managing our own properties, and the expectations we hold towards our governments and fires services need to change.