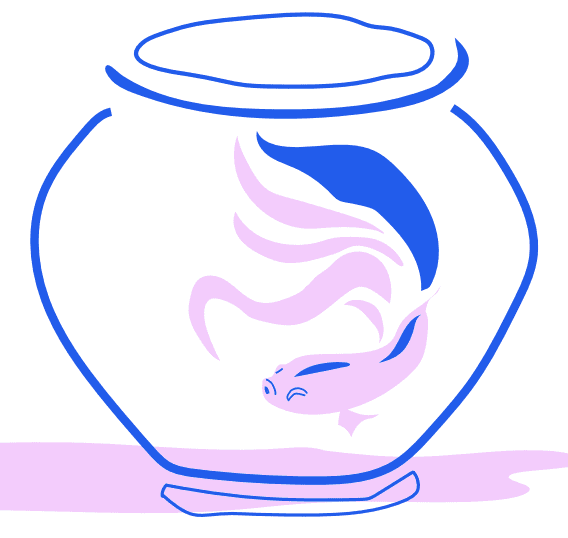 I got dumped the day before Christmas Eve. There’s a blue Siamese fighting fish called Edwin shimmering around in a five litre glass jar to my right, and he keeps looking at me. Fuck off, Edwin.

I have a void where my culture should be. It’s a hole roughly the size and shape of Edwin’s vessel, and it’s weighing emptily in my stomach. If you were Edwin and you swam down into my void you would see that its walls are lined with objects. There is a TV screen, American sitcoms flickering through it. There are thousands of books, their pages softly waving in the water. Blank pages and pencils and old laptops. Screens bared, open to various Tumblr pages from 2014. Tattered school books, plane tickets, luggage tags, metro cards, and stubs from before. Packets of mi goreng noodles, holographic posters of Hindu idols, incense, Buddha figurines, art history books in French, archaeology books in German, books on anthropology, books on linguistics, hiking boots, yoga mats. The tiny things that people I love have given me. A small ceramic dog from Japan. A rusted tin with a pink elephant on it. A lace ribbon. Heart-shaped post-it notes scrawled with messages.

A voice reverberates into the depths of the void from far beyond the surface: “Don’t wait for me,” it wobbles. “Being in ________ has made me think about how much my culture and my family mean to me.”

I knew what they were going to say before they said it, but the words still punched me right there in the empty place. I had known what was coming, because I had spent envy-filled hours imagining what it would feel like to be them. I imagined having a home and a culture and ‘getting in touch with your roots’. These hours led me to the conclusion that they would be unable to reconcile having both their culture and me.  I was, unfortunately, by some stroke of intuition and paranoia, correct.

How is it that someone else having something only makes you more aware of your not having it? I’ve never experienced it, but I imagine it so vividly that I can feel it. Going Home For Christmas. I imagine them surrounded by their family in a country that means something to them, where they were born and where their culture comes from, where the land feels like theirs and people look like them. To me the fact that any of those qualities intersect seems magnificent. I hear what is implied: “You are not part of my culture. You are not part of my family.” And of course, it’s true. And then I hear my stupid, panicking heart: “You have no culture. You have no family. Not like that.” I look around frantically for ways to prove that I do (to win this competition), but there’s nothing for me to grab hold of.

My family does not have traditions. It is Christmas Day. My mother has the flu, so all socialising (not with family, only with friends) has been cancelled, and gifts were exchanged two weeks prior with an explicit agreement: “Would you like this as your Christmas present?” and a transaction. I had walked out of the shop wearing a new necklace. Mama watched me sew her a pair of trousers over a week. Papa is with his Australian girlfriend’s family in the country, hours away from here. We’re staying in a home that is not ours. Today is like any other day, except that today made me cry. I feel the void keenly. Mum wants to watch Netflix and lie on the couch, but every time I start to move, I imagine my ancestors slipping away from me. In my fit of melodrama, I feel immeasurable resentment and loneliness.

My family abandoned our traditions and pushed away our identity because during segregation in California, it’s what we had to do. We said we were Italian, and we said we couldn’t speak Spanish. When someone asked where we were from, the response was: “Who’s asking?”. We told ourselves we had no Indigenous blood. We told ourselves we were white.

My parents were pushed out of their nests early, and they learned how to fly in an America that was liberal and smart. People of colour (because, of course, they still existed there) wore expensive hiking sandals, used the word ‘praxis’ regularly, and ordered delivery dinner. They had identities that had already been cultivated, picked apart and rebuilt into American shapes.

A rule: it’s never a good idea to base things on other already diluted things.

This rule goes for romantically tragic French alcohol. When preparing a good glass of absinthe, the only accepted method is to begin undiluted and fir-tree green, and to trickle in ice water over a slowly melting sugar cube.

The rule goes for information. If reading a scandalous newspaper article, it is important to first find the original source and base one’s judgement on that instead.

On the floor, in the middle of the watery void, lies a haphazard stack of objects that I threw in it in the hope that they would fill it. They’re candy almonds, la virgen Maria, a tortilla press, a lace shawl to cover my hair, a multicoloured rosary, and a tapestry from Oaxaca. Nothing distinguishes them from the objects pressed into the walls except for their place in the pile.

Today I will throw another object onto the pile in the void. I will make some tortillas from scratch and make my mum watch a movie from Mexico with me. I will put on Chavela Vargas, and maybe some flamenco, and think about buying marigolds and poinsettias for my room. I will try to distinguish myself from educated atheistic whiteness as much as I can, because it’s Navidad. But I will speak to my mother in English. The words we pronounce in Spanish will sound inorganic. I will not recognise any landscapes from the movie, because my feet have never touched Mexico’s soil. I will not speak to family today because of the time difference, because we have nobody in Australia, and because when I do speak to them I get annoyed, because I’ve grown used to having nobody to answer to. Today I will celebrate no tradition.

Edwin’s owner has Gone Home to Queensland the way the owner of the voice that broke up with me Went Home to ________. I’m sorry for telling you to fuck off, Edwin. Maybe we can just spend today enjoying swimming around our voids.