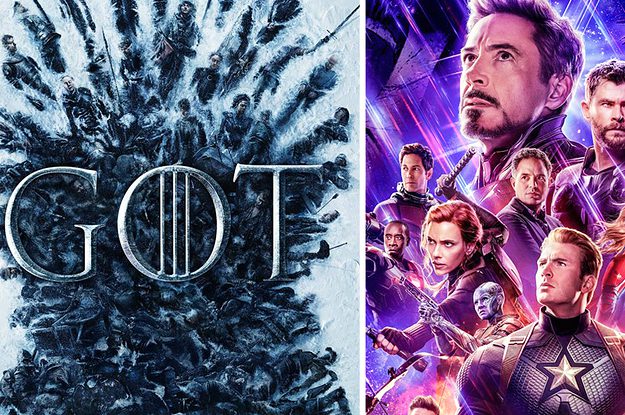 30.5.2019 by Brandon Tan and Josie Ganko
WARNING: SPOILERS FOR BOTH AVENGERS: ENDGAME AND SEASON 8 OF GAME OF THRONES

In a rare collision of two huge pop culture phenomena, the release of ‘Avengers: Endgame’ fell within the six-week run of the eighth and final season of ‘Game of Thrones’. Arguably the biggest events in cinema and television respectively in this century, it was a strange coincidence that saw these two highly anticipated projects being released so close together. Both acted as finales to long spanning storylines, and both were incredibly highly anticipated, but what was shockingly different was the audience response. While ‘Endgame’ hit the mark almost perfectly, ‘Game of Thrones’ has been torn apart by critics and fans alike. So what makes a finale great? How do you end a decade-long storyline in a way that satisfies everyone?

To see a successful example of this, we first look to ‘Endgame’. It was as if the year-long wait between the cliff-hanger ending of ‘Infinity War’ and the release of ‘Endgame’ went by with a snap of a finger. ‘Avengers: Endgame’ rewards fans who have kept up with this 11 year journey. We know that we’ve reached an ending when there is no post-credit scene (the first movie without one in the MCU). But ‘Endgame’ managed to satisfyingly conclude this arc to almost universal acclaim. Audiences keenly felt the impact of seeing their favourite superheroes turned to dust, but ‘Endgame’ provided one last world-saving hurrah for the original six avengers (Iron Man, Captain America, the Hulk, Black Widow, and Hawkeye).

With a run time of three hours, ‘Endgame’ is packed to the brim with surprises. Upon a five year time jump we find Chris Hemsworth’s Thor has not handled the years well, Ant-Man’s backstory becomes central to the plot, and Captain America is shown to be worthy and capable of wielding Thor’s hammer, Mjolnir, during the final clash (in my theatre, this elicited cheers from the audience). But where ‘Endgame’ really succeeds is in its emotional punch. While everyone braced for the loss of characters, the manner in which beloved Tony Stark was killed was touching, true to character, and earned in terms of the character’s arc and the stakes of the film. Similarly, while Captain America didn’t die per se, the loss of Steve Rogers as we knew him was heartfelt and meaningful, and also came full circle in the development of Cap’s storyline.

But wow, did ‘Game of Thrones’ mess up when it came to hitting those points. Similarly to ‘Endgame’, every ‘GoT’ fan went into season 8 with bated breath, waiting to see which of their favourite characters wouldn’t make it out alive. I can quite happily say that not a single death in the final season packed the emotional punch it could’ve. Some were passable and slightly better than the rest: Lyanna Mormont got a fitting exit, Jorah’s was okay, Clegane Bowl somewhat matched the hype, and weirdly Cersei got an emotional finish to her life. That’s basically it, though.

In a show like ‘GoT’ where death has been so integral to the plot, to mess up such key deaths was detrimental. By the last episode, it was obvious Daenerys was going to die – her entire storyline was completely destroyed in the final two episodes at the expense of the ‘mad queen’ plotline which made very little sense. Not two episodes earlier she sacrificed half her army to fight for the living, and now we’re supposed to believe she’s fine with killing a whole city for no reason? By the time it came to her death, Jon plunging the dagger into her stomach came with a sense of relief more than any emotional impact.

I could go on forever about the plot holes and random things that never should have happened, and total disregard to storyline that made the final season so disappointing. But what really destroyed this season was its disservice to the characters. Sansa crediting her rapists for her growth, Dany going mad, Brienne crying in the cold as Jaime left her, Arya forgetting about all her skills and training, Cersei getting about two minutes of screen time – the women felt particularly disrespected in this final season, which made it all even harder to accept.

While ‘Endgame’ killed off characters in ways that felt deserving by completing character arcs, ‘GoT’ destroyed the character development of their most beloved characters in the episodes before their death for some perceived shock value, and the disparity is clear. While ‘Endgame’ was still filled with epic moments and twists, it was first and foremost a conclusion in service of the characters and ultimately the fans. By contrast, I’m not sure who the final season of ‘Game of Thrones’ was made for, because both the characters and the fans have been left in the dust. I think the close release dates of these two cinematic events just demonstrated the two ways a finale can go: ‘Endgame’ showed us how to nail the final act, and then a few weeks later ‘Game of Thrones’ showed us how a finale can disappoint basically everyone.

Avengers: Endgame is currently showing at Dendy in the Canberra Centre.