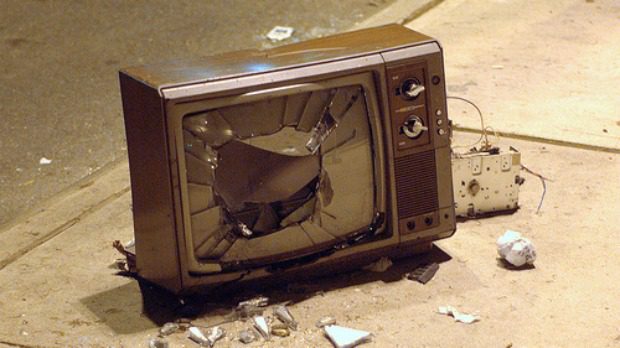 A Sewer of Political Discourse

I have a confession to make: I love trashy 90s daytime TV.

My favourite episode of Jerry Springer is called ‘I Married a Horse’, and it is about exactly what you think it would be about. Jerry starts by bringing Mark and his ‘partner’ on stage, where they proceed to make out for what would otherwise be an uncomfortably long time for humans. Needless to say it’s absolutely phenomenal television.

Another one of my favourite episodes is ‘Single Mum Can’t Control Their Kid’. First off, Jerry introduces the parent who tearfully explains that their child is ‘just out of control.’ ‘Awwwwww’, the crowd coos, as Jerry nods like the understanding therapist we are led to believe he is. The kid comes out next, cursing profusely to a chorus of boos. The camera pans to an entire room of adults jeering at the 12-year-old. ‘You’re such a bad mother,’ the child yells, ‘*beep*, why don’t we go outside?’ The crowd revels in it. They continue to humiliate and insult the poor 12-year-old kid for the duration of the segment, whose only crime was having the type of mother that takes their kid onto Jerry Springer in the first place.

You see, people like blood sport. It’s frightfully entertaining.In this sense, contemporary politics is essentially the same trashy TV that we’ve been watching for decades, only we’ve added the tiniest pretence of intellectualism so to convince ourselves that it’s not.

It’s fun watching ‘X gets BTFO on Y’ or ‘A schools B on C’ videos, not because they make us think, but because they make us feel. And then come the edits, the dubs and the bad lip readings. Acknowledging our desire for cheap entertainment is the first step towards being able to separate the good from the bad in our current climate of faeces-throwing political discourse.

We should not be surprised when a channel that gave us such shows as Jersey Shore, Teen Mom, and 16 and Pregnant releases garbage like NY Resolutions for White Guys, Decoded with Franchesca Ramsey and White People. By adding the perceived respectability and nobility of politics to their shows, we are led to believe we aren’t watching pure, unadulterated trash.

After all, you can polish a turd all you want but in the end it’s just a shiny turd.

Pauline Hanson, a growing force in Australian politics, made her big comeback in 2004 as a contestant and eventual runner-up in Channel 7’s Dancing with The Stars. Even James Mathison, the other host from Australian Idol, ran as an independent in the 2016 federal election. Everyone knows these shows are crap – it’s why we watch them, and it’s why we should never vote for people in them.

The problem with the trashiness of the present political climate is the conflict it feeds off. When the conflict within a political discussion becomes more important than the discussion itself, the result is an entertaining conversation that never reaches a conclusion. We watch Maury’s ‘Who’s the Daddy?’ segment not because we care about the child, but because we like to watch the dude dancing when Maury Povich announces ‘you are not the father’.

We are consistently making the mistake of thinking it is the conflict that’s important when observing politics, leading to a culture where political arguments are preferred over real discussions. From Milo Yiannopoulos to Clementine Ford, political opponents aim to crush their enemy when instead, they should be engaging with them.

We, and our politicians, should strive to share our ideas and opinions, but not be fixated and unwavering when doing so. If we don’t, constructive communication isn’t possible.

A problem is created when we attribute higher motives and goals to what is, essentially, garbage.

If there is to be any degree of useful political discussion before we finish university, then we, the observers, must learn to sift the trash from politics. Because, if we don’t, we might end up with the guy from The Apprentice in the White House.