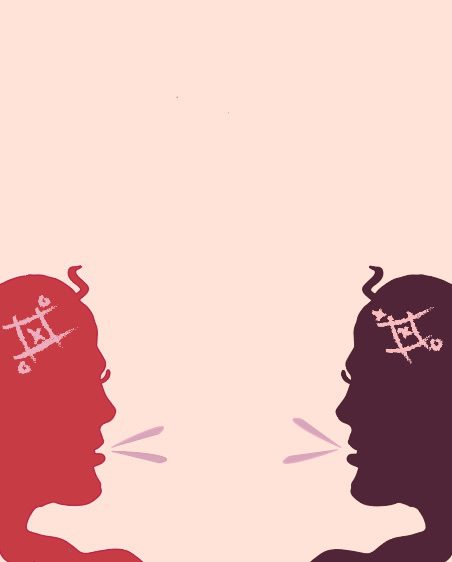 A Novel Strain of Bigotry

I would like to preface this piece by stating that I do not, never have and never will sell caps. What gave rise to this misunderstanding is beyond my comprehension. I have considered that it may have been my boots, which were jacquard and funky, like serotonin, or maybe it was my bleach-blonde tips which made me look reckless but not overtly meth-y. At any rate, getting asked for drugs on the pavement between the Wolf cesspool and the Smiths smoke haze is hardly an accomplishment.

It’s the Friday night of O-Week. I am dressed in what I wore to work, with the exception of my lanyard (more on that later). I have shopping in hand, and I’m on my way home with my roommate to get wine drunk and watch Netflix.

Walking the other way is a gaggle, nay, a murder, of audacious O-Weekers in their Smiths-finest: pink linens, cuffed jeans, copious corduroy. They are white, indubitably. The patriarch approaches: he wants caps. I know this, because he asks me:

“Well you have coronavirus anyway.”

First of all, I understand that lacing up Doc Martens every day and struggling through an Arts degree can be all-consuming, I really do. But considering the World Health Organisation (WHO) has made it pretty fucking clear that the novel coronavirus strain currently circulating is called Covid-19, I would have liked to expect a student at Australia’s best research university to be a little more switched-on. Unless old-mate in the skinny jeans was purporting to diagnose me with one of four strains responsible for the common cold, he really missed the mark on this one.

Second of all, if anyone is going to be diagnosing someone with a disease, it’s going to be me. I’m a biology student, Department of Health employee, and, yes, you guessed it, Chinese.

Having grown up in Hong Kong, I’ve seen my fair share of epidemics. Over the Lunar New Year, I saw the streets once again quieten but for the odd domestic helper scuttling about with trolleys full of rice and/or toilet paper. Meanwhile, the ‘ex-pats’ drank in their beer gardens in Central with their respiratory droplets flying a muck. For a few weeks, every visible Asian person is dutifully wearing a mask. Every Caucasian is dutifully not.

I was in Hong Kong boarding my flight home to Australia when the loudspeakers announced the travel ban. I had to explain to the elderly couple beside me that they had to stay in the city while the rest of the family returned to Brisbane because 「 您是中國 人」 (you are Chinese). The grandparents, along with around 50 other Chinese passport-holders left the flight, with their ‘coronavirus’ trailing unquestioningly behind.

Let’s think about that for a second. I was seated on the flight for an hour before every Mainlander was evicted. Most people weren’t travelling alone. They had been celebrating the New Year with their families. Moreover, there was, at the time this travel ban was announced, an open land border between China and Hong Kong. When Australian biosecurity officers entered the plane to distribute surgical masks, they walked past hundreds of Chinese-Australians already wearing them before having to explain to a young white Australian family that they should consider putting them on despite the fact that ‘they itch’.

I wasn’t able to formulate a response before my accuser walked away, laughing. I’m not sure what I would have said anyway. Somehow, “I haven’t been to Mainland China in years,” or “I signed up for the National Covid-19 task force at work the day it opened” seemed simultaneously inadequate and also none-of-his-business. My accuser was so ready to profile me that I can comfortably say that he’s never had to queue for hours to collect surgical masks so his parents could go to work, or had his primary school graduation cancelled because of bird flu, or seen his swine-flu-stricken brother carried away on a stretcher. The list goes on.

My accuser has the privilege of being able to walk around his own country without being labelled a vector of disease. He has never experienced the need for constant vigilance to protect his friends and family. There may be an insurmountable language barrier between myself and him, so I won’t address him. I will, however, say to everyone stuck in China: 「 加油」.