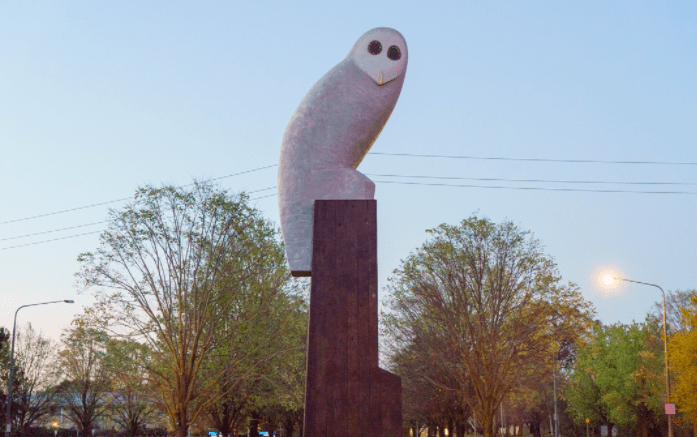 Pompeii, a Penis, and a Not-so-Pious Owl

Okay. Let’s take a moment to transport ourselves back to ancient Rome. Mad emperors, fierce warriors, brutal entertainments, and lascivious lifestyles. But of all these aspects of the luxe Roman lifestyle, the most evocative was indulgence in the flesh. Hence, if you Googled the term ‘Pompeii’, the first item that appears would be ‘Pompeii Brothels’, because let’s be real, sex will always be a prime fascination of humankind.

According to this art history student, anything can be art, including the iconic owl sculpture that carefully surveys the traffic on Belconnen Way, pondering the racing vehicles with its ever-wandering eyes. As its creator, Bruce Armstrong, says, ‘The owl watches quietly over his domain like a guardian spirit or totem.’ Yes, yes, it’s a celebration of the city’s commitment to creativity, but the exposure of such a delicate standalone artwork was dangerous, nay, courageous move by its creator, as he abandoned it to the cruel judgment of the public.

This decision to trust in public respect for the arts didn’t end well, as someone in the modern-day city of Canberra decided to take matters into their own hands – armed with spray cans – transforming everyone’s thoughts about the sculpture into an artistic form: That of a crudely spray-painted depiction of male genitalia. (Queue: A giant sigh of relief that someone had the courage to show it like it is.)

The newly embellished sculpture now radiates with the raw testosterone and erotic energy generated by this new addition. The owl’s eyes of wisdom continue to look forward, towards the never-ceasing flow of commuters, its back towards the civilians living in its shadow. But we must also take a moment to give a silent funeral to the artwork, which, due to its unfortunate-looking silhouette, is doomed to an eternity of being a symbol of the human male productive organ. Being the good citizens we all are, we were taught not to judge others by their appearance, but hey, human nature can be a b*tch. Unfortunately for the owl, we just can’t help it.

One must always read deep into symbolism and over-analyse the true meaning of an artistic work.

Perhaps the modern day simplified version of the spray painted male genitalia is the parallel of mythological representations of sex in the upper-class houses of ancient Rome, where it was regarded as a work of satire and shown in a setting of lighthearted playfulness. But could this be just another example of the suppressed urge to explicitly express our sexual urges today as freely as was done in Roman brothels? Perhaps the addition of the penis was the answer to the long-suppressed belief that the Guardian of Wisdom of Belconnen Way resembled a bit more than its supposed function. So, in paying our respects to the unsuspecting owl with its new creative addition on its torso, let us also stare fearlessly at the penis graffiti as we drive past. After all, recognition is the first step to understanding why we do the things we do. If it was good enough for the Romans, it’s good enough for us.