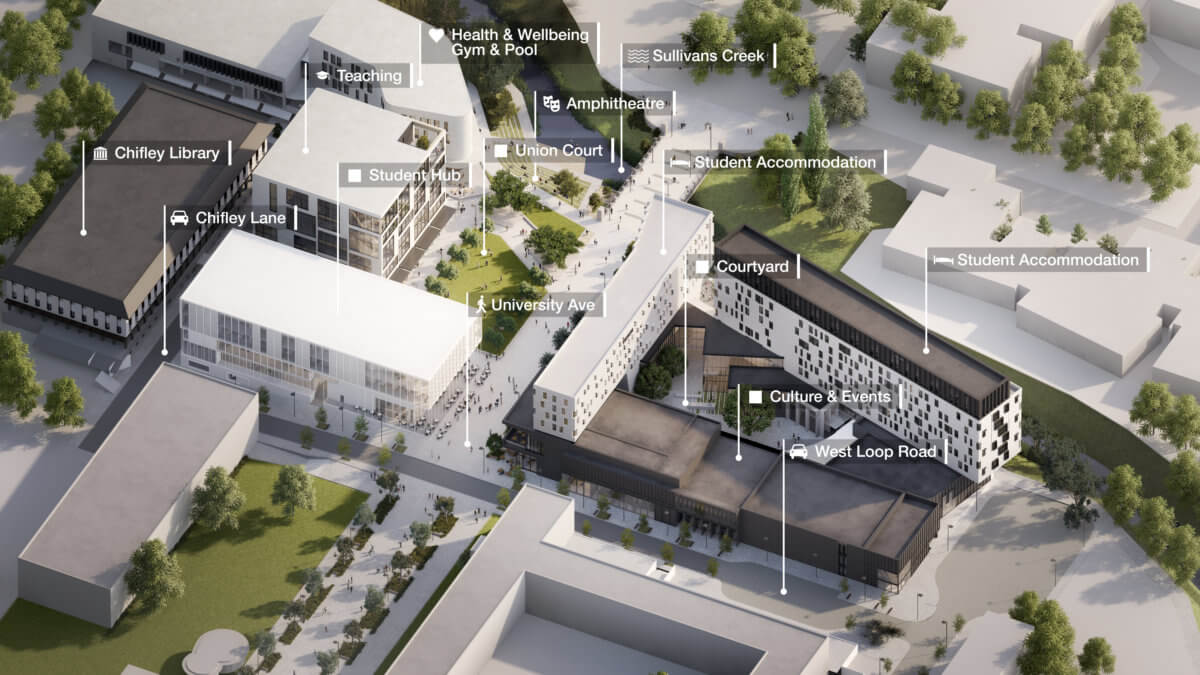 Despite taking on considerable damage from the recent Sullivan’s Creek flooding, the Kambri reconstruction process remains on track to finish by the beginning of 2019’s academic year — and it’ll come with a bookshop, deputy vice-chancellor Marnie Hughes-Warrington has announced.

“We’re in very advanced discussions with the bookshop, and we’re hoping to make an announcement soon.” Hughes-Warrington told Woroni on Thursday. “Can you imagine? No bookshop in Kambri? That would be terrible!”

It was announced earlier in the year that Union Court would be renamed Kambri, in a homage to the four Indigenous Australian nations that originally inhabited the land on which ANU is today.

And while Hughes-Warrington was tight-lipped about any further details on the bookshop, she assured that students would be a fan of the final store.

The Chancelry has decided on a bookshop as they start finalising which outlets will set up shop in the new Kambri.

Hughes-Warrington said that decisions were being significantly influenced by the desire to cater for a range of food tastes and price levels. She told Woroni of the questions that the retail selection committee ask themselves:

“Do we have a sufficient range of food, for different tastes, allergies and dietary requirements? And price points,” Hughes-Warrington added. “From the $6 to $20 range.”

The deputy vice-chancellor also confirmed that a supermarket would be one of those new outlets — however, it would not be a Coles, as earlier suggested. It will also not be full-sized.

And despite the recent flooding, construction was still on track to be completed by the beginning of the next academic year.

“We are roughly on track,” Hughes-Warrington said. “We’re still trying to get a final assessment on the damage from the flood. At this stage the indications are that we’re roughly on track and the precinct will be up and operating for the next academic year.”

An assessment on damage to the construction site is yet to be completed, but the deputy vice-chancellor remained optimistic.

Hughes-Warrington told Woroni that she would know of the final decision by early next week.

While 11 diggers, a crane generator and a truck were irreparably damaged by the floods, the university will not shoulder the replacement costs: instead, construction company Lendlease (and their insurers) will.

Special emphasis has been placed on ensuring that Kambri will not suffer from flooding damage. A weir, which regulates water flow, will be built along the shore of Sullivan’s Creek. The large, outdoor amphitheatre which features prominently in preliminary Kambri designs has been built with the expectation that it will experience some flooding.

Hughes-Warrington further suggested that the worst of the noise disruption was behind us.

“You’ll hear the clinking of the scaffolding, and the pouring of the concrete,” Hughes-Warrington said of the next stages of construction. “And you know, the occasional bit of chatter from all the workers.”

Up to 600 workers are expected to be working on the site by July this year, as the university attempts to push construction progress along.

Students should expect to see the scaffolds of new buildings appear within the next couple of months.

The Environmental Collective convened a forum today, 24 April, to discuss the draft booking fees policy, which were revealed by Woroni earlier this month.