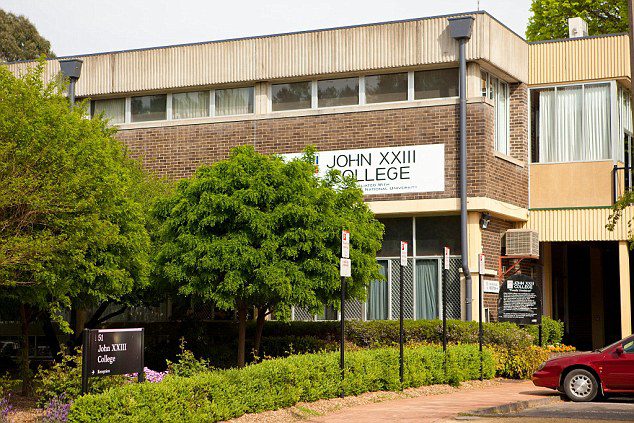 John College XXIII has been recognised for its enforcement of anti-harassment policies that have been adapted in the last few years. But in the light of stigmatisation that surrounds Johns, Woroni interviewed the Head of Hall, Jeff Johnson.

Johnson said that the College was working to change the impression people hold of it.

‘There is no doubt that we are trying to change the image of the College and I wouldn’t say that we are changing a lot of things, we are just saying to people – enjoy your time here, but if you make mistakes assume there will be consequences. If there has been change here in the last few years it is that there are consequences for actions,’ he said.

Johnson highlighted the current measures to tackle harassment within the College. The College uses the Consent Matters module, and runs education seminars to further students’ knowledge of consent. ‘In the area of consent, we’re having a number of sessions at night where students come and we can talk about sexual health,’ Johnson told Woroni.

‘There is no doubt that sexual assault is an unacceptable behaviour and we can’t tolerate it. What we then have to do is provide the victim with as much support as he or she needs to help them to deal with the situation they’ve got.

‘We’ve also got to deal with the alleged perpetrator in a fair and just way – but if they’ve crossed the line they have to deal with the consequences. The other thing that we do is we ask the victim what they want and what we can do to help – this guides us in how we react in a particular case.

The residential policy of the College outlines a commitment to integrity, respect and justice.

‘The Residents have the right to express and defend ideas, opinions and make appropriate life choices. The College recognises that all members of the College have the right to live, study and work in an environment free from discrimination, harassment, hazing and bullying,’ the policy reads.

Johnson told Woroni that the college utilises ‘suspension as an educational tool’ acting as a ‘cautionary slap on the wrist.’

One first-year John XIII College resident noted: ‘They’re really trying to change the reputation we have, because it’s nothing like it used to be, so much more tame and under control now.’

‘One of the key changes within Johns is our academic policy, We have a tier system of response in regards to academic failure – a new student would be on normal status, then they could move to at risk, then academic warning, probation, then lastly exclusion.

‘If a student has worked their way up through the stages and hasn’t taken the advice that has been given then we are excluding people from college on academic grounds’, Johnson said.

In regards to the expulsions and suspensions that occurred earlier in the year, Johnson said: ‘With the students we saw that they had crossed some lines, some had gone too far, others hadn’t gone as far, some were barely involved. Hence why we tried to be fair as possible, implementing three different penalties.

‘When we deal with our students we deal with it on a personal basis – we are not a bureaucratic organisation, we are people who set a standard. If people cross the line there will be a consequence, but that consequence will take in a lot of things.

In regards to underage drinking, Johnson said: ‘Underage drinking is not accepted, we do notify people who the underage drinkers are, they are told at the beginning of the year that they are not to drink whilst underage and there will be significant consequences if they do.

‘One of the things that we do here is accept that people make mistakes, so we initially provide counselling and advice, but if that is ignored we have to take disciplinary action,’ Johnson said.

In reference to the prejudice toward the College, Johnson said that ‘the stigmatisation aggravates a lot of students when they encounter it, especially when they are the ones that are here and they know what people think and say are especially wrong.

‘The only thing I’d like to ask people in regards to their perception of John XXIII is to be fair, and not necessarily believe everything you hear.’

The Impact of COVID-19 on Postgraduate Students

An Interview with Flint O’Neil: Main Tutor of Microeconomics 3

Woroni sat down with head tutor Flint O’Neil to discuss the course and its convenor, and his concerns about the public opinion of the course and the potential spread of false information.

The Beautiful Truth: An Interview with FABSOC’s President