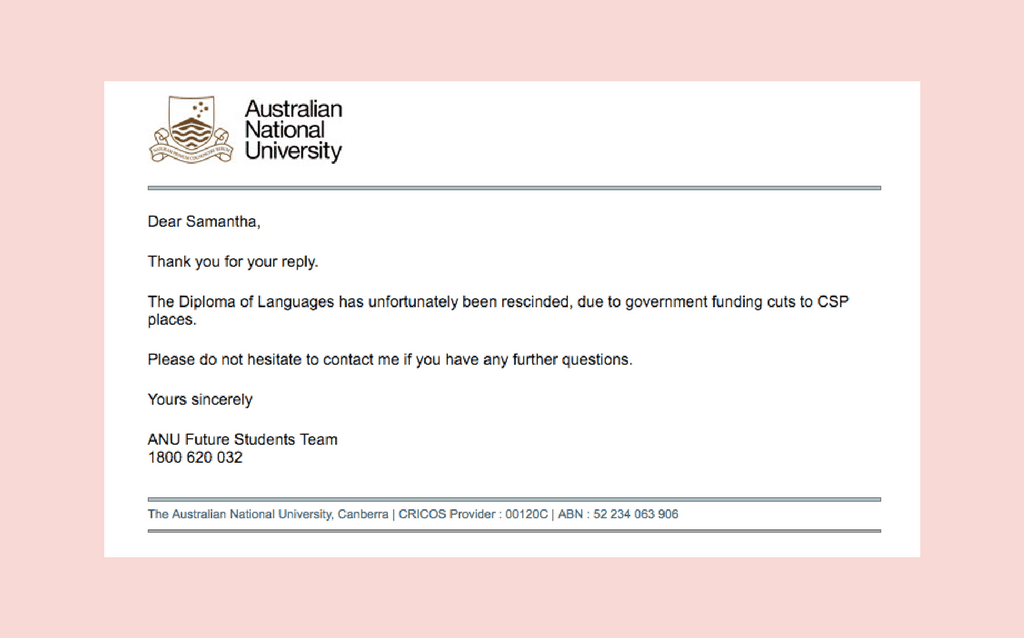 The ANU College of Arts and Social Sciences will no longer offer the Diploma of Languages, due to federal government funding cuts to diplomas which are not “careers-based”.

The Diploma of Languages was a one-year undergraduate degree offered to students enrolled in, or graduated from a bachelor’s degree.

Students had the option to major in Ancient Greek, Arabic, Chinese, French, German, Hindi, Indonesian, Italian, Japanese, Korean, Latin, Persian, Sanskrit, Spanish, Thai, Urdu or Vietnamese. In advertising material, the university claims that some of the languages cannot be studied at other Australian universities.In the 2017 QS World University Rankings, ANU was deemed the top Australian university for modern languages.

ANUSA education officer Harry Needham says that these cuts “are a blatant attack on higher education in pursuit of quick savings,” and that the loss of programs like the Diploma of Languages is the “inevitable consequence of such short-sighted policies”. He also expressed regret at how these changes have affected the studies of ANU students.

Students who applied for this diploma for the upcoming academic period have been notified of this change, and it appears as though they will not be allowed to begin their Diploma of Languages. The option to study a language as an elective, or within the Bachelor of Arts or Languages remains.

In the mid-year budget update, the government announced that it would cut funding to over 1,000 university places – including 533 language diplomas. The decision was part of a broader freeze on university funding. In comparison to 2017, Commonwealth-funded places at university will remain at the same level this year, despite an increase in the number of students who want to go to university. The government aims to cut back on the current amount of funding allocated to sub-bachelor degrees – which includes diplomas, advanced diplomas and associate degrees. Currently, they spend over $1 billion each year on the programs.

However, students at ANU will bear some of the burden of these cuts. For Samantha Carey, the diploma was the only way for her to learn a language – a skill she wanted under her belt in a competitive jobs market. “It seems every employment website or job application you look at preferences someone who is bilingual,” Carey, a third year international security studies and criminology student, told Woroni. “I went to a careers fair for the AFP and they really pushed learning another language as something that would set me apart from other candidates.” “I’m already doing a double degree and the diploma was my only way to include a language in my degree”.

“We are in ongoing discussions with the Department of Education about how the measures in the MYEFO (Mid-Year Economic and Fiscal Outlook) will impact on the program.”

The change comes after the federal government significantly reduced the funding that university diplomas received back in 2017. Hundreds of students were not given government loans because their diplomas were deemed ineligible, as part of a move to limit government backing to courses that were career-focussed. According to MP Karen Andrews, the Assistant Minister for Vocational Education and Skills, these changes aimed to promote courses that are of “a national priority, align with the industry needs, contribute to addressing skills shortages and lead to employment outcomes”.

In 2017, there were 57 students enrolled in the Diploma of Languages program.