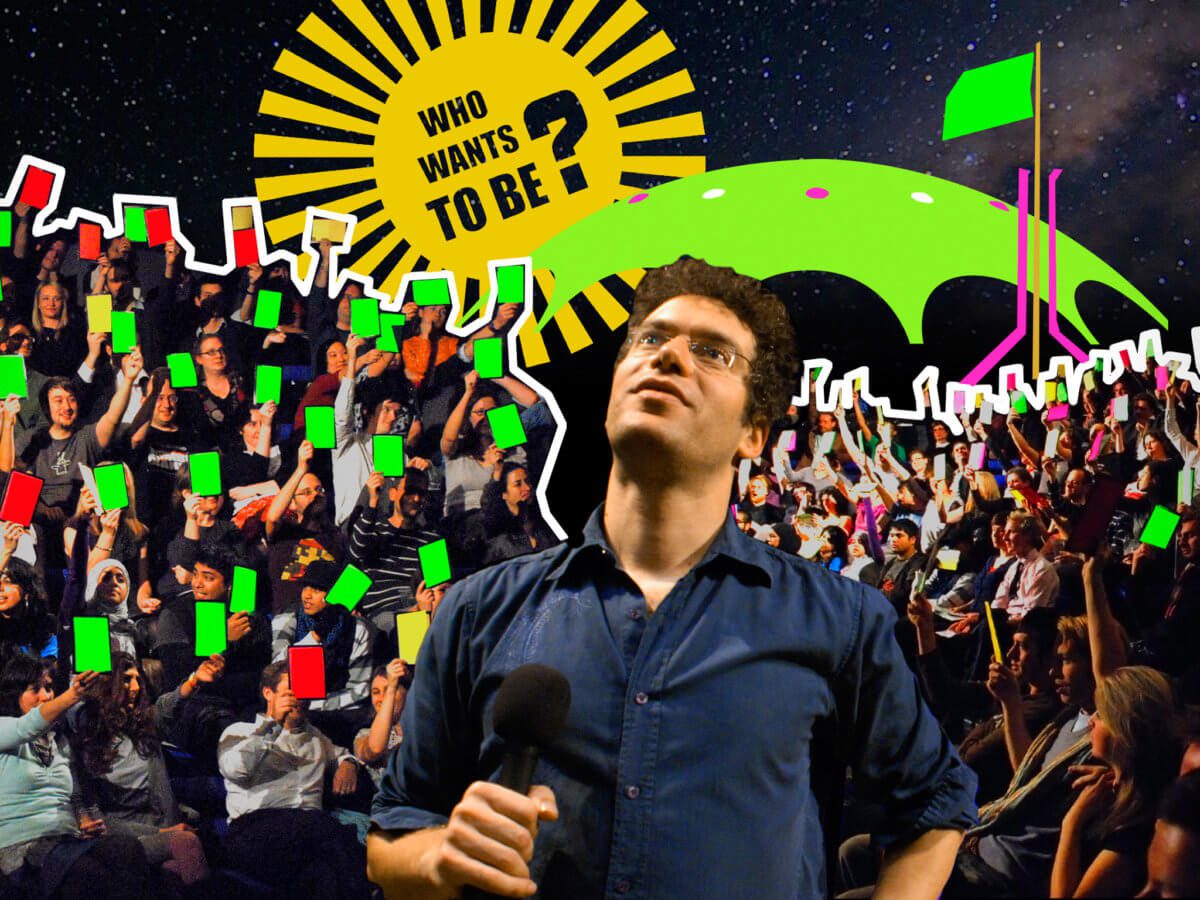 Who Wants to Be? at the Street Theatre

Who Wants to Be? is like a game show. There are bright visuals and a host flitting around the audience with a microphone. The show I went to started with participants brainstorming ideas for how we should spend $1,500. Anyone could introduce an idea, but they had to be prepared to back it up with details.

There was no real limit to how we spend this money. The possibilities included betting on the Melbourne Cup, searching for aliens, saving the Great Barrier Reef and sponsoring Ethiopian film maker Adanech Admassu.

Luckily, Who Wants to Be? employs a system of elimination where participants vote for each idea and then vote another four times to ascertain a winner. Before each vote, proponents of an idea get an opportunity to elaborate, and other participants can make suggestions.

This is how we arrived at the idea to use the money to gather fireworks stashed away in Canberran homes, set them all off on Black Mountain and, thereby, attract aliens.

We also raised other considerations during these discussions. Someone proposed that we consider which ideas would go ahead regardless of the extra funding. There was also a call for community participation in the implementation of the project, rather than just donating the money to an outside organisation. Someone else argued for effective altruism, proposing Against Malaria Foundation as the best recipient due to their number one ranking by GiveWell in terms of value for money.

During the intermission, representatives for different ideas sat at a table where the rest of the participants could go to discuss the projects, suggest alterations or volunteer their skills.

After this process, many of the suggestions become much more specific and achievable. We narrowed them down to three options:

We all held up our voting cards – folded pieces of cardboard with three different coloured sides, each corresponding to one of the options. The kids’ lunch won, and I happily added my name to the list of people who would commit to seeing the project through.

Of course, this was not everybody’s preference. However, I think the opportunity to discuss, alter and challenge ideas ultimately endowed the final decision with more legitimacy.

The People Speak ran three events at the Street Theatre as part of the Segue Festival, and Who Wants to Be? was the last. If you missed it, you can check out the many recordings of other events hosted by The People Speak on their website.