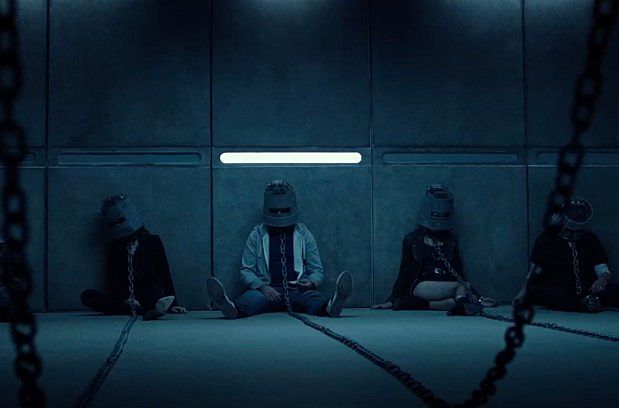 We All Jig-Saw That Coming

19.12.2017 by Alexandra Elgue
This review is powered by Dendy Cinemas Canberra
Image: Lionsgate

Well, I don’t know what I was expecting.

The eighth instalment of the Saw series, creatively titled ‘Jigsaw’, delivers pretty much as promised – if you ignore the previous film’s promise to be ‘the final chapter’. Given the recent trend of horror films exploring psychologically complex themes, such as in Get Out and Cabin in the Woods, you may have hoped that this revival of the Saw series would be deeper than its predecessors; sadly, but not surprisingly, it is not. The film is nostalgically simplistic: the only things about it that are deep are the characters’ wounds. It’s got nothing the franchise hasn’t shown before – sacrifices of blood, dingy ‘haunted-house’ sets, rusty traps and soothing tapes inviting you to ‘play a game’.

In Jigsaw, 10 years after the supposed death of the Jigsaw Killer, played by the now-iconic Tobin Bell, the traps continue. Five chosen victims must play along with Saw’s game in order to avoid being dragged towards certain death while a group of morally ambiguous police officers race against the clock to free them. If that sounds somewhat familiar to you, it’s because it is the same exact plot as the previous films. Intercut with a few twists, none of which are particularly memorable, the story is pretty much a thinly veiled excuse for the torture-porn the film promises.

So, is it any good? Well, the characters are as one-dimensional as they come, and you would be hard-pressed to find someone redeemable among them. The gore is graphic, gratuitous and definitely not everybody’s cup of tea. Although tension is maintained throughout the film, the final payoff is disappointingly confusing and there are more than enough moments to make you roll your eyes.

If you liked the previous movies, you will probably enjoy this latest one. Yeah, it’s forgettable, but if your guilty pleasure is torture flicks with all style and no substance, this will certainly satisfy. That said, if you were hoping the franchise was going to branch out into something more intelligent, then maybe give Jigsaw a miss.

Jigsaw will be available to rent or buy in Australia from 18 February 2018.