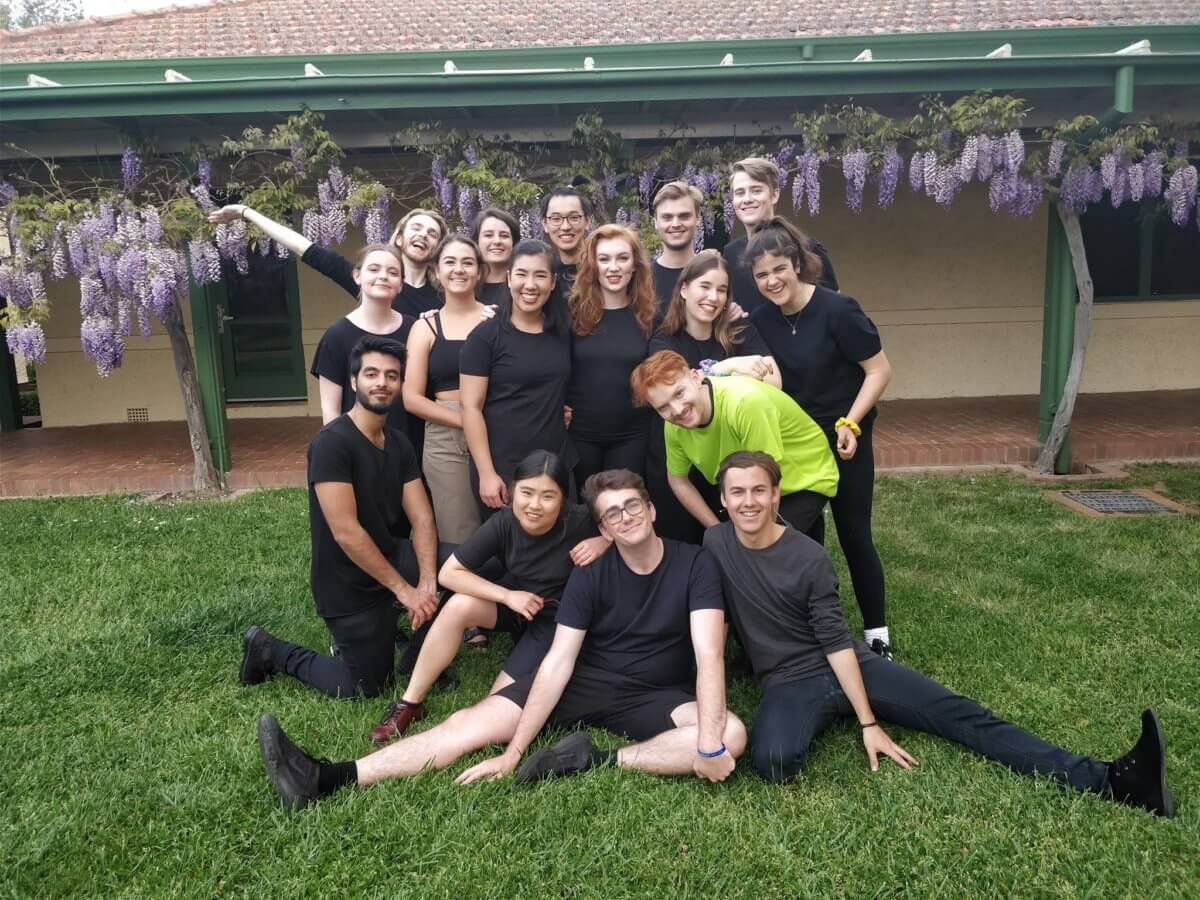 Arts Revue is a staple of the ANU theatre season, and this year’s show made me appreciate that fact. Directors Cameron Allan and Eldon Huang delivered a funny and occasionally risqué performance that made you feel as if you are laughing with the cast rather than at them.

It is clear that proper casting was a priority, primarily demonstrated by the meddling kids of the Mystery Machine. Although it should be noted that Ella Serhan-Sharp plays an uncomfortably realistic Islamophobic bogan. The gang consists of Lewis Laverty-Wilson (Shaggy), Elvis Gleeson (Scooby), Claire Holland (Daphne), Rhys Dobson (Fred), and Sophia Murray-Walker (Velma), who are each fantastic in their respective roles and had a team chemistry that shows on stage.

The show’s *thrilling* opener tells us about an ANU murder mystery that Scooby Doo and the gang plan to solve. The cast’s singing is great, their energy is up, and the choreography is clean. On occasion, the dancers’ heavy feet make it difficult to hear the lyrics, but the point is made all-the-same: Something Crooked This Way Comes.

The cast know how to play to their strengths. Trust Cameron Allan to complain about being typecast in every production since year eight, and then to typecast himself. In this show, he plays the wacky, eccentric and v i b r a n t sorting scarf in a skit which sees prospective ANU students sorted into residential halls according to their stereotypes. The skit’s pivot into a bootleg of You’re a Wizard Harry was a refreshing meme reference, a move that Arts Revue uses more than once to good effect.

In fact, meme references (shout-out to Lewis Laverty-Wilson fulfilling his dream of saying ‘friggin moron’ on stage) are not the only way that Arts Revue engages with continuity. So often in revues, the theme of the show will be used maybe once as the premise for a skit. This is not the case for Arts Revue 2017. Arts Revue sees Scooby and the gang on stage frequently to push the show forward. This rarity among ANU revues shows a feat of writing and directorial ambition that certainly pays off. For the audience, it gives us something to invest ourselves in for the duration of the show and keeps us wondering when Scooby and the gang will pop up next. Also making repeated appearances are the – controversially named – ANU (Kn)Observers: Tichael Murvey (actor: Cameron Allan) and Cliza Eroft (actress: Fiona Xu), who show up regularly in unwanted places to get the scoop.

Some skits end unexpectedly, and others have no discernible end. Instead, these skits trail into the next one without any visual indication that it is, indeed, a new skit. This is compensated for by an incredibly well-named skit-list in the program, which keeps you in-the-know. But, this nonetheless makes it difficult – as an audience – to reward a good skit with deserved applause.

Many of the skits focus on the trials and tribulations that come with being a student at the ANU. This makes viewing the production an intimately familiar and relatable experience for students in the audience. I would like to see more non-student humour, but the skits that we do see are on-point. Moanus Island is a chilling tale of climate-change refugee – Julia Beard – being rejected and re-settled by Peter Dutton (Elvis Gleeson), while the sorting hat skit makes you relive those haunting first few weeks at college.

Arts Revue 2017 is a spectacularly musical show. It is brave to parody either Dear Evan Hanson, Hamilton, or Kendrick Lamar on their own. But, Arts Revue does all three and does them well. The lyricism, across the board, is of a very high standard with the standouts being Shapes, Not You and Thirsty at Mr Wolf, which left me chuckling long after I left the theatre.

It is the small things that make Arts Revue so worth watching. Quips like ‘Tuckwell: empowering the already empowered’, someone getting stabbed for explaining CHL, Rhys Dobson playing a SAlt advocate, and Ria Pflaum’s facial expressions make for a great experience of fun, student theatre.

Get yourself along to Arts Revue 2017; I promise that you’ll have a good time.

ANU Arts Revue 2017: The Ghost of Manning Clark!, is on at the C Block Theatre at the Gorman Arts Centre until Saturday 14 October.