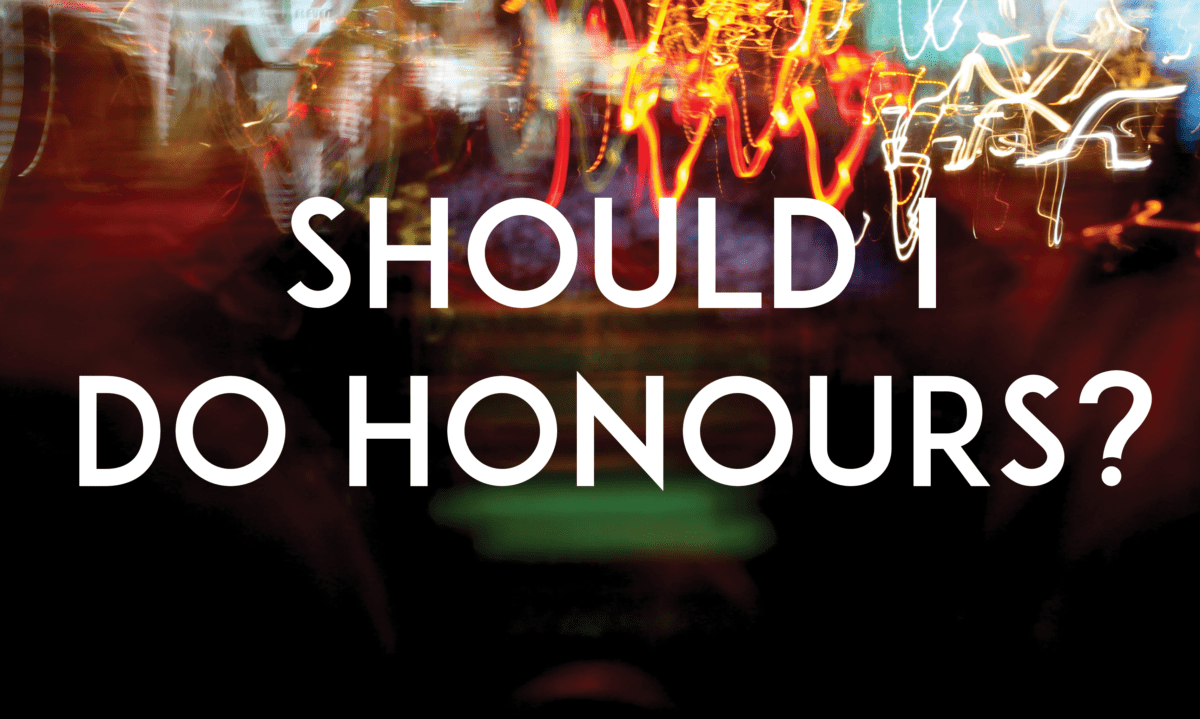 If you’re nearing the end of your undergraduate degree, you might be asking yourself: should I do an honours year? As it got towards the sticky end of my third year, I was asking myself the same question.

There are a tonne of upsides to doing honours: you get free reign with a topic of your choice all year, it puts off having to enter the dreaded real world, and it’s an added bonus to your resume. But there are other things to consider as well. Honours is hard. It seems like it’s going fine, and then all of a sudden you have to have a chapter of your thesis to your supervisor. There are difficulties.

For me, I was heading towards the second semester of my third year. I was set to graduate at the end of December and… well, the plans were a little sketchy from then on, but I was looking at moving home and Figuring It Out. But, as I considered moving home for an indefinite period of time, and entering the Real World as a fully-fledged Adult with a Degree,

I wasn’t looking forward to it. My friends were all pursuing four-year degrees, and I was polishing
off the final third year of mine. There were jokes to have and mistakes to be made in the next year that I would miss out on. I won’t lie to you and say that that didn’t play a huge part in my decision making.

I didn’t know what I wanted to do in any clear sense, all I had was a vague idea of what I didn’t want. Which basically was missing out on a tonne of stuff, and to set off at a mere 20 years of age into the professional world. I wanted to put it all off just that little bit longer, and honours let me do that.

Now, I was lucky, which meant I had the GPA to be accepted into honours even though it wasn’t something I’d really thought about. I talked it over with my parents, spoke with one of my favourite professors about whether it’d be smarter to pursue a masters instead, and ended up with a freshly minted application to my honours year, all within the space of a month or two. I had a sparkling, vague idea of a thesis topic, a supervisor who’d signed off on me, and I waited with bated breath for my acceptance.

And honestly, this may end up just being an ad for honours, because so far I’m loving it. I get on with my supervisor, I’m writing a 20,000-word thesis on a topic I’m excited about, an experience which is so new and refreshing that I don’t know what to do with myself. I’ve written essays I’ve enjoyed before: I chose my entire degree based on my interests rather than more practical choices, and I enjoyed my undergrad so much that I did more courses than were necessary to complete my majors. But for my thesis, I got to choose entirely what I’m interested in: I chose the era, the focus, the texts, everything. It means I’ve dived in headfirst, and have written the first chapter already.

Not to mention that I’ve made friends in my honours classes that I get on with and understand. There’s
a bonding moment when you realise that you’re all facing the same trials and tribulations: all of my classes are spent with the same group of people, and we all share the same interests, since we’re all doing honours in the same thing.

Of course, honours isn’t for everyone: if you’re ready to leave and you’re done with your degree, if you know what you’re doing and you’re excited about it, then there’s no need. If you’re ready, then fly the nest, and best luck with it all.

If you’re thinking about it though, then it can be hard to tell if honours is the right decision for you. That said, it opens more doors into whatever you want to go into, and honestly, what can it hurt? At worst, you spend an extra year doing something you maybe shouldn’t have, end up with an “(Hons)” attached to the end of your name/degree, and put off real decision-making a while longer if that’s what you’re looking for. It also lets you think about post-graduate programs and qualifies you for any overseas programs you like.

And if it goes well? You make and cement friends, spend a year chasing your passions, get an added bonus on your resume, and may end up having one of the best years of your degree.

I’m only a quarter of the way through, so check back in with me when the stress of September thesis polishing hits, but so far, things aren’t looking too bad at all.

In Limbo: Being New in Semester Two