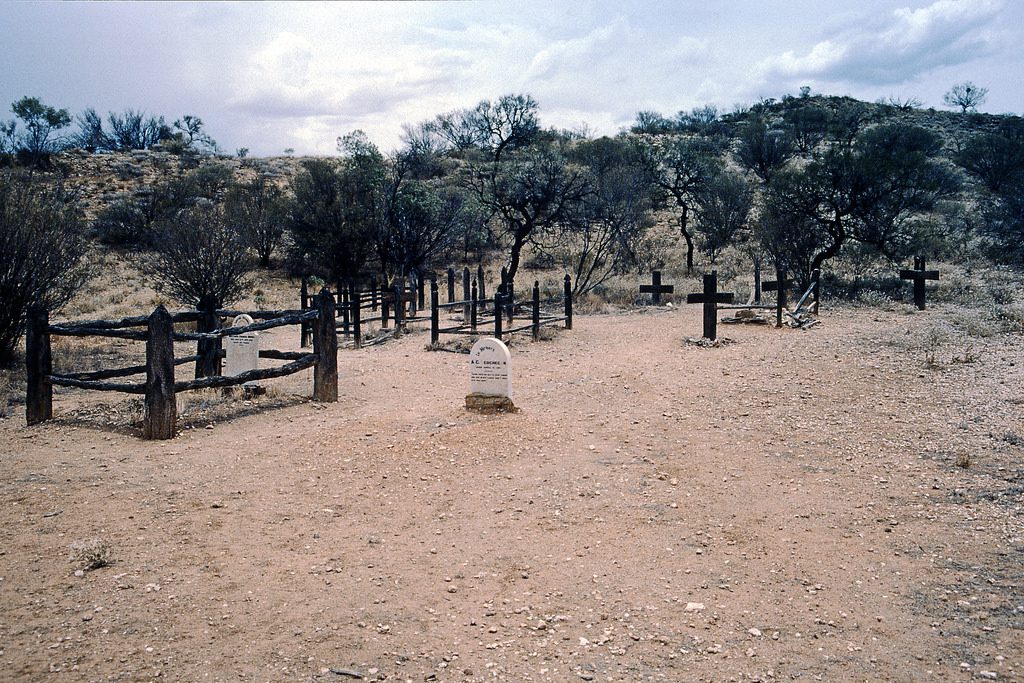 Every Sunday of her childhood, in the northern New South Wales town of Moree, Noelie went to the graveyard. It was her grandmother who insisted on the weekly ritual, adamant that the young girl see the names and resting places of their departed relatives.

In the 1960s, Moree enshrined into law what much of Australia took for granted—the exclusion of Aboriginal people from public places such as swimming pools, cinemas, council buildings and coffee shops. Segregation of this kind was enforced throughout life and, finally, in death. Today 220 people are buried in the Aboriginal section of the Moree Cemetery. Over half of them are children. Many others are ex-servicemen, who lost their lives alongside white brothers-in-arms in two World Wars.

When Noelie returned to the cemetery in 1983, the relatives she’d visited weekly with her grandmother were lost—their names sunk beneath grass, weathered off, washed away by decades of neglect.

“It was a total panic,” she says of that visit. “I couldn’t find anyone.” Noeline Briggs-Smith, or Aunty Noelie, as she is better known, has spent the past 30 years tirelessly conducting the graves’ restoration.

At the entrance to the cemetery, there is a sign in the language of the local Gamilaraay (Kamilaroi) nation. It reads, Ngindi baabili tubbiabri — They sleep in a place of quiet. The words are not meaningless to me.

At least 250 languages were spoken in Australia at the time of colonization. Today, roughly 13 of those are still spoken by children. Gamilaraay is not one of even these few. It has no fluent speakers. It is listed by various sources as ‘endangered’ or ‘extinct’. In the towns and villages inside Gamilaraay land, including Moree, Tamworth, Gunnedah and Walgett, it has survived — in various forms and fragments — both the massacres of Aboriginal people by white settlers and the language purge that occurred on Aboriginal missions. It is treasured by elders and teachers, shared earnestly —sometimes desperately — with a new generation of children, and all those willing to listen.

Extensive academic revival efforts in recent decades have amplified the work undertaken by Gamilaraay people to maintain a hold on their linguistic heritage. Today, there are teaching resources. There is a dictionary. It is a subject at ANU. Its lineage has been lost, and found again.

One of the central people behind this revival effort is our guide in Gamilaraay country, ANU’s Dr John Giacon. Moving to Walgett in 1994, he worked closely with Uncle Ted Fields, Aunty Fay Green and many other Yuwaalaraay and Gamilaraay people to compile the 2000+ word dictionary that now exists. The Gamilaraay and Yuwaalaraay communities have supported John to teach language at Walgett TAFE, Tamworth TAFE, in language programs on country, and now at ANU.

Our class is lucky enough to take part in a trip crossing the diverse homeland of the language. Far from my native strip of rainy coastland, the land here is red, parched, and ruled by dhinawan —emus. Elsewhere it is soft, grey, and cracked like the crust of a huge clay cake. Galvanized burr turns to dust underfoot.

On the long journey through the country, I pester John endlessly about the names of plants and animals in ‘language’: gidjiirraraay, yarraan, murru manamanaa—apostle bird, river red gum, dragonfly. As he reels them off I tap them into my phone, somehow afraid they’ll be lost to the wind. It’s hard not to approach the language and its revival with a sense of urgency and wonder. In Emma Jones’s poem ‘Zoos for the Dead’, her line about the last native speaker of a Western Australian language (incredibly, and tragically, a talking parrot) is understatedly apt:

“His language is important.”

There is no doubt that Aboriginal languages are important. The 2012 parliamentary inquiry into language in Indigenous communities noted the devastation that communities experience when a language is lost. The language of a place is intertwined with its features. In the words of the Arrernte elder Amelia Turner, “Words are given to us by the land… the land needs words.” Further abroad, a preliminary investigation by Hallett, Chandler and Lalonde suggests that knowledge of the language of one’s ancestors among Aboriginal youth may be linked to a reduction in suicide. At the 180th anniversary of the Myall Creek Massacre, a descendent of the survivors, Keith Munro, having completed his introduction in Gamilaraay solemnly told the crowd: “It was important for me to be able to say that in language… in lingo.” Maintaining this connection to past is vital, and healing.

Arriving first in Walgett, we meet with Aunty Virginia, of the Dharriwaa Elders Group, who calls my curly hair dhirrabuu —‘flash’. She says she’s not worried about the language dying out. The problem, as she sees it, is that where young people do speak the language, they aren’t speaking it right.

“No one here has been taught to teach properly. I know — this feeling in my heart — it’s not being done properly,” she explains. “We need a linguist.”

Near the Queensland border, we pass Angledool, where Aboriginal activist Uncle Ted Fields grew up as a young child. At the age of six, he and the rest of his Yuwaalaraay community were forcibly removed, loaded into trucks and taken to Brewarrina Mission.

“That was pretty much the end of language,” John says of the Aboriginal missions. Families would be taken from communities where everyone could be understood, to a mission where their language was just one of a dozen. Aboriginal kids were taught that their language was ‘primitive’. Parents stopped speaking to children in their native tongue for fear the children would be punished, or worse, taken from them.

Outside Collarenebri we visit another, very different, Aboriginal cemetery. Rows and rows of graves have been adorned with cracked glass chips, a tradition kept up since before World War I. In a moment of country town serendipity, the cemetery’s keeper turns up just as we are leaving. When we tell him we are students and teachers of Gamilaraay, he turns his head down.

“Ah, good luck with all that stuff,” he chuckles. “I could never get my tongue around it.” We hear those words repeated almost verbatim several times throughout our journey—from Gamilaraay people who seem ashamed, perhaps, that they are not familiar with the language, or more so that a group of non-Aboriginal people is.

In classrooms around Gamilaraay country, a similar issue has emerged. Enthusiastic staff take the lead in teaching the local language with posters, picture books, games, songs and dances. The language programs signal a new era of revival and hope. But, as the teachers tell us, there is a problem. The non-Aboriginal kids almost always exceed the Aboriginal kids academically. In the classroom environment, where Aboriginal children are already statistically at a disadvantage, such an outcome is likely to cause dejection, a sense of cultural detachment, and humiliation.

Learning Gamilaraay isn’t like learning many of the languages that English-speakers are drawn to. In English, as in most European languages, only pronouns display case variation—the difference between ‘he’ and ‘him’. In Gamilaraay, nouns and adjectives do too, and can take on many more forms than just those two. Its word order is nearly the reverse of English. It has no prepositions. Then there are the infamous trilled rr and initial ng sounds, which stump most English-natives alike.

As we travel, the consequences of these barriers become apparent—to one of our group members more than the others. Wherever we encounter written Gamilaraay, John can be heard mumbling something about word order, verb tense, or suffixes. His objections to the grammar are so frequent that it turns into a running joke.

“Just let them do their language the way they want!” the others cry in protest.

I understand his frustration. Knowing the specifics of the language is his job. He and others have spent decades studying all the texts and tape recordings available in an attempt to be able to say, as definitively as possible, “This is the way Gamilaraay was spoken.” While mistakes in English usage are a drop in the ocean, with a language as scarcely spoken as Gamilaraay any variations in usage could cause sweeping changes across its comparatively microscopic community of speakers. This recalls the fears of those like Aunty Virginia who worry that the original language will be lost, subservient to a newer form that increasingly mimics English.

On the other hand, strict adherence to the grammar may alienate students of the language where they are needed most. Where is the sense in holding fast to rules that may be flexible among the very people who keep the language alive beyond textbooks? How does this help those who have tried, and failed, to learn the language of their ancestors, stumped by its apparent complexity?

An example of this struggle lies in the words for ‘hello’ and ‘goodbye’—‘yaama’ and ‘yaluu’. They are perhaps the most widely known words in the language. In streets and shops throughout Gamilaraay country they roll off the tongue, a strong example of how language can spread naturally, organically — and they are neologisms. Traditional Gamilaraay did not have words for ‘hello’ or ‘goodbye’. But it is hard for English-speakers to comprehend a language without these crucial interjections of social ritual, and so they have emerged. One could argue that if the language is to flourish as a practicable alternative to English, then it must be accessible to English-speakers.

At our final stop, over a quiet hotel dinner in Coonabarabran, Gamilaraay teacher Aunty Suellyn Tighe doesn’t take kindly to neologisms like ‘yaluu’, which originally just meant ‘again’. But she acknowledges that the situation is fraught.

“Who makes words up?” she says. “Who gets veto?” In New Zealand, there is a Māori Language Commission to help direct how their language adapts to changing times. But in Australia, she says, “Even the name of the language is a big controversy.”

No one we meet, however, doubts that teaching Gamilaraay in schools is a step in the right direction. And Suellyn’s approach of teaching kids phrases for everyday life is friendly, accessible, and optimistic. She provides kids with phrases that they are bound use in everyday life.

“Every kid, at some point in their life, has asked ‘Are we there yet?’ So I teach them that.” Meanwhile, she teaches grammar by drawing direct comparisons to English. “I’ll just say, this suffix is like ‘-ed’ in English, this is your ‘-ed’.”

As we exit into the freezing country air, a patron of the bar perks up at the sight of the teacher.

“Because they’re gone,” her grandmother would reply. “But their spirits are still here.”

“Now I understand what she meant,” Noelie says.

An Afternoon with Two Friends