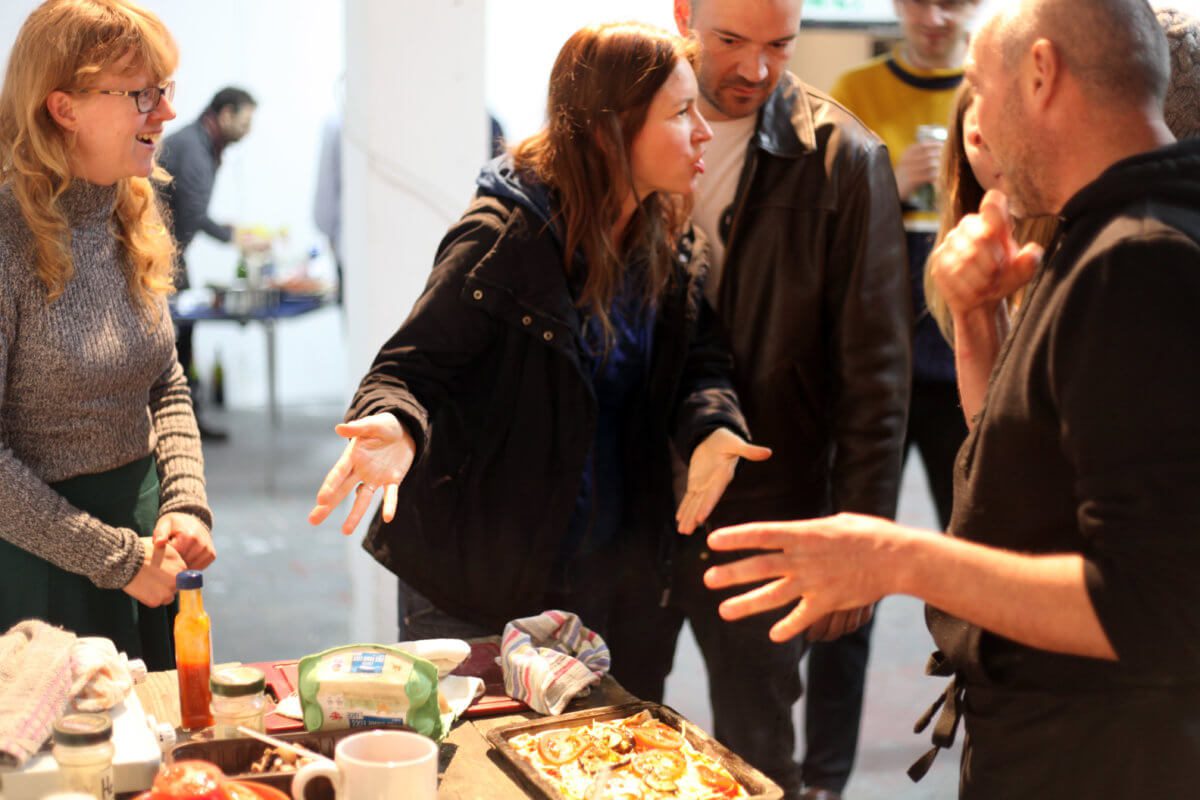 Segue Festival: The Slice is Nice

In late-August, warm nights are a distant memory for Canberrans. Thermals, layers and beanies during the day means that by the evenings, few locals are willing to brave the chill and leave their homes.

Luckily there are events like The Slice Is Right to warm us up. The premise is straightforward: each table makes three pizzas. The method of construction of each pizza will be made according to a kind of political system. The idea behind the event? To get us seriously thinking about different political systems and their pros and cons in a setting which is fun and engaging.

When we sat down at our table we weren’t really sure what to expect, and neither were our team members (a common reason for attending was ‘I saw the word pizza on the event promo’), but we were soon launched into the game.

Mikey Weinkove led the evening with a contagious sense of fun and enthusiasm and guided us through the first round. One member from the table picks a political system card, the table makes the pizza following instructions on the card. Making the pizza involved six stations: base, sauce, cheese, meat, vegetables, extras.

Sounds simple? Not quite. Although some cards (‘Autocratic: The shortest player makes all the decisions’) streamlined the pizza-making process, other cards (‘Dynamic Consensus: All players must agree on each ingredient’) made the process longer. Our table got very hungry when we drew the Bureaucracy card which involved submitting double-sided forms not unlike the ACT grant forms which were then passed on to a panel of experts to review before they decided on the pizza which was to be made. The winner? The proposal which had us singing as a group during the entire pizza-creating and pizza-consuming process.

The pizza, wine and comfortable atmosphere of the Street Theatre venue was accompanied by a room full of friendly people who were there to have fun and make new friends. What made the event so exciting was that the players really got into the game. Our table, upon drawing the Colonial card (the Autocratic leader decides the ingredients which will go on the pizza, a slice of the pizza is delivered to the leader) became fed up when the leader declared her slice of pizza be adorned with gourmet ingredients, whilst ours be ‘economically’ sprinkled with pepperoni, and announced a revolution.

At the end of the night, we were asked to consider what would a utopian pizza look like. One audience member used this moment to shockingly confess she doesn’t actually like pizza. Others in the room seemed quite set on self-determination of toppings, which, although not necessarily a step towards a new, utopian political system, might be a more radical acceptance of those who choose to include pineapple on their pizza.

Bring: That first date you’ve scored and a sense of enthusiasm.