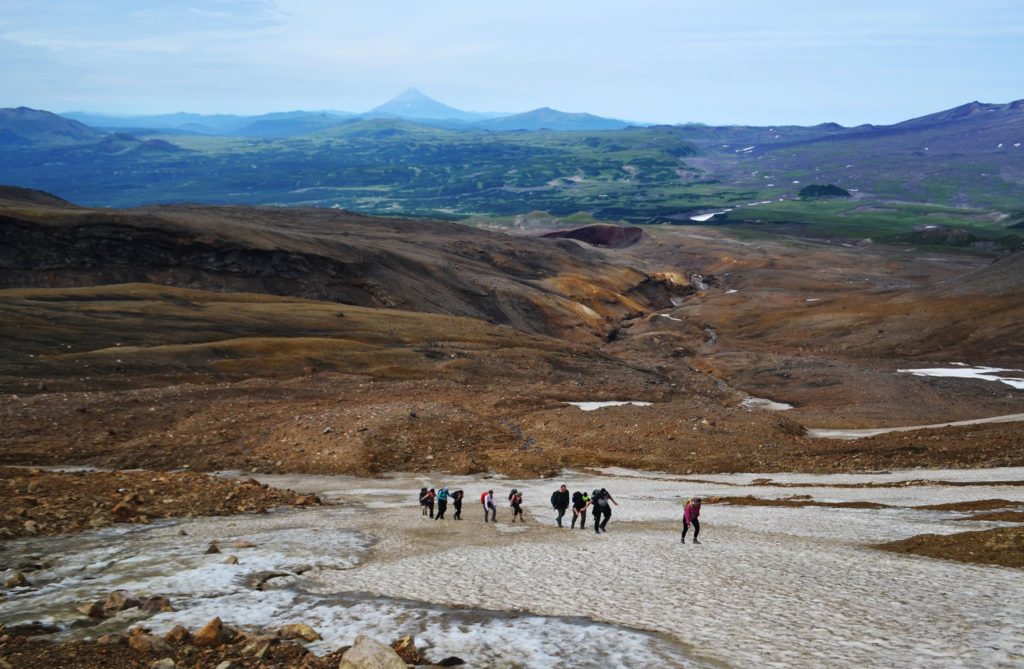 The Rocky Road to World Peace: A Field School in Kamchatka, Russia

Globalisation at its best: seven Russians, two Australians (both from ANU) one German, six Americans and two Canadians, picking blueberries and wild mushrooms, and sharing a passion for geology. We’ve all congregated around an outcrop to see fiamme (welded lapilli) in the welded ignimbrites of a caldera forming event from the nearby Gorely volcano, in the volcanic wilds of the Kamchatka Peninsula in Russia’s far East.

In the evenings, amidst recovery (and perhaps delusion) from a day of breathing in eye-watering fumarolic gases, discussion of the astounding geology of Kamchatka ensues. A definitely not politically correct game of charades depicting Kim Jong-un and Putin is followed by an avid debate surrounding the rationale of Russian homophobia. The night ends with an identification guide to the Bloods and the Crips of LA.

Tempered with hearty carbs, plenty of chocolate and a universal sense of humour, friendships were forged amidst a mutual sharing of culture and curiosity of geological mysteries of the Pacific Northwest.

This far-off place – the fiery arm of Russia – extends down and dissipates into the Kurils. Shaped like the Leviathan’s pectoral fin, Kamchatka lies to the west of Alaska and is isolated from the rest of the world, with no roads leading in or out. The administrative centre is Petropavlovsk Kamchatsky which has a surprisingly-unsurprising Asian influence melded with the requisite mass of Soviet communal apartment blocks. A further affront to an Australian’s capitalist heritage is an FSB permit for foreigners to stay at a Russian Academy of Sciences (Far East Branch) building opposite a military base, along with the ongoing regimen of visa registration.

This was the setting for 2016 International Volcanology Field School at the Mutnovsky Volcano, a collaboration between the University of Alaska Fairbanks and the Institute of Volcanology and Seismology Petropavlovsk-Kamchatsky. A two-week excuse to ignore the political echoes of the Cold War and celebrate the inner workings of the earth.

We embarked on a study of the Mutnovsky Volcano, a composite volcano in Southern Kamchatka in tandem with the neighbouring Gorely Volcano. Both were abstract, nascent landscapes: backdrops to the verdure of the Kamchatkan summer. Daily lectures were held in a volcanologist’s hut (repairs ongoing) on the base of the Mutnovsky volcano, interrupted by the occasional yell and sighting of ‘mishka.’ These Kamchatkan bears were a threat more immediate and infinitely more dangerous than the neighbouring volcano. Glacier hikes were undertaken sans crampons, sans ropes; a team of eighteen led by nothing more than the unbreakable will of a Russian volcanologist determined to gather gypsum crystals from the lip of an active caldera.

The aim: to learn about volcanic processes using some of the best examples in the world – volcanism, tectonics, and North Pacific subduction phenomena. Underlying all this, however, was the newfound appreciation of the universality of nature.

Our academic pursuit, geology, is often tied closely to a malicious exploitation of the earth, indiscriminately destroying the nourishing womb from which humanity feeds. From an environmentalist’s point of view, the geologists’ professional existence is justified and limited only in meeting the resource demands of human society. By latching onto human curiosity and detaching ourselves from the capitalist machine, the study of rocks study had no link to commercial exploitation. It was replaced with the fulfilment of a childlike sense of wonder akin to that which inspires environmental preservation.

What compels people to preserve the environment and why are we interested in things like sustainability and environmentalism? One can quickly run a list of reasons why it is economically, socially and scientifically beneficial to do preserve the environment. But experiences in the wilderness affords the intimacy to turn an interest into a passion. It is experiences like this Field School that inspires a fervour to protect the places that both strike and bewilder us.

An understanding of the explosive drama unfolding in these volcanoes and rocks over thousands of years had the effect of momentarily transcending cultural and politically prejudicial rifts. Perhaps the Iron Curtain could have been opened not through violent political agenda, but through the unification of persons enthused by collecting ultramafic olivine samples from outcrops in the Kamchatkan wilderness. Understanding and experiencing a fragile and untouched wilderness, marred only by the decaying remains of an old Soviet geothermal power plant, reminds us of why it is important to protect the environment for present and future generations. Indeed, this nexus between scientific and humanitarian preservation saw the 1996 inscription of the Volcanoes of Kamchatka on the UNESCO World Heritage List.

In these most rocky and often explosive geopolitical times, perhaps the solution to world unification itself lies in what can be discerned as universal. That is, a renewed appreciation and understanding for the world around whether it be through sciences, people, or mere rocks.