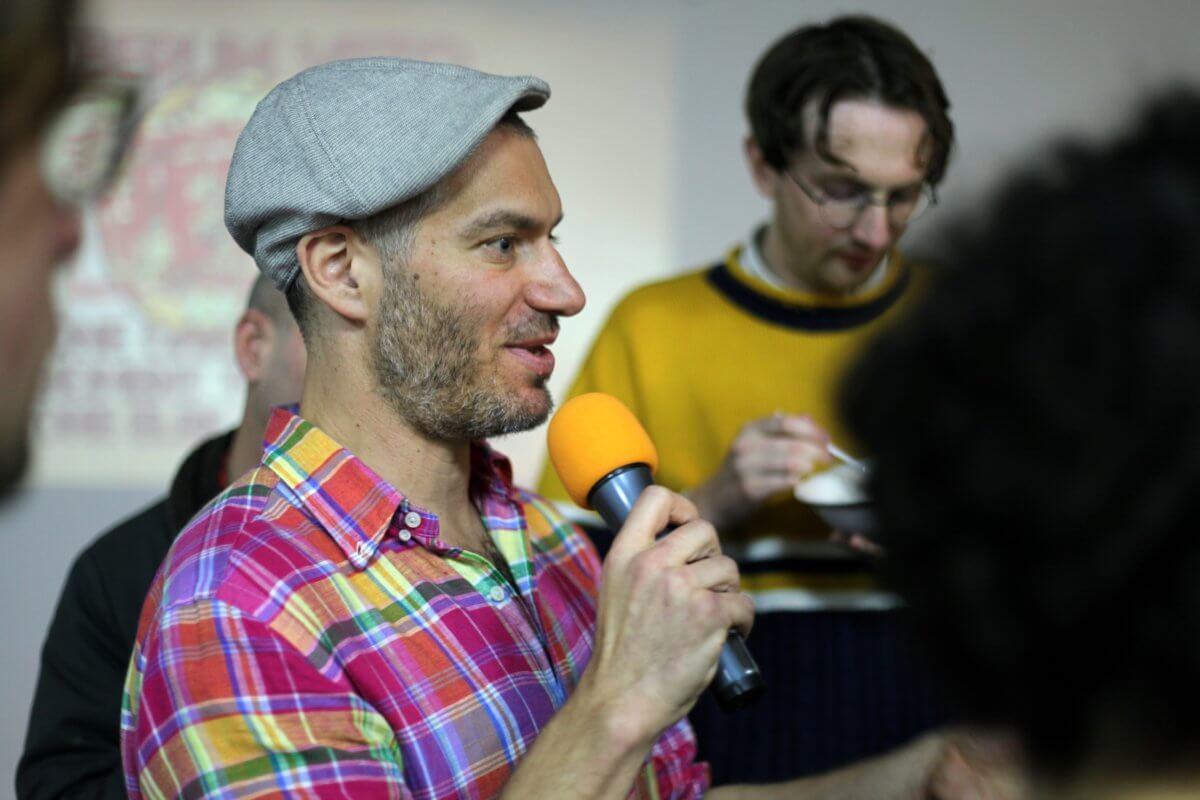 The People Speak at the Street Theatre

What do you want to talk about? That’s the first question at a Talkaoke. Mikey Weinkove explains that the pop-up talk shows he hosts may start with a theme (for example, what’s in the news) but the discussions must have an open agenda.

Talkaokes are just one of the projects that The People Speak run. Other projects include The People Film, Unlecture and One Night Grandstand. However, the same ethos applies to all these projects: getting people (often strangers) to speak and listen to each other.

The idea of an open agenda underlay The People Speak’s event at The Street Theatre showing this week. Mikey starts with a slideshow explaining Talkaokes and other projects that The People Speak run. However, the presentation quickly becomes a discussion guided largely by the audience.

Someone asks about how the local governments, theatres, museums and other institutions that commission Talkaokes feel about keeping the agendas open. Don’t these institutions have their own criteria that they think the Talkaoke should address? They’re just one more person at the table, Mikey stresses. If they have something that they think is worth addressing, they need to bring it to the table.

This brings us to the Talkaoke table itself. It’s custom made, altered over the years per the rigorous testing of different techniques and designs. It’s doughnut shape means that everyone who comes to speak is on the same side. The host sits in the middle, slightly lower than everyone else.

Mikey talks about the challenges of getting people with different backgrounds and different personalities to listen to each other. There are two rules: no fighting and no singing. If someone is dominating the conversation, one of the best ways to get them to shut up is to encourage them.

Is it difficult to get people to speak to you when you set up the Talkaoke table on the street? Yes, at first, Mikey says. But, once you have enough people, others are drawn in by human magnetism.

He shows us pictures of Sikhs crowded around the table in Birmingham; Muslims and non-Muslims in conversation after the Manchester bombings; speaking to young, white men in Lancashire about Pakistani immigrants. He tells us that one of the hardest Talkaokes he ever hosted was when all the participants were environmental activists, each blinkered by their individual project.

Over the years, The People Speak have developed techniques to foster an open conversation. These are all available on their website, and The People Speak encourage other groups to try them out.

The People Speak are at the Street Theatre this week as part of the Segue Festival. On Wednesday, 30 August, they’ll be running The Slice is Right. Participants will be divided into groups and given a political system. Within this system, they must design the best pizza they can.

On Saturday, 2 September, Who Wants to Be? will challenge participants to collectively decide how to spend $2000 (really, not just speculatively). Will it be spent on beer? Or will it sponsor a refugee? Or fund a new skate park?