Have you ever wondered how humanity came to be? After all, it’s in our nature to be curious and the universe is another mystery we long to uncover. Our interest in space can be dated back thousands of years before the Common Era, where eastern cultures observed and recorded the movements of the sun, the moon and the stars. Through these observations, sundials, star charts and calendars were created to track hours, days, months and years. In particular, it was useful for agricultural purposes in identifying harvest seasons and for sailors to navigate across the seas. As technology advanced, humanity explored the moon, launched satellites and sent rovers off to other planets in our galaxy.

Humanity has speculated on the origins of the universe since the beginning and has found comfort in religion and supernatural beliefs. Our curiosity has caused us to ask the big questions – Where did we come from? Are there other intelligent lifeforms in the universe? Is there really a God? Through the Hubble Telescope, we are starting to formulate answers to some of these questions.

The Hubble Telescope, named after astronomer Edwin Hubble, is the size of a large school bus and orbits at an altitude of 569km above Earth’s atmosphere, completing a full circuit every 97 minutes. The Hubble Space Telescope provides information on the electromagnetic spectrum of space and captures high-resolution images, allowing us to observe distant stars, galaxies and planets. It was built by the United States of America, National Aeronautics and Space Administration (NASA) with the purpose of extending our knowledge of the universe.

The benefit of having a telescope in space is that it avoids all the interference from our environment, light pollution, rain clouds and turbulence. The Hubble’s position high above the atmosphere means it can capture unobstructed images that are clearer and help us see deeper into our universe than our ground-based telescopes have previously been able to achieve.

The Hubble is a Cassegrain reflector telescope. Light enters the device through the opening at one end of the telescope’s tube shape. The light hits the primary mirror before reflecting to a secondary mirror, which then reflects the light to a focal point at the centre of the primary mirror. The mirrors used are similar to the ones you would find at home, although they contain a different composition to be able to reflect ultraviolet, infrared and visible light. If the alignment of either mirror is slightly off, it would cause the focal point to be away from the sensor, making the images appear out of focus. The light detected at the focal point is distributed through a network of small mirrors to several scientific instruments to record data for scientists to analyse. There is no actual camera aboard the Hubble. The telescope produces an image by recording the type of light and the location it was received, to then build a virtual image of what the subject appears to look like. This star-studded image shows the globular cluster Terzan 9 in the constellation Sagittarius, toward the center of the Milky Way. Courtesy of NASA.

Through the images from the Hubble, we have seen stars forming, planets colliding, solar eclipses on other planets, galaxies far, far away, super massive black holes, auroras on Jupiter, craters on Mars, stars dying and so much more. There isn’t much knowledge of our universe that hasn’t been confirmed or determined by the Hubble telescope. It is the first major optical telescope to be placed in space and has continually re-shaped our view and knowledge of life beyond Earth.

Every single time we receive data, we are bound to discover something new. NASA infamously focused on a space of ‘nothingness’ for a whole month, which was very controversial knowing how valuable and important Hubble’s time was. The information slowly came through and it was discovered that this ‘nothingness’ was actually not nothing but rather the presence of over one and a half thousand galaxies, captured in a stunning image. Just when you think there is nothing more to see and learn, space is constantly surprising us.

The Hubble has enabled scientists to estimate that our universe is 13.8 billion years old and provides evidence to support the Big Bang Theory. This theory is founded on the idea that before the explosive expansion of the universe, nothing existed, not even time itself. Using this concept, Stephen Hawking, an English theoretical physicist, provided reasoning to argue that God didn’t exist as a creator of the universe, if there wasn’t a time for them to exist in to create this universe. Rather, if a supernatural being was to exist, it would simply be as an observer of our world that abided by the natural laws. 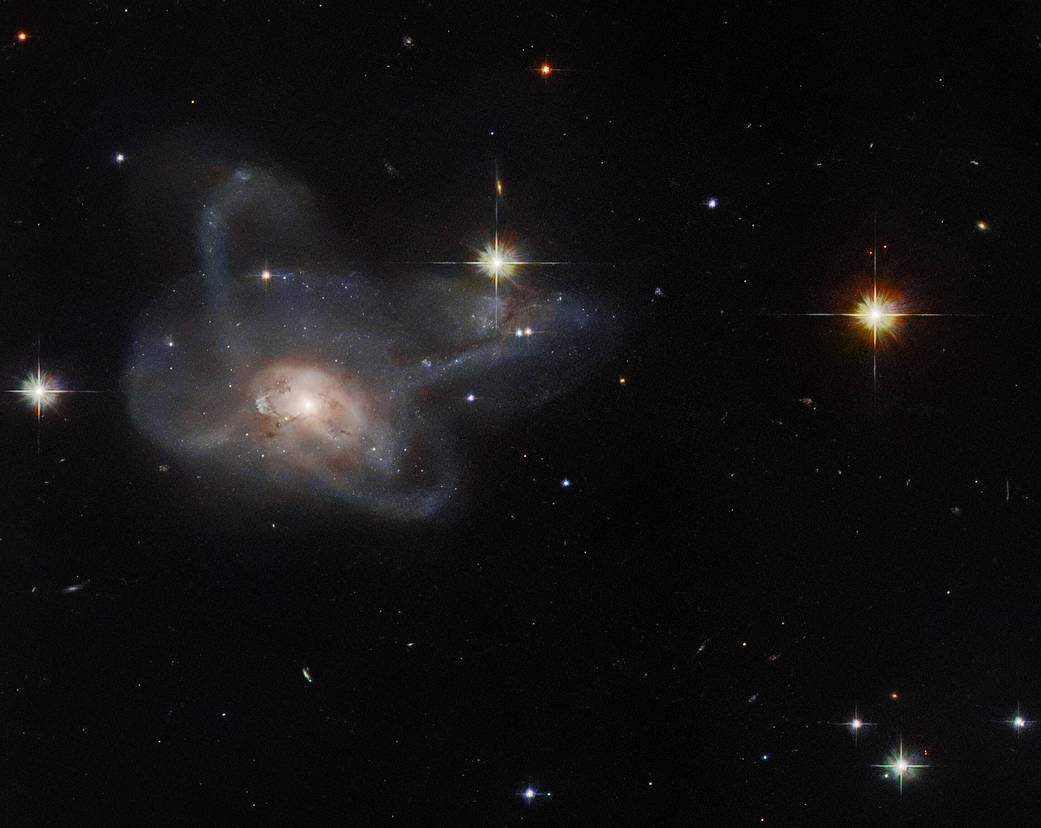 This NASA/ESA Hubble Space Telescope observation has captured the galaxy CGCG 396-2, an unusual multi-armed galaxy merger which lies around 520 million light-years from Earth in the constellation Orion. Courtesy of NASA.

Dr John Grunsfeld said, “the Hubble is not just a satellite. It’s a symbol of humanity’s quest for knowledge.” The Hubble’s launch in 1990, marked the start of a new scientific era that continues to feed our curiosity for space. Our view of the universe is about to be advanced even further with the development of a new space telescope, the James Webb Space Telescope. This telescope is promised to go even deeper into our universe than before, examining everything from solar systems to very old and distant galaxies from the time of the Big Bang. The telescope was launched into space in December 2021 and is currently undergoing checks with the first images set to be released in July 2022. For now, the Hubble continues aiding us in our exploration of infinity and beyond. This landscape of “mountains” and “valleys” speckled with glittering stars is actually the edge of a nearby, young, star-forming region called NGC 3324 in the Carina Nebula. Captured in infrared light by NASA’s new James Webb Space Telescope, this image reveals for the first time previously invisible areas of star birth. Courtesy of NASA.

Letters to the Editor