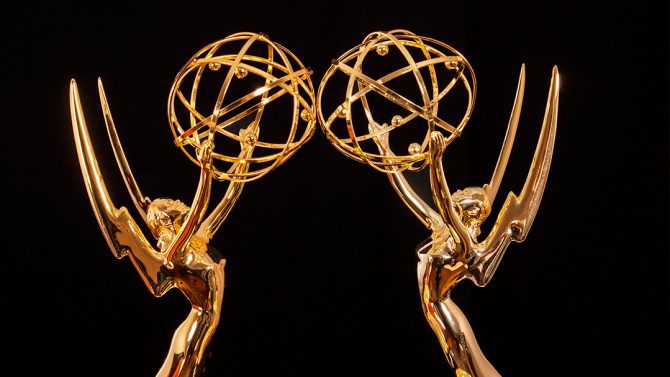 The Emmys: the Good, the Bad and the Ugly

It’s that time of the year again; TV’s boldest and brightest stars lined the red carpet for the 69th Annual Primetime Emmy Awards. I sat down with more than a few vodka cranberries and an open mind to give you this analysis so you may never have to sit through anything as heinous as an American awards show.

This year’s talking point was Lena Waithe who, alongside Aziz Ansari, won Outstanding Writing for a Comedy Series for the Master of None episode ‘Thanksgiving,’ based on her own experiences coming out. She is the first black woman ever to win this award and, as she pointed out, it is a testimony to the strides TV has made that ‘a little Indian boy’ (Ansari) and a ‘black girl’ could take out this award. This year’s Emmys truly championed women and people of colour. This is US’ Sterling K. Brown won Lead Actor in a Drama, which hasn’t been won by a black man since Andre Brown 19 years ago. Riz Ahmed won Lead Actor in a Limited Series for The Night Of, the first actor of Asian/Muslim descent to take this award. Atlanta’s Donald Glover was the champion of the night, not least because his tux was so sharp, becoming the first black man to win for Directing in a Comedy. Big Little Lies and The Handmaid’s Tale, both series with extraordinary female casts, swept the board and SNL’s Kate McKinnon took home Supporting Actress in a Comedy, and Julia Louis-Dreyfus continued her annual domination of Outstanding Lead Actress in a Comedy. No doubt, TV has aeons to go before it has efficiently tackled its diversity problem, but this year’s Emmys proved it is willing to open itself up to new voices and that Lena Waithe should probably be the next president.

This year’s host was The Late Show’s Stephen Colbert, and his opening monologue represented just about everything that was wrong with the Emmys (I think it’s important to point out here that I’m a Kimmel fan, and Conan at a push). The show started with a musical number in which Stephen desperately tried to move his arms in time, while almost pleading with us to ignore ‘global warming and the Middle East’ because ‘everything is better on TV.’ The number ended with an inexplicable rap from Chance the Rapper, whose feet were possibly nailed to the floor (c’mon Chance, you’re better than this) and then moved into Colbert’s monologue. While I, with my vodka cranberry half drunk, had merrily appreciated the satire of the opening number, I grew increasingly uncomfortable with how forcefully Colbert seemed to want us to slump into a TV-induced trance, while America decays unnoticed. He raises a good point; the diversity amongst networks alone is extraordinary and coupled with the range of series and talents, TV has never been this good. Something about Colbert’s dead-inside smile and his insistence that TV will solve all our problems made me feel a strong urge to smash the television and go outside and protest something.

Also, for all Colbert’s ditzy proclamations that the Emmys have never been more diverse, Sterling K. Brown’s measured, hilarious speech was inexplicably cut short, yet Kate McKinnon was allowed to dither on whilst Lorne Michaels watched over her like a benign dictator.

Two words, Sean Spicer. I like a self-deprecating joke as much as the next person but, as much as I hate myself for it, I’m inclined to agree with Zach Braff who tweeted, ‘I’m not ready to laugh ‘with’ Sean Spicer.’ Spicer, ex-White House Press Secretary, was wheeled out to declare ‘this will be the largest audience to witness an Emmys period’, looking suspiciously like he’d been consuming a few of those TV drugs Colbert was trying to sell us earlier. Sean Spicer represents everything the Emmys were trying to abandon: hate speech, oppression and inequality. The Emmys weren’t ready to see Spicer pretend his lies were in good humour and certainly weren’t ready for him to get a laugh doing it.

All in all, it was a cautious ceremony with no big surprises in the winners. Yet, perhaps this was what the Emmys needed. Sean Spicer aside, the show made quiet strides for women, for people of colour and the LGBTQIA* community and, fingers crossed, points to a new direction for TV.