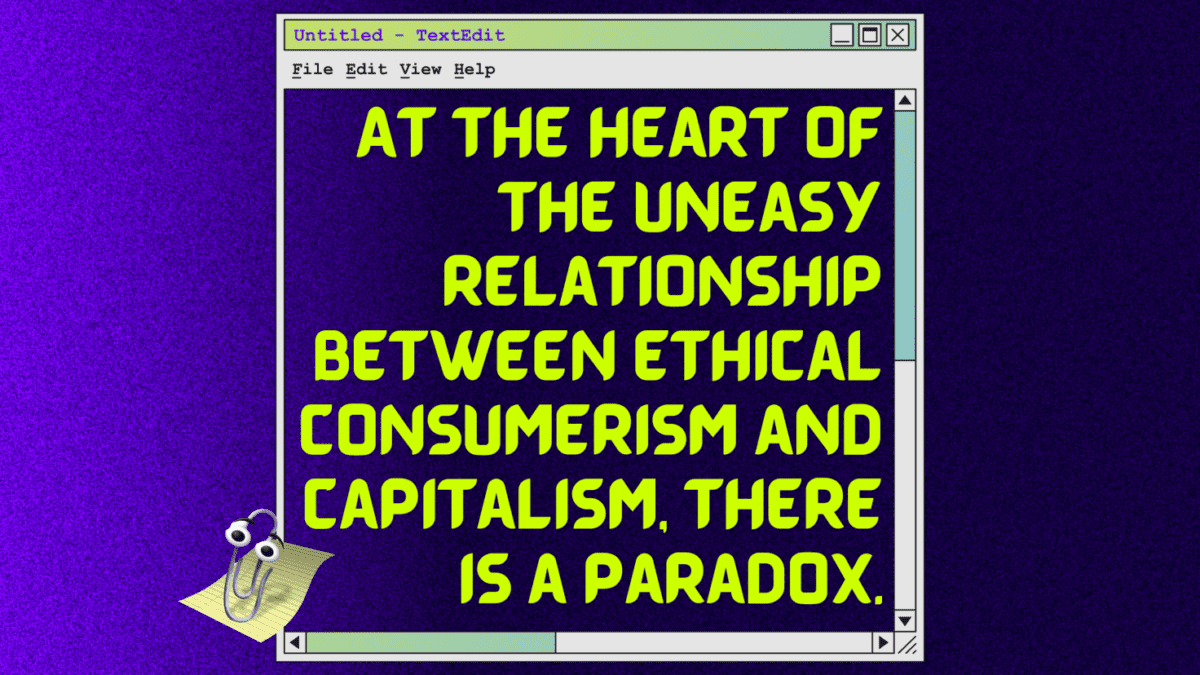 Consumption in the capitalist system has always been influenced by external factors – or at least factors which transcend desire and ‘need.’ In principle, external factors can apply to anything; let’s take bread, orange juice and cars as examples. There are so many options staring at you on the shelf or in the dealership. Each product is slightly different from the next, but the one thing they have in common is being the core product you need. Price is an obvious discriminator; the relentless desire for companies to promote affordability is inescapable. Yet, there is also a range of other factors to be considered. Do you want white bread or multigrain? Pulp free or no added sugar? An electric, hybrid, petrol or diesel motor?

The choices we make every day as consumers are inescapably linked to the rise of ethical buying. Given the enormous impact the capitalist system has had on the climate crisis and environmental degradation, do we not have a responsibility to act? Our decision-making is relevant as individuals; there is power in our consumer dollars. This idea that we can all make a difference, individually and as a collective, is a reflection of the hopelessness many feel as governments fail to act.

That said, the ACT government has taken it upon itself to respond to demands from citizens regarding ethical consumption. Free single-use plastic bags were banned long ago and other plastics, such as straws and cutlery, will soon follow. Supporters of ethical consumption naturally applaud these moves, but it is not an ‘either/or’ for governments or individuals to act. For maximum impact, it must be ‘both/and.’

Ethical consumption has increasingly been viewed, as pertaining to the environment and, especially, the climate crisis. For this reason, individual decision-making, such as choosing to cycle or take public transport has been promoted over driving for decades. But it can also extend to animal welfare: by refusing to buy cosmetics tested on animals or caged eggs.

More wholesale boycotts, of companies and not just specific products, also exist as a component of ethical consumption. Here, the objection is often directed at a company’s poor ethical behaviour, which, unsurprisingly, is almost always profit-driven at the expense of someone or something important. Someone concerned about workers’ rights may refuse to shop with Amazon. Or someone concerned about the climate may opt for Bank Australia over the big four banks to protest investments in coal and gas. These choices are unquestionably a form of ethical consumption. However, while boycotts can express an individual’s ethical preference, buying free-range eggs over cage eggs is unlikely to affect the business of supermarkets such as Coles. Similarly, a person who boycotts ANZ is a forgone customer, thus, many businesses may consider them ‘lost’ and not feel the need to change.

At the heart of the uneasy relationship between ethical consumerism and capitalism, there is a paradox. Fundamentally, capitalism is both a facilitator and a saboteur of ethical consumption. We are told ‘the customer is always right.’ Therefore, we are empowered to dictate by virtue of what we do and don’t purchase, what products we want. Then, in theory, the free market should respond to that demand. Certainly, there is some real-world truth in this. Woolworths, Australia’s largest supermarket, recently announced that they would no longer sell cage eggs in their stores from 2025. Given that 70 percent of eggs sold in Woolies in 2009 were cage eggs, this is a remarkable turnaround and a clear victory for ethical consumption under the capitalist system.

Yet, one of the drawbacks of ethical consumption is that it involves, more often than not, consumers paying higher prices. It is exceptionally difficult to find a product, whether it be recycled paper over paper, or rainforest alliance coffee over an unsustainable alternative, where the more ethical product is cheaper. This can challenge those who do not have large enough disposable incomes to make their preferred consumption decisions. Thus, while Woolworths’ decision on cage eggs should be applauded, those Australians living in poverty and who have little choice over what products they buy must not be forgotten either. ‘The customer is king’ is only applicable where the customer has money to spend.

The ‘holy grail’ of the capitalist system remains the profit motive. This is the basis upon which an entire global economy has been built and without which it would be unrecognizable. Workers work to earn wages, but within the social and economic hierarchy which is inevitably created, the most important players are businesses. CEOs roll out of bed in the morning with the sole objective of making greater profits.

Gross Domestic Product (GDP) , as is relentlessly drilled into first-year economics students, is the sum of different aspects of economic performance. Most notably: consumption. The more we consume, the more this number inflates: the country grows and some politician inevitably takes credit. But where does ethical consumption come into play? Answer: nowhere. It doesn’t even get a mention.

It is this failure that has drawn us into the climate crisis and mass animal exploitation, among other ethical, moral and environmental catastrophes. The profit motive and GDP are the foundations upon which the capitalist system operates. GDP is easy to measure; environmental sustainability is harder. Profits are even easier to measure; animal suffering is impossible to quantify.

If individuals’ agency is truly at the heart of the capitalist system, as its advocates assert, then ethical consumption is a true genesis of a pushback against the status quo. The tenets of the system can be turned towards better ends; once it is made clear to those at the top that their cherished profits can only be maintained if they meet the demand to reconsider the ethical dimensions of their business. Within the system, as it stands, ethical consumption, driven by citizens, remains the last hope for a better world to live in.

Super: Why You Should Care