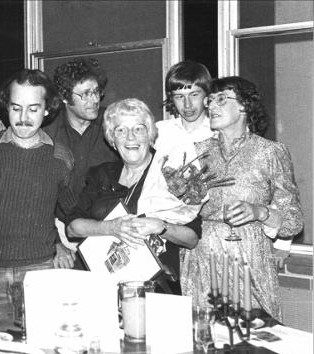 When you google Di Riddell, the top links are to a life coach. ‘Di Riddell brings out the best in people,’ her website reads. For the new ANU Student Centre in Kambri, this seems like a wonderfully aspirational namesake. But the first Di Riddell has no links to ANU. Dig a little deeper, and a second Di Riddell appears.

Di Riddell, born Diana Gould, moved to Australia in the early 1960s, in the midst of the Cuban Missile Crisis. A friend’s request that she fill in a week-long vacancy at the ANU Student Association led to a 30 year career at ANU. At the time she joined the Association, it was the only association with a leader elected democratically.

During her time, she placed herself at the centre of a David and Goliath struggle for student representation at ANU Council. In doing so, she became an important advocate for students.

She facilitated campaigns for health services at ANU, particularly during drug crises. She also took a stand against the lack of condoms in Canberra. In 1972, she organised a condom vending machine to be brought from a brothel in Sydney, to enable safe sexual practices for students. In a 1977 edition of Woroni, one student publicly thanked Di for helping him find emergency housing.

She became known for averting crises, organising food and beds for activists and negotiating with the police. She established strong relationships with ACT officials while bailing out mass arrested students.

“When a student demonstration was pending,” Detective Sergeant Ron Dillon told The Canberra Times in 1995, “I knew Di would be putting aside the Bail Money.”

Di Riddell’s administrative tasks ultimately spread across almost all social and political campaigns of the late 20th century. She was at the heart of ANU’s campaigns for women’s rights, against Vietnam War conscription, and even the Aboriginal Tent Embassy. She organised blankets for fasting East Pakistan protesters in Canberra in the 1970s, and facilitated boycotting of the Springboks.

The lessening of student activism in these years was clearly another motivator for Di’s move. Speaking to The Canberra Times in the 1990s, she said “They couldn’t sustain their rage… They’re only interested in themselves.”

Today, essential places of community engagement and grassroots activism are indebted to Di Riddell for their institution at the ANU and in Canberra. The Drill Hall Gallery, the Food Co-op and Radio Station 2XX all have links to Di’s tenure.

The ANU Naming Committee’s choice to have the Student Centre adorned with Di’s name pays homage to the strong role ANU has historically played in activism and political engagement throughout Australia. Her influence has continuing significance for activists on campus today.

Is Intersectionality Exclusive to Third-Wave Feminism?