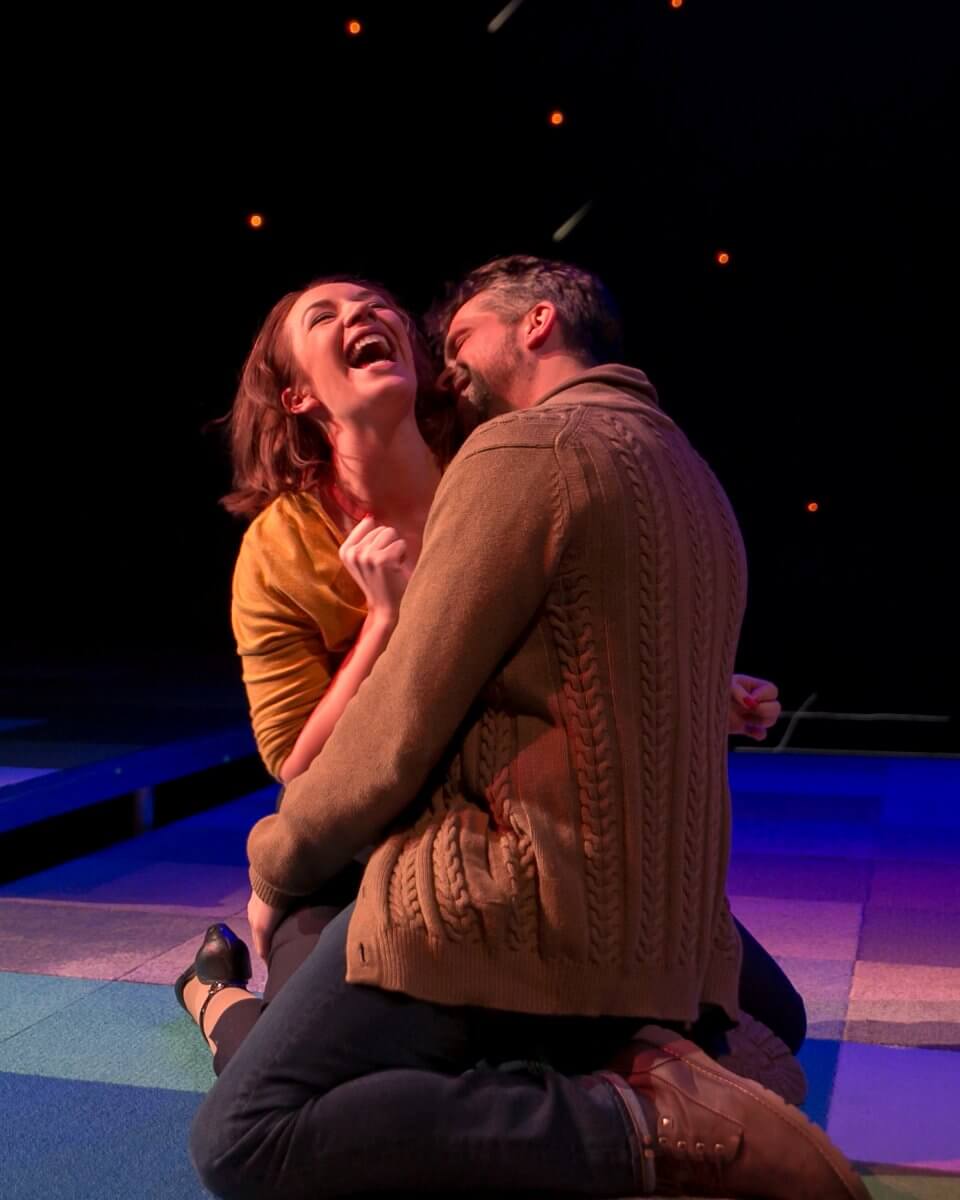 The Street Theatre’s production of Nick Payne’s Constellations sets an incredibly high bar for itself. It promises ‘an unmissable, universe shifting show that will challenge how you see life, and change how you live it.’

Unfortunately, Payne himself does not reach these lofty heights. His script is an ultimately disappointing subversion of the rom-com, in which contrived twists and shallow punts at profundity mar any attempt at providing perspective on life’s choices. Yet, under the able direction of Caroline Stacey, The Street makes diamonds out of coal. Through excellent performances and outstanding technical work, Stacey transforms an average script into an engaging night at the theatre.

A surreal sensorial experience engulfs the audience from the moment they take their seats. Lights twinkle behind an abstract, multileveled set – all acute angles and enormous flat planes. The alien surface is bathed in a shifting grid of harsh lights, evoking the whirring innards of a computer and the urban grime of a subway station. It is ingenious lighting design, creating an immersive journey through to the final backlight winking out of existence.

The play itself is less inspiring. Payne structures his work around a series of significant moments in the universal boy-meets-girl story. Each of these scenes – the couple meeting, their first fight, the proposal – is iterated before the audience’s eyes as the play explores the possible consequences of every choice to our voyeuristic delight. The premise is dripping with potential. Each vignette becomes clear through an intertextual awareness of genre with the audience’s perceptions informed by the tropes they expect. Yet, what could have been a metatheatrical exploration of free will and existentialism – couched within an infinite multiverse – is often painfully contrived. While there are several nice moments, with the play’s dark themes well balanced by timely humour, Payne’s point is undermined by a lazy twist. Ultimately, Constellations tries too hard to be profound.

However, this is almost irrelevant to the enjoyment of the evening. Constellations’ cast of two is nothing less than exemplary, presenting the audience with effortless yet elegant performances. With the same moments played out, again and again, the play could easily devolve into an awkward audition tape of alternate readings. Instead, Lexi Sekuless shines as the quantum physicist Marianne. She deftly leaps between infinite permutations of identity, from charmingly innocent to world weary, to cold and antisocial. Kristian Jenkins keeps pace as the down to earth beekeeper Roland, complementing the energetic Marianne with more subtle shifts in behaviour. Together, the two delicately tread their way through a recurring script while constantly keeping the audience engaged. It is a testament to their abilities that the two-hander performance never becomes boring.

Inspired production carries these strong performances. Kyle Sheedy constructs an elaborate, layered soundscape to compliment the performances of the two leads, and emphasise Payne’s musings. The central conceit of the play – ‘imagine rolling the dice 6,000 times’ – is used as an auditory motif, the rattle of dice at once thunder, the clink of glasses, a projector flicking through slides, each signalling a shift between possibilities. Equally, Owen Horton’s lighting design provides a vivid, surreal vehicle for the director’s vision. Abstract under lighting supports stylistic blocks hanging above the set, which serves as everything from storm clouds to fluorescent hospital lighting. If Payne’s message feels tired, at least every aspect of the production work is fresh and exciting.

Don’t watch Constellations for its script. It takes late night reflections on the meaning of life and puts them through the rom-com wringer in the hope that something beautiful will emerge – hope that is unfortunately dashed by a contrived twist. Like Marianne, Payne struggles to enunciate the ideas he explores and squanders the metatheatrical opportunities of his premise. However, weak writing does not detract from a solid night of entertainment. Watch Constellations for the incredible performances of Lexi Sekuless and Kristian Jenkins, who present a masterclass on precise, subtle, effortless acting. Watch it for Imogen Keen’s phenomenal set design, and the sensory visions conjured by Kyle Sheedy and Owen Horton. The quality of The Street’s production lifts an underwhelming script towards something truly stellar.