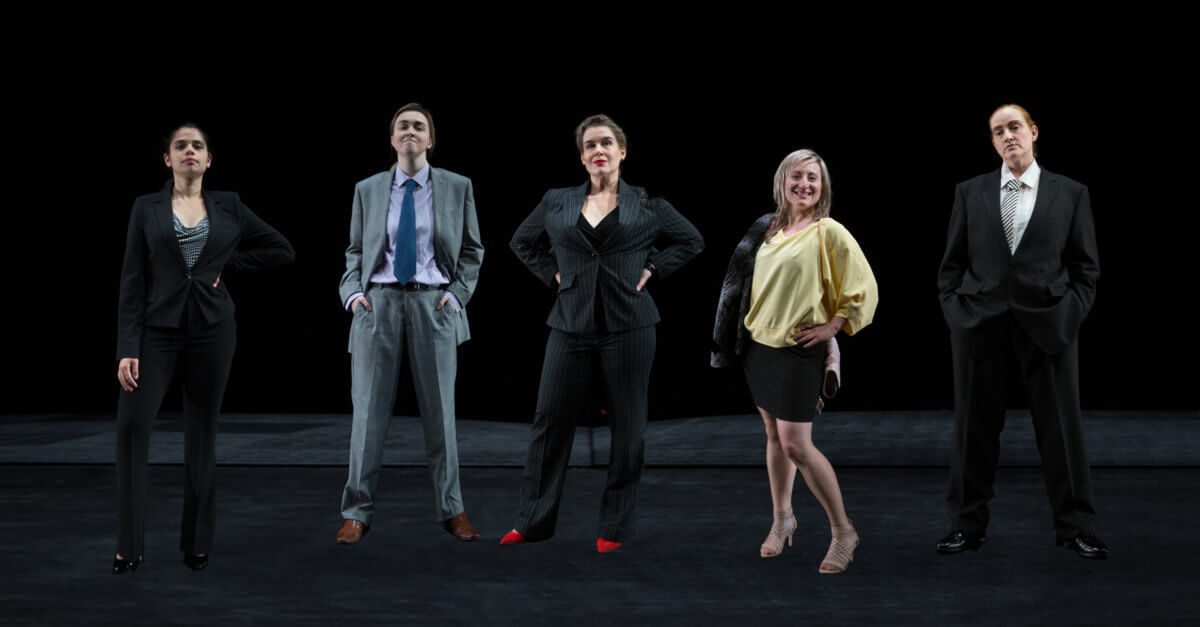 She-Wolves of Wall Street Theatre: Girls Dominate in BOYS WILL BE BOYS

‘Welcome to the trading room floor’, reads the poster for the Street Theatre’s new production Boys Will be Boys. And what an introduction it is. Award-winning playwright Melissa Bubnic’s play is brought to life by director Caroline Stacy, promising a 90-minute non-stop barrage of swearing, songs and cutting feminist satire.

Inspired by the ADFA scandal a few years back, where the consensual sex of a female cadet was disseminated without her knowledge, the story examines the experiences of women in a male-dominated industry. Astrid Wentworth, played by the exceedingly talented Pippa Grandison, is a successful stock-broker whose life is a stream of high-stake deals, dry martinis and visiting strip clubs with the rest of the ‘boys club’. When she takes on a young female protégée in Priya (Isha Menon), she finds herself caught between loyalty to her gender and her steely reputation. A classic antiheroine, Astrid plays a careful game of constantly keeping power, a position that is deconstructed cleverly when she meets and forms a quasi-sexual paid friendship with a prostitute Isabele (Kiki Skountzos). But in the world of business, you can’t stay on top forever, and playing to win is tricky when the game is rigged against you…

Grandison is superb in the leading role, marrying a Katherine Hepburn-esque line delivery with her jazz-salon singing style. Although she is undoubtedly the star, the cast is a skilled ensemble and it is exciting to see such a strong female cast working together. With only five actors, they slide between genders to embody different characters, interestingly undermining the ‘gender binary’ upon which the play finds its base. This is apparent at different points throughout the show, such as Skountzos’ wearing heels even when playing a male stockbroker.

A stand out of this production is the music that interweaves through the story. Musical Director Jess Green works with award winning sound technician Kimmo Vennonen to fuse sleazy jazz with sharp techno, accentuating the binary of the Wall Street business. Indeed, stark contrast is a theme of this production, with the (also award winning) lighting designer Niklas Pajanti concentrating harsh spotlights, shadows and occasional flashes of colour. Even the costume design is as black and white as the story, while notable flashes of colour including Isabelle’s green dress stand out against the monochrome. A mention must also be made of the stage design – the minimalist set has a funhouse mirror as its main backdrop, making a point about the warped reflections that we present to get ahead.

The play itself is challenging, taking a brutal look at power and the gender divides that dominate male-led industries. Its ‘us vs them’ mentality is evident – not just in the story, but also in the directing and designing choices that thread the piece together. Although the show may not sit well with some third-wave feminists, with one viewer commenting that the gendering was very ‘old-school’, it gives an interesting analysis of power and gender in the workplace. And, one way or another, it is tremendously enjoyable, with enough bluesy tunes to make even the patriarchy slightly easier to swallow.

Boys will be Boys is on at The Street Theatre until 11 November.