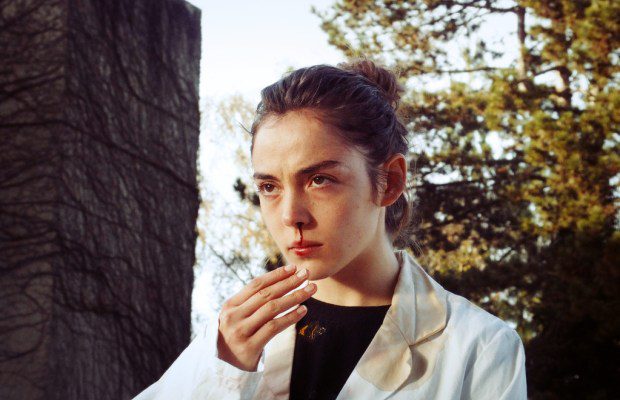 It’s interesting watching a movie centred on cannibalism and having absolutely no idea what is going on. When I turned on the 2016 French film ‘Raw’ (‘Grave’), I had only briefly read a description of it that read ‘vegetarian girl goes to vet school’. So when bright-eyed, academically-gifted central-character Justine gave into temptation and devoured her older sister’s amputated finger, I was startled, to say the least.

Director Julia Ducournau’s debut film tells the story of Justine (Garance Marilleier), who moves away to college to study veterinary science, following in the footsteps of her parents and older sister Alexia (Ella Rumpf). There, she and the other first years are forced to endure a series of hellish hazing rituals, including being forced to eat raw rabbit kidney – an ominous hint of what was to come. As the movie progresses, Justine explores and battles with her own, and Alexia’s, yearning for flesh – both human and animal.

At the moment of the finger eating (and at several points after that), I admit I had doubts as to my own predominantly vegetarian stomach’s ability to handle the rest of the film. I pressed on though, and I’m glad I did. Ducournau presents a visually stunning, meticulously edited and cleverly written first film which well and truly goes beyond a mere thriller. Despite her increasingly repellent behaviour, the audience remains emotionally invested in Justine as she struggles with loneliness and confusion, discovering her sexuality and bizarre desires for flesh.

The film’s obsession with flesh is intoxicating. Ducournau conveys the frantic, feverish physicality of youth in a startlingly refreshing – albeit mildly traumatising – way. Every moment flesh is consumed is a shock but also layered with meaning. The gore of the movie seems to be an expression of the chaos of youth. Running motifs of savage sexuality, drunken humiliation, eating disorders, teen angst and frenzied peer pressure are evident throughout the film. These make Justine’s every violent episode seem to be an outlet for her own confusion in this world of youth and self-discovery.

The strong performances of the two lead actors carry the film. Their turbulent sibling relationship is consistently tense, and at points, heartbreaking. It climaxes in a shockingly aggressive fight in which the movie pauses momentarily; the two sisters staring, their teeth locked into one another, into each other’s eyes. The film’s lead Garance Marilleier is also able to capture, with astounding versatility, Justine’s transformation from a naive animal rights activist to the monstrous and emaciated wreck she becomes.

This film is original, arresting and nauseating … but well worth the gore.