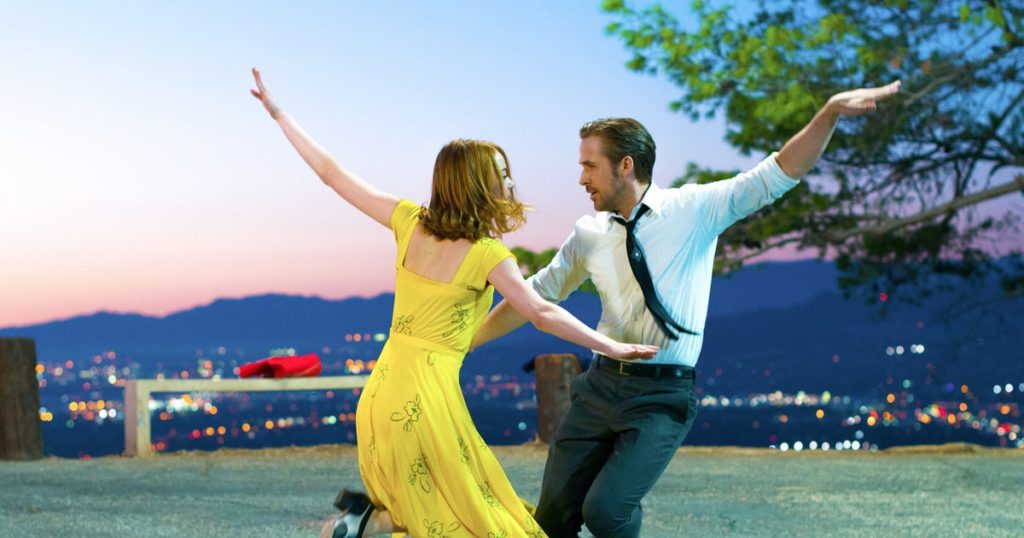 Join our armchair reviewers Anna and Jeevan as they take a trip to the cinema together to see 2016’s singing and dancing hit, La La Land.

La La Land director Damien Chazelle’s take on the musical genre is as colourful and energetic as a long-form explosion. Don’t go in looking for an onion – the layers are limited to face-value messages about freedom, fate and fumbling toward the future. But being a musical written as an ode to jazz, featuring Ryan Gosling as a struggling jazz pianist, it never needed to be a Bible-worth of canonical messages.

For me, there’s something worthy of acclaim in intelligent use of colour, music and sound purely to bring joy. It’s also a refreshing breath for a work in the musical genre to use entirely new music with largely untested singers.

This musical uses colours abundantly. It forces you to notice them. You see it in the colour-wheel dress codes and the seemingly strident affirmative action for redhead cast members. Mia (Emma Stone) is outfitted in blue as her three friends take on the remainder of the primary colours for the number ‘Someone in the Crowd’. But this isn’t just to conform to a whimsical idea of musical theatre: the intensity of colours decreases as the aspiring actress Mia loses hope to follow her dream and act in LA. Visually, shot transitions also shift as the movie progresses. The rapid clinking-glasses, dizzying turns and star-ward panning shifts become sudden shot changes, expressing the changing seasons blankly and without the excitement of the past, brightened by idealism.

Chazelle places you in the palm of his hand with the message ‘music is magic’, only to have his direction force you into submission with the realisation that magic isn’t real.

Musically, the show is diverse – if a little out of touch with 2016. A-ha’s ‘Take On Me’ is as recent as the pop music featured goes: but the original songs, written by Chazelle’s Harvard classmate Justin Hurwitz, go from dulcet, Gershwin-inspired baritone-rich jazz (‘City of Stars’), to huge swelling numbers. These songs are made complete with choreographed backflips, parkour, and a city stopping to sing along (‘Another Day of Sun’). It’s generous in the styles it embraces, and as music should do, it elicits emotion. I spent times equally in wonder and wanting to jump out of my seat and clap. The singing is unpolished, and Chazelle’s direction explicitly gave room for that. It makes the dreams being pursued seem relatable and maybe, just maybe, attainable.

The story is a romantic comedy. It’s a musical. For far too many people that will be reason enough to never watch. But this is a romance which charms and a comedy which makes you laugh genuinely and unabashedly. Just ask the theatre-full of people watching with me. Yet, as we watch the chemistry between Gosling’s socially-introverted Seb and Stone’s career-flailing Mia, we trace a compelling and believable story. That is incredibly rare of musicals, and the reason why La La Land is ultimately such a triumph.

It is of course the absences that Chazelle creates, and from which he conjures the feelings of unanswered nostalgia, that grounds the story in reality. As Seb yearns for his jazz club to be successful and for the revival of a musical era he views as untouchable by time, our eyes – now trained for colour – are left searching. Chazelle shows jazz itself as an absence in the world. Mia too reaches for a strand of hope in Seb’s call to authenticity, and in making her art for the sake of art – as it was in the bygone era of jazz. But jazz itself is shown to be corrupted by a new age of music (brilliantly performed by John Legend) and the dissipation of that hope for authenticity ensures we won’t be fooled by the rosy colour of that past.

The verdict:
This musical opens with Tchaikovsky’s ‘1812 Overture’ but finishes with a bang.

‘This is the dream! It’s conflict and it’s compromise, and it’s very, very exciting!’

Emma Stone plays Mia, an aspiring actress and bored waitress trying to make it big in notoriously ruthless Los Angeles. She’s beeped at, insulted, and then finally serenaded by Sebastian, a frustrated musician who dreams of owning his own jazz club. The comic timing of both is delightful as they sing and dance through the temporally confused plot, but Gosling remains a vaguely unpleasant foil to Stone’s brilliant naturalism.

The Astaire and Rogers-inspired singing and dancing provide vibrancy consistent with the pipedream theme woven into the storyline. The opening number is reminiscent of musical-to-film productions like Hairspray and Grease Live, where camerawork adds depth and energy to ensemble performance. Frustratingly, while enjoyable and visually meticulous, the dance duos almost, nearly, but don’t quite manage to lift off from the high standard that Chazelle has set by evoking older tap classics. It’s hardly a comparison to the glorious synchronicity of Rogers and Astaire back in the 1930s classic Swing Time.

The compromise between past and present, between ‘timeless’ costuming (thirties, noughties, and everything in between) and smartphones creates a confusion for the first part of the film that is not improved by the use of manic shot transitions, particularly in ‘Someone in the Crowd’. This is contemporary cinema pretending to be classic film, throwing up a multitude of historic, geographic and cinematic allusions but never slowing down enough to make them mean much.

I generally dislike American movies, romantic comedies and Ryan Gosling, and wasn’t expecting to enjoy La La Land. Every time the smug triple threat walked on stage I wanted to smack him, but Stone’s performance and the film’s ending left me alternatively laughing and crying. Admittedly, by the end I didn’t hate Gosling’s character as much: Sebastian had struggled, Sebastian was living his dream but ultimately Sebastian wasn’t as successful as Mia.

It is perhaps the skilful use of foreshadowing that occurs in the first third of the movie that may be one reason why some people are returning to see the film for a second or third time. Song lyrics allude to characters and their trajectories, throwaway lines become bittersweet, and all are swept neatly into a final twist.

Chazelle’s finale epitomises what the rest of the film had been trying to aim for aesthetically, emotionally, and in its ongoing flirtation with the intersection between art and reality. The swirling crescendo of music, movement and colour is both beautiful and a subtle mirror to the overarching narrative.

The verdict:
La La Land is a pseudo-intellectual romantic comedy light on meaningful content and heavy on sound and colour, with just enough thematic stuffing to make viewers believe they have watched something significant. Emma Stone, jazz era nostalgia and the finale lift it into a film worth watching.