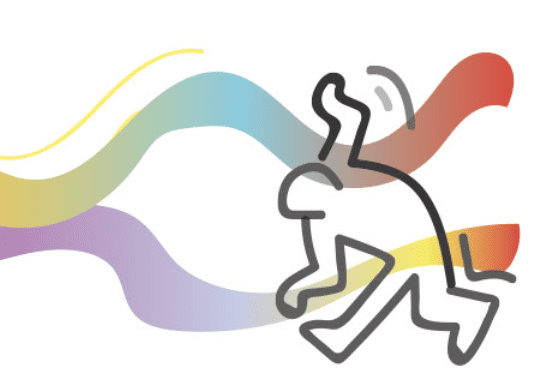 Last year I spent six months in Stockholm for university exchange, and was super fortunate to be able to delve into the depths of the underground techno scene. I was struck by the uniting power of the Stock- holm underground, and I found inspiration to return home to Canberra with it.

I was introduced to Stockholm’s underground on my first weekend exploring the city in August. Soaked with rain, with no battery in my phone and barely any idea of the city map, I nearly decided to head back to my hostel and not visit the celebrated contemporary arts museum Fotografiska on this particular Friday.

Thankfully, I listened to my intuition.

Amongst other exhibitions, I sat and viewed a captivating piece by Refik Anadol titled Latent History, an algorithmic streetscape motion imagery consist- ing of hundreds of thousands of social media photos of Stockholm analysed and sorted by AI. Dwelling on the digital reimagining of Stockholm developed by this artist, I went upstairs to Fotografiska’s renowned restaurant for lunch when I heard minimal techno coming from the sister bar at their Friday evening event Studio Live.

I moved into the bar, ordered a southside and observed the dancefloor, pleasantly astounded to have discovered my first taste of the techno scene in the most unexpected of places. I admired the social happenings on the dancefloor and the DJ set by Cosmo Jonsson, a Stockholm producer, DJ and co-founder of the underground rave Kiosk.

A group of Stockholm skaters originating from the UK and Sweden had noticed me hanging solo at the bar and invited me to join them. Not far into our conversation, one of them remarked that if I was enjoying the gig at Fotografiska, then I was in for a treat living in Stockholm. The next day I joined them in the out- skirts of the city district at my first Swedish open-air rave – Sweden’s version of our beloved ‘bush doof’. We trekked through the woods and into an electric rave set beside a sprawling lake. The music ranged from live hypnotic bands to DJ sets from all corners of techno’s subgenres into the early hours. As I sat on the rocks beside the lake surrounded by new friends that nippy summer morning, I knew Stockholm’s underground had totally gripped me.

A few weeks into my exchange, I rolled into Stock- holm Central Station to meet two of my new Swedish friends on a September evening. We were heading to underground rave Botánica on a whim. We hopped in an Uber and gave the driver directions sent privately via email to registered guests.

Arriving at the address, I noticed no pulsing bass or streams of people lining up. We walked up a few concrete stairs, past the bouncers and into a dimly-lit, smoke-filled, industrial-feeling expanse with a sound system to put many to shame. Walking into the thick of the main room dancefloor, I was instantly captivated by the sensory experience and the energy amongst ravers in the room.

The main room hosted a top-tier line up, including the likes of Vincent Lemieux and Tom Ellis. Add to that, an atmospheric chill-out space and a ‘library’ dancefloor lined with books, indoor plants and the same resident DJ spinning house tracks on vinyl from the comfort of an antique sofa all night long. It was the ideal party. Regularly attending Botánica over the subsequent months, I built friendships with the inspired minds behind the party and was welcomed to their crew with open arms.

Many ravers and DJs I met at parties during those first few weekends became some of my very closest friends. In months passed, I’d join them in under- ground bunkers for afterparties or volunteer setting up raves in the meatpacking district of Stockholm. I’ll never forget scraping snow off tables in the smoking area of Kiosk in the middle of freezing winter before the party opened, and realising I had truly become a part of the community I had admired from a distance that first night at Fotografiska.

Stockholm’s contagious energy went unmatched across the seven European cities I visited during my half-year abroad. Despite all preconceptions passed onto me prior to my arrival in Sweden, I put this down to a generation of Swedes who are extremely open-minded and interested in other peoples’ contributions.

I felt this on a personal level as I was invited to DJ several times over my six months in Stockholm. Cosmo, whom I saw perform at Fotografiska on my first week- end, invited me to join him for a back-to-back (B2B) set with him in October at a local bar. I was super nervous before this gig, which made me introspect as an artist. Performing in front of a room of strangers is totally within my comfort zone. But playing with fellow musically-inclined friends can induce nerves for me. After my set with Cosmo, I ended up playing another couple of B2B sets with a friend’s crew Skogswerk. Stockholm built up my confidence as a DJ. It made me refocus any nervous energy I felt playing with top-tier local artists into appreciation for what I can learn through co-collaboration and co-creation with friends.

At my last gig in January, I performed a slower-paced experimental set for four hours in Lilla Baren (‘small bar’) at popular Swedish/French bistro Riche. This set really spoke to me, as I explored underground ambient music previously unknown to me thanks to useful advice from the booker. Overall, I experienced a great deal of growth as a DJ due to Stockholm’s focus on community and creativity.

While the added uncertainty of a faraway city certainly added to the thrill of partying in Stockholm, Swedes know how to make every weekend a deviation from the last. I believe with the crews and locations available, Canberra could benefit from this approach and I encourage organisers to break the boundaries of

what they consider to be a typically successful week- end in our city. For example, after attending Stockholm events that fused food, art or wine with electronic music in unobvious ways, I have felt inspired to establish a similar styled event in Canberra.

Returning to Canberra has given me a refreshed appreciation for the things we do well. I have discovered, and rediscovered, the many electronic crews we have running parties. It is really exciting to see the breadth of styles and spaces on offer. On that note, Canberra promoters focus on creating safe spaces at their parties. There are safety officers, safety hotlines and zero tolerance policies. Canberrans lead a beautiful example of how to build safer spaces in the underground. With a friend who can offer their northside sharehouse, the best club in town Sideway, and the many outdoor locales available in Canberra, we have an extremely colourful and inclusive scene that we can use with far more logistical ease than many of our national and international counterparts.

There is an abundance of community within any electronic music scene around the world. Friendships are formed in the little moments, whether it be lending a hand in setting up parties, over conversations in toilet lines and in the early hours shared at the afters or ‘kickons’. Building connections has enabled my music experiences in Canberra and abroad. My advice to people looking to DJ or work in the music industry is to consistently support the places or parties that interest you the most. Becoming a regular is the best way to suss out who the bookers are, familiarise yourself with a brand, build circles and discover new music. You reap the rewards, personally and professionally, of being an active and enthusiastic raver.