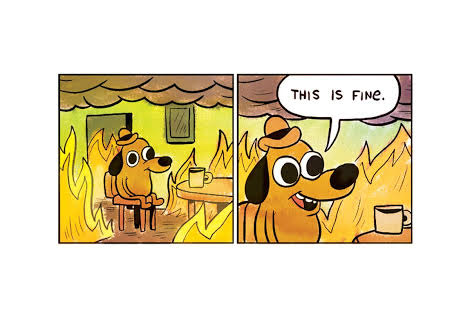 If the last decade and more has shown us anything, it’s that politics clearly isn’t up to the task. Climate change is still advancing and we’re not doing nearly enough, captive to a system that will never prioritise action.

And yes, you should be interested in its anthropogenic origins, unlike agriculture minister David Littleproud who said on ABC’s Q&A earlier this month that it was a “big call” to blame humans.

There is the straight up lunacy of those who flat out deny climate change is happening. This European summer, ferociously baking the continent, should give some indication; mild summer days, reliable winters and ice sheets which have stood since time immemorial are not part of our new reality. Not to mention the drought Australia currently faces.

But beyond this misguided interpretation, there is the far more sinister view that agrees that climate change is happening but contends that it might well be a natural cycle. A variety of vague anecdotal justifications follows, with references to great changes in climate that have occurred in the past and muttered condemnations of the science.

Literature reviews have found the clear majority of peer-reviewed papers on global warming agree that it is happening. This is not the slim kind of majority which has plunged Britain into the mess of sorting out Brexit. This is a superbly solid 99.99 per cent majority.

So what purpose does agreeing with climate change but remaining vague on the cause serve?

It charts a firm course towards the Island of Inaction, steaming along on the Good Ship Politics. If we didn’t cause it, the argument runs, we can’t do anything about it, so why bother? Let’s leave things how they are: our polluting industries and petrol cars, our global trade networks and our waste, our throwaway mobile phones and, of course, our electricity grids.

The National Energy Guarantee (NEG) is the policy this type of thinking leads to. It’s a temporary solution to a long term problem, one which shows the limitations of the system which created it.

The NEG, now with support from the Coalition party room, replaces the Clean Energy Target, putting a reliability requirement and emissions requirement on electricity retailers and large electricity users.

The reliability requirement means suppliers must supply a certain proportion of their energy from non-intermittent sources. That means gas, coal and batteries – but this would not have prevented the 2016 South Australian blackout, according to the Energy Efficiency Council, which developed the scheme. This is a political fix – and it’s the only one we’ve got.

The NEG also mandates a 26 per cent reduction in greenhouse gas emissions on 2005 levels by 2030. Greenpeace says this is “grossly inadequate”. In the first two years, modelling shows the first 24 per cent of that reduction will kick in, leaving a decade to achieve a further 2 per cent reduction. So much ambition.

The NEG is complicated. There’s more detail than there are column inches. Barnaby Joyce, who keeps popping up in this column, summed up the political situation: “The issue is this: people in the Kmart, people in the local pub, they don’t care about the Paris agreement. It means nothing to them. It has no purpose.

“What matters to them is this: that they can be able to afford their power bills and they currently cannot,” he said.

If people in Kmart or the local pub don’t care, it’s not because they don’t have the capacity to. It’s because politicians like Joyce – who as member for New England represents some of the most drought affected farmers in the country – have failed in explaining why it matters.

Quite a lot, as it happens. As long as the sea hasn’t risen the 577 metres to flood Canberra, politics is still the main game (even though, at that height, the waters will have inundated a number of key electorates).

The “greatest moral challenge of our time”, as Kevin Rudd put it, has instead become the greatest existential threat to political leadership of our time. Malcolm Turnbull’s first stint as Liberal party leader came to an end when he stood up for an emissions trading scheme. Julia Gillard was weakened by Tony Abbott’s incantations about the carbon tax. As prime minister, Abbott just didn’t care about the climate.

Malcolm Turnbull sits precariously in the polls. It’s not a good time to start talking about the drastic measures that developed and developing nations would need to take to prevent the onslaught of climate meltdown. (Instead, an easy political win is orchestrated with a renewed effort to abolish the rightly unpopular GST on tampons and other sanitary products.)

With Newspoll favouring the opposition at the next election, no one wants to talk about the positive impact on the environment winding down coal mining would have, or significantly limiting the number of litres of petrol we can buy. With Newspoll the way it is, the great grandkids will just have to rely on more air-con in those nasty hot summers they’ll face.

Politics is not equipped to tackle climate change. The kind of vision we need just doesn’t cut it with the focus groups.