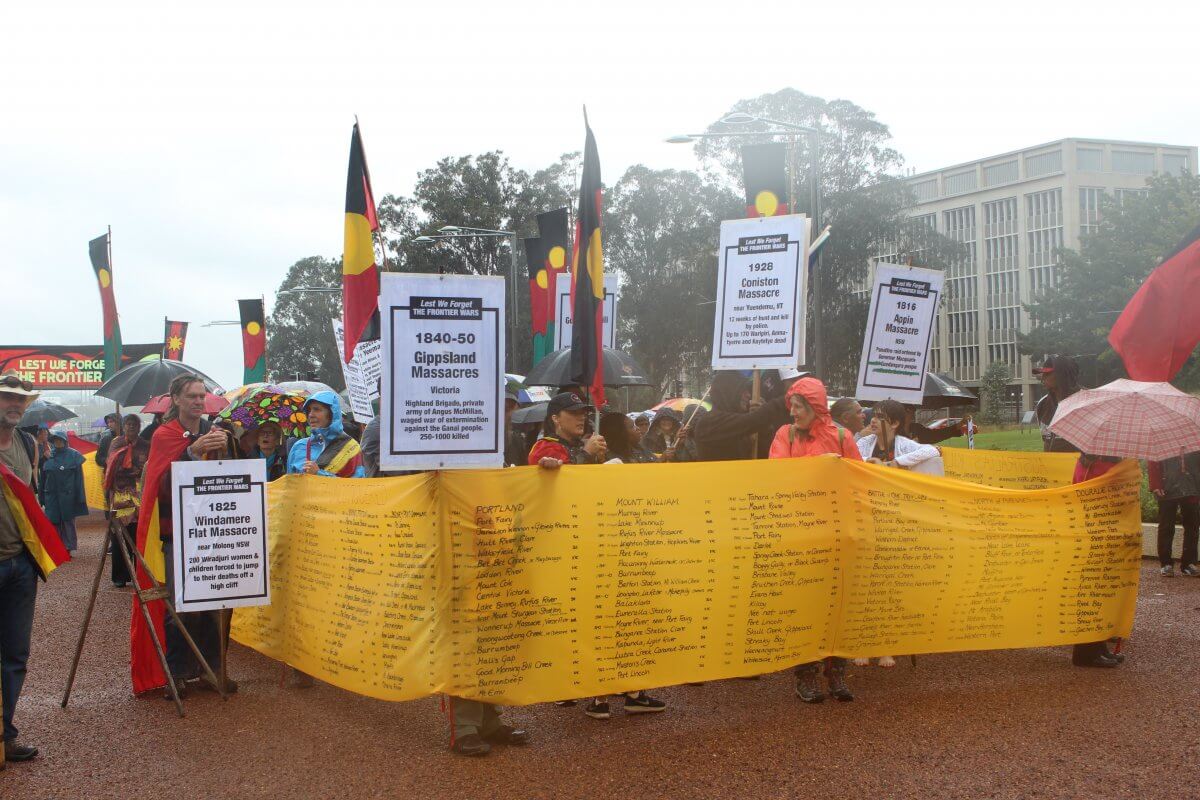 Lest We Forget: The Frontier Wars

Warrandyte, Melbourne. A stone war memorial rests amongst native flora. On the eve of Anzac Day, 2017, residents discovered that the shrine had been defaced with one explicit message: ‘war is hell’. The graffiti was a protest. It attempted to subvert the prevailing notion that Australia’s national identity was born through a display of sacrifice, heroism and mateship on the shores of Gallipoli in 1915.

At an institutional level, recent debates surrounding the place of the Frontier Wars in Australian military history have prompted the Australian War Memorial (AWM) to shift its interpretative remit. In this case, grassroots movements have largely orchestrated the renegotiation. On Anzac Day, this year, protesters from the Aboriginal Tent Embassy attempted to recast the traditional narrative with a more nuanced understanding of a past that began long before 1915. Observing the interaction between these two competing narratives is one prism through which to comprehend the changing nature of Anzac commemoration in contemporary Australia.

On Australia Day 2017, the Indigenous Australian hip-hop duo A.B Original saw their politically charged anthem ‘January 26’ ascend to number 16 on the Triple J Hottest 100 chart. The song’s success, on the very day it protested, revealed how contentious debates over the Frontier Wars have risen to prominence within public discourse. In recent times, Australian historians have frequently described the relations between colonial settlers and Indigenous nations as a state of war. Many of these historians have called upon the AWM to recognise the Aboriginal and Torres Strait Islander people who died defending their lands against colonial invasion between 1788 and 1928. Media outlets, too, have increasingly urged the AWM to formally recognise the Frontier Wars by way of a permanent gallery.

Within the colonial galleries of the AWM, frontier conflict receives a cursory overview. Most recently, the Memorial has opened the temporary exhibition, For Country, For Nation. As described by the AWM, this exhibition seeks to portray the ‘Aboriginal and Torres Strait Islander experience’ during ‘wartime and peace’. Notably, the Frontier Wars are frequently and overtly referenced throughout the exhibition. Permanently positioned outside this exhibition is Rover Thomas’ painting, Ruby Plains Massacre 1. In this painting, Thomas depicts the aftermath of an Aboriginal massacre perpetrated by a station-owner in the Kimberleys, Western Australia. These installations directly acknowledge frontier conflict.

When asked in a personal email, Dr Brendan Nelson, the director of the AWM, stated that the acquisition of Rover Thomas’ painting is to directly recognise the ‘Aboriginal perspective of colonial violence and dispossession’ that occurred during the Frontier Wars. Interestingly, this particular focus has only been recently adopted. In fact, when questioned on the inclusion of the Frontier Wars, in 2013, Nelson stated that ‘the Australian War Memorial is not in my very strong view the institution to tell that story’. It seems that the AWM’s interpretative approach is caught between two competing historical narratives – the progressive perspective of frontier conflict and the existing narrative.

Information from memorial staff sheds light on this tension. When asked in person, Chris Wagner, head of marketing and communications at the AWM, admitted that the identity of the institution is in a ‘transitioning phase’ amongst a changing political and military landscape. In Wagner’s eyes, the Memorial recognises frontier conflict only insofar as it provides the ‘social context’ for Indigenous servicepeople ‘who continued to sign up and fight within living memory of this tragic and awful time when massacres occurred’. Outside of providing this context, Wagner is ‘unsure’ if the AWM is suited to ‘tell the important story’ of the Frontier Wars.

These novel interpretative gestures illuminate the changing nature of Anzac commemoration. For one, it demonstrates that contentious cultural issues, which directly impact the fabric of national identity, are an impetus for a reinvention of the Anzac narrative. In 1979, historian Geoffrey Reynolds suggested in an internal report that the AWM would need to formally recognise the Frontier Wars within 10 years. Nearly 40 years on, the current state of affairs highlights a delay between the emergence of cultural contentions and a shift in interpretative practices. This suggests the current shift is not iconoclastic. In this respect, the AWM may be shackled to conservative roots and thus particularly resistant to change.

Of course, conservative commemorative influences are not insurmountable obstacles to formal recognition of the Frontier Wars. Despite being contained within the traditional narrative, these interpretative gestures directly allude to limitations with the conventional Anzac narrative. By operating on the border of critique and reverence, the institution is attempting to forge a new interpretation of the Anzac narrative that operates outside the purview of contentious issues yet can be understood in traditional terms. This attempts to avoid contentions altogether. Arguably, this particular shift suggests that reformist voices are remoulding the institutional narrative by wedging progressive ideas into conservative frameworks. It might equally indicate that conservative forces are resisting a total redefinition of the Anzac narrative.

Saul Alinsky’s renowned handbook Rules for Radicals declares that ‘no politician can sit on a hot issue if you make it hot enough’. On Anzac Day 2017, a grassroots protest channelled Alinsky’s advice by attempting to recast the conventional Anzac narrative in the terms of a deeper past. For the first time, Indigenous servicepeople lead the official marches. As this occurred, however, counter-marchers from the Aboriginal Tent Embassy unofficially conjoined themselves to the formal commemorations.

Smoke erupts from a simmering campfire at the Aboriginal Tent Embassy. Before the march embarked, a group of protestors, huddled around this fire, engage in vigorous political debate. From the discussion, I became aware that each individual viewed Anzac commemoration through a unique lens.

One hour later, as the march commenced amidst the patter of rain on Anzac Parade, these individual perspectives were welded into a united entity. The unity was solidified by an imposing banner that proclaimed the overarching message of the protest – ‘Lest We Forget: The Frontier Wars’. The physical formation of the group was further cemented by seven long banners which collectively listed every known massacre committed against Indigenous Australians during the Frontier Wars. Three wreaths, carried at the front of the formation, paid direct homage to Indigenous people slain in defence of their land.

Liaising with police whilst coordinating the march stands the eminent Aboriginal leader, Michael Ghillar Anderson, who envisaged and organised the first counter-march five years ago. From his perspective, the protest sought to initiate change by drawing attention to the ‘killings perpetrated by colonial settlers’. When questioned, Anderson noted that the Memorial is circumspectly incorporating frontier conflict into its interpretative practices because ‘there are serious legal and political implications that flow from recognising what really happened in this country’. Still, he believes that interpretative shifts within the institutional narrative can be augmented by grassroots movements.

Rather than entirely subverting the dominant interpretation, the protesters sought to realign the trajectory of contemporary commemorative culture by redefining the Anzac narrative. To achieve this, the protesters followed the last group of official marchers headed towards the AWM. They passed spectators who had gathered to recognise the overseas service of military servicepeople. Consequently, the list of massacres was conspicuously injected into the formal realm of official Anzac commemoration. Some spectators clapped in veneration. Others looked upon silently. Regardless, every spectator was made cognisant of the competing Anzac narrative. No protestor spoke a word. Looking around, I saw each individual was caught in a moment of reflection. The ambience of the protest was as solemn as the official commemorations.

Upon reaching the summit of Anzac Parade, the marchers were obstructed by a blockade of police. They were denied entry into the pantheon of national heroes. As the formal proceedings continued, the protestors from the Aboriginal Tent Embassy peacefully stood at the border dividing the institutional and grassroots narratives. When the Anzac Day ceremonies concluded, the general public were invited to lay wreaths. On behalf of the counter-marchers, Michael Anderson, amongst others, placed the memories of fallen Indigenous peoples onto the shrine outside the AWM. In this small and powerful gesture, the recognition of frontier conflict had pierced institutional barriers and breached an intensely public space.

The interaction between the two competing narratives demonstrates that grassroots movements can apply external pressure to the institutional narrative. Still, the AWM holds the principal power to enact shifts in Anzac commemoration. In this way, grassroots forces remain vital in setting the terms in which institutional interpretation is contained. At some point, the incremental achievements of grassroots protests will culminate, and subsequently prompt, a watershed moment that will realign the trajectory of the institutional narrative. Only then will the Memorial provide the recognition of the Frontier Wars that is so profoundly overdue.

I am indebted to the ANU School of History for the continuing support and intellectual inspiration.