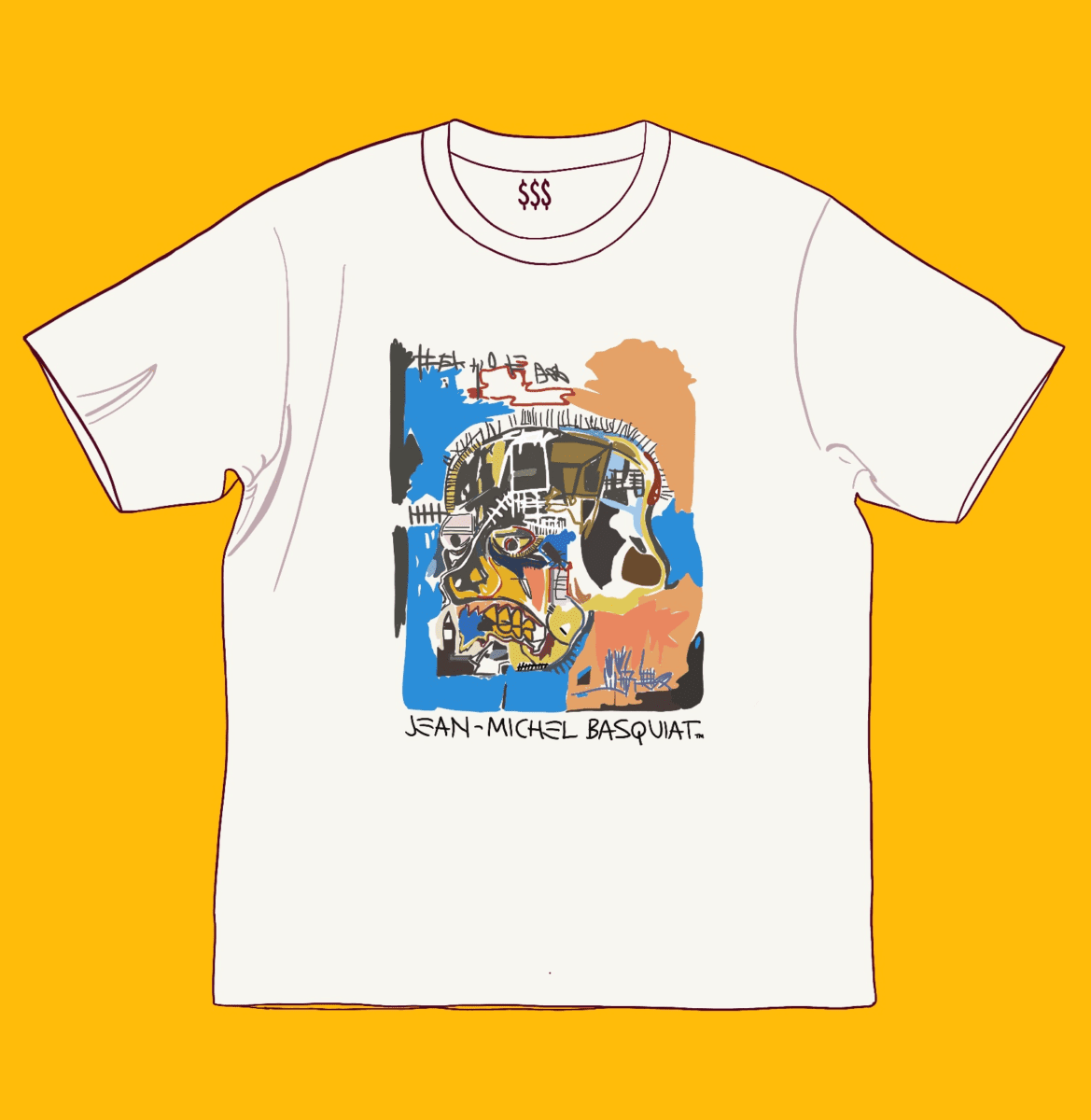 You either die a tortured artist or live long enough to see your work printed on sneakers and phone cases. Unless you are Jean-Michel Basquiat, in which case you’ll do both.

More than thirty years after his premature death at the age of 27, the work of Basquiat remains highly visible in our society, particularly through consumable items. Should you wish to purchase an original Basquiat, you may find the $110.5 million price tag too steep. For a cheaper, more commercial equivalent you could turn instead to Casetify, Uniqlo, Urban Outfitters, Converse, Dr Martens, Supreme, Coach, or Yves Saint Laurent amongst others. All of these corporations have in recent times collaborated with the Basquiat estate on merchandise. It is invariably claimed such products demonstrate shared values between the late artist and their own brands.

The connections made between brands and Basquiat are tenuous and highly debatable. The narratives spun by marketing executives attempting to justify the appropriation of a highly critical body of work for a tote bag will always be ones which leave a sour taste in the mouth.

Tiffany & Co.’s most recent ad campaign, ABOUT LOVE, starring Beyoncé and Jay-Z and featuring Basquiat’s Equals Pi is one such egregious misappropriation of his work.

Equals Pi has been owned by private collectors since it was first displayed in 1982. Since then, it has been visible to the public only through magazine covers, where it was used as a prop for the cultural clout of its owners. Tiffany & Co. acquired the piece in August 2021 and then themselves placed it nonchalantly in the background of their ad behind Beyoncé for eight seconds total. Again, using the work as a piece of mise en scene, a mere prop for cultural clout.

The most outrageous element of Basquiat’s inclusion in this campaign occurred when the executives claimed the colouring of the painting was an intentional homage to Tiffany & Co. by Basquiat. His assistant Stephen Torton, who mixed the colours for Equals Pi, called this claim “absurd” and noted:

“They wouldn’t have let Jean-Michel into a Tiffany’s if he wanted to use the bathroom, or, if he went to buy an engagement ring and pulled a wad of cash out of his pocket. We couldn’t even get a cab.”

As Torton explained, corporations like Tiffany & Co. “speculate and monetize, commercialize and manipulate every manifestation of this rebellious genius … leave deciphering his message to those who know or leave it alone.” Reader, now I will make it so you are one who knows.

In 1978 Basquiat undertook his first organised venture as an artist. SAMO (short for Same Old Shit) was a graffiti moniker he adopted as a late teen with classmate Al Diaz. The duo had something to say and the walls and subway tunnels of Manhattan acted as a megaphone for their provocative and satirical messages. On the project, Diaz said: “[SAMO’s] art was meant in part to be satire on corporations.”

“SAMO AS AN ALTERNATIVE TO MASS-PRODUCED INDIVIDUALITY”

“SAMO AS AN END TO MINDWASH RELIGION, NOWHERE POLITICS AND BOGUS PHILOSOPHY”

“SAMO FOR THE SO-CALLED AVANT GARDE”

Following a falling-out between Basquiat and Diaz, in 1980 Basquiat scrawled SAMO IS DEAD across the walls of SoHo. This signalled the death of the partnership and the birth of Basquiat’s solo career. Two years later, following bouts of homelessness, Basquiat would make his first acquaintance with the deep pockets of art dealers and buyers. His first solo art show was hosted by the Annina Nosei Gallery in 1982 and he made $200,000 in one night. His profile and praise in the art world multiplied from this point onwards, however, so too did his critics.

No level of success as an artist relieved him of the oppression he faced as a Black man living in America in the 1980s. Systems of inequality had long been his inspiration though, and racism and class inequality featured heavily in his work at all points of his career. Basquiat’s art celebrated Blackness and frequently depicted Black protagonists in a world saturated by white artists and their white subjects. The stories he told centred around the experience of Black people in America, exploring the legacies of the slave trade, Jim Crow laws and police brutality. I highly recommend inspection of pieces such as The Guilt of Gold Teeth, Irony of the Negro Policeman and Untitled (History of the Black People).

His novel subject matter led sceptical critics to claim that Basquiat’s success was due to virtue signalling by the art world. In a time-honoured racist tradition, Basquiat’s success was attributed to the kindness of white people, rather than his own talents.  According to his critics, Basquiat was not brilliant but rather was fetishised by the liberal-minded elites of a world he had no business being a part of. He was not a great artist, nor a pioneer of neo-expressionism, but someone whose “contribution to art is so miniscule as to be practically nil,” says Hilton Kramer.

The allegation of virtue signalling and this dismissal of Basquiat’s merit represents an incomprehensive assessment of his personal history. Basquiat came from a middle-class family and received an extensive education in art and art history, both from his mother and from institutions for gifted children. He spent his childhood in galleries and museums and was keenly aware of the cultural moment that his work was situated in. He took every opportunity afforded to him by SAMO, and his work both as graffiti and on canvas offered sharp political commentaries.

He was defined simultaneously as too much of a ne’er-do-well outsider to contribute any meaningful culture to art institutions; and too much of an insider to middle-class privileges to offer any meaningful critique on inequality. His critics diminished the extent of white saturation in art and culture and decreed thus that Basquiat had no licence to be as critical as he was. Both of these characteristics represent a minimisation of the oppression faced by Black Americans in the 1980s. Their absence and exclusion from art institutions only furthered this erasure of the Black experience, a subject featured frequently in Basquiat paintings.

The fact that he walked in both worlds, simultaneously as an insider and an outsider to high art institutions, was consistently ignored. Basquiat’s lived experience as a subject of oppression and his knowledge of art and its history made him uniquely situated to pioneer neo-expressionism. He reinvigorated the art world. His pieces were highly referential to both high and low culture, ranging from ancient poets to cartoons, and were always deeply critical. The success of his work represented an important step forward for American society. He pushed the struggles of Black people and the working class in front of the eyes of American cultural elites

His audiences could no longer look away from his art or the stories that the canvases told.

And yet now it seems we can, and we do.

The Guilt of Gold Teeth is a painting which offers the exact critique you would expect from the title. In November 2021 it was sold to a private buyer for $40 million. Troublingly, none of the involved parties seem to appreciate the nauseating irony of such an arrangement. Like Equals Pi, The Guilt of Gold Teeth will sit in someone’s home or personal archive for many years to come. You and I will likely never see either of these paintings in person and their cultural impact, having been hidden away, will be blunted if not entirely nulled.

Lucky for us though, corporations have got us covered and there’s a good chance we could buy a t-shirt with Irony of the Negro Policemen printed on. Or we can check out that eight second feature in the Tiffany & Co. ad to see the deferential treatment of a great artist!

Perhaps the commercialisation of Basquiat is the most offensive because of how exclusive his work is in the modern day. The majority of it exists in private collections, where it is inaccessible to the eyes of the public. Only the incredibly wealthy owners of these paintings will get to appreciate their message through the visceral and unfiltered medium of human eyes. His critiques of inequality cannot inspire us from within the walls of white mansions. We have to settle instead for capitalist bastardisations.

How does hiding away his work allow us to learn from Basquiat’s genius? How can any piece of cheap merchandise or eight second feature ever honour such a brilliant man?

Basquiat grew up wandering the halls of museums and galleries and gazing upon works either made by white artists, or stolen from artists of colour in the violent processes of colonialism. During his lifetime, thanks to the proliferation of reductive narratives about his merit, he did not get to see his art hung up on such prestigious walls. We cannot learn from his work as he learned from the work of others when it is hoarded and hidden by private owners. The use of his work now as a non-contextualised prop or eye-catching print on merchandise, does not do justice to his radical creativity.