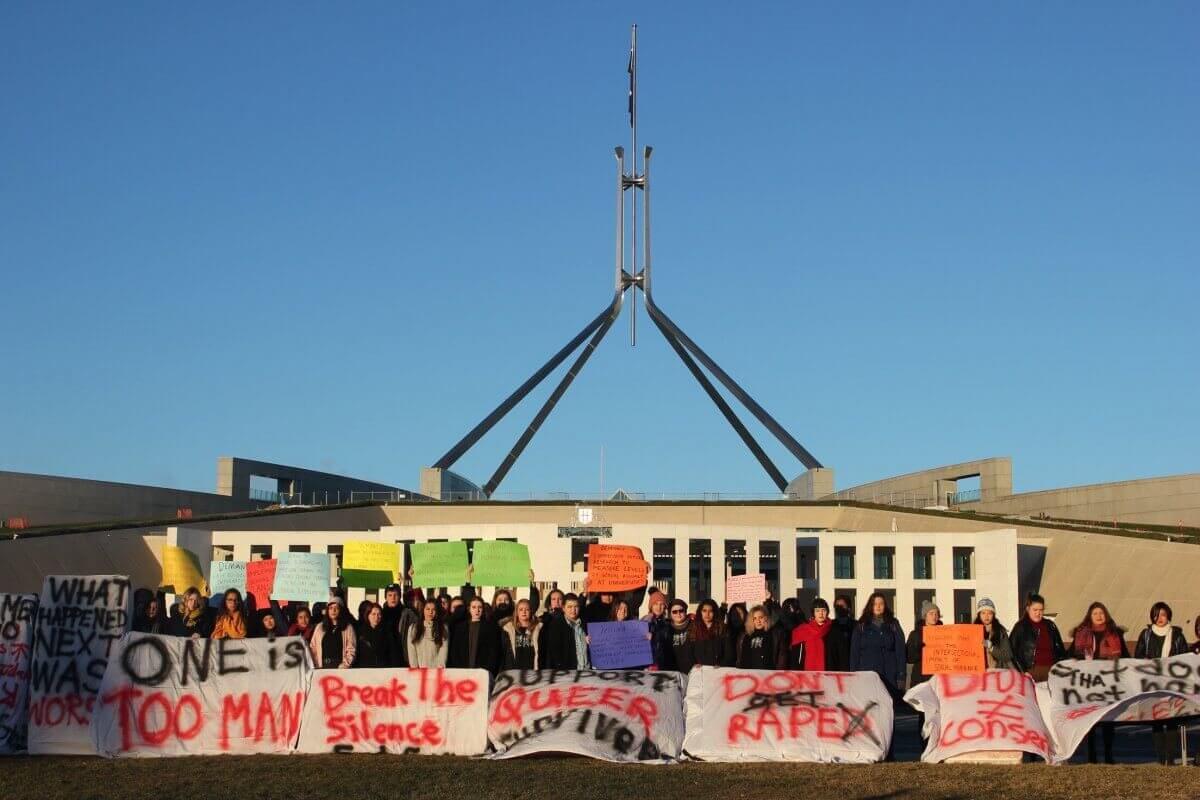 19.8.2017 by Freya Willis
CW: mentions of sexual assault and the AHRC survey.

Tanika Sibal was a member of the organising committee of the Network of Women Students Australia (NOWSA). NOWSA is the annual conference for women and non-binary students which took place at the ANU from 17-21 July. On the final day of the conference, women and non-binary students dragged mattresses up to the Parliament House to demand government and university action on sexual assault. Tanika along with Freya Willis spoke at the protest. Freya sat down with Tanika to discuss the protest.

What was the protest at Parliament House about?

The protest at Parliament House was about lobbying the government to implement our 12 demands in order to improve the way that incidents of sexual assault are dealt with at universities. The 12 demands are:

–          To provide respect, consent and bystander training for all university and college staff and students

–          To implement sexual misconduct plans in all universities.

The protest was run as a part of the Network of Women Students Australia 2017 conference and was timely, being just under two weeks before the launch of the results of the AHRC survey. The mattresses represent the burden that sexual assault survivors carry with them around campus.

Emotional and intense, but in a positive way. Lots of tears were shed, but it was also such a powerful thing to feel like you were involved in something huge, something that’s working to create positive change. There was a large sense of community, with all of the attendees being supportive of one another and knowing that we were all working together for a common goal – ending sexual assault.

What went into organising the protest?

This goes without being said, but a lot of planning (laughs)! One of the biggest tasks for the protest was acquiring mattresses – we spent a lot of time on gumtree and in K-mart.

Throughout the NOWSA conference attendees had the opportunity to spray paint messages on to the mattresses, which really allowed everyone to give it their own personal touch.

Another big component of organising the protest was managing the media. My fellow organiser Emma put her sweat and tears into this. As Freya can also attest, one of the difficulties with the media around this issue is that they always want to hear the stories of survivors, but this can be a really difficult thing to talk about. Emma and Nina Funnell, who were speaking at the conference, had to manage media sensitively and were taking dozens of calls a day and vetting them. This was all so that survivors weren’t hounded with calls and requests for interviews.

What have you learned about campaigning?

I learnt a lot about campaigning, not only from the protest but also from NOWSA as a whole. One of the biggest things I’ve learnt is to firstly pick your battles but then not giving up on the ones you have picked. It’s vital to take time out and engage in self-care, especially if that means it will prevent you from giving up.

Why do you think the protest was important? What did you take away from it?

The protest was crucial to engage the government and get the government’s help to reform how universities deal with sexual misconduct. It not only gave a platform for women and non-binary students to come together and take action against wrongdoings, it also provided a voice to many student leaders.

Personally, I was very empowered by speaking at the protest. My speech sparked an increase of discussions about sexual assault within my extended family, which is something I honestly did not envisage happening at all, let alone now. I’m very proud that I could start such discussions within my community.